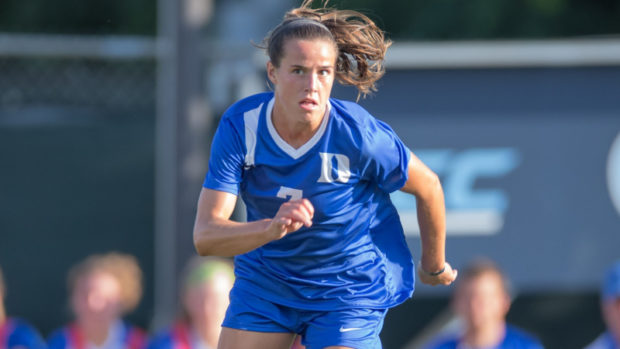 Freshman Taylor Racioppi passed up the U-20 World Cup to stay the course with her academic career at Duke. (Photo: Duke Athletics)

It has not been a typical year for Taylor Racioppi.

It started late last spring when the Duke University sophomore had to choose between playing for the Blue Devils or playing for the United States in the Under-20 Women’s World Cup. She couldn’t do both. Priorities of the two institutions were conflicting and players invited to U-20 camp, Racioppi included, had to choose.

The U-20 World Cup kicks off on November 14 in Papua New Guinea, the same times as the NCAA tournament heats up.

Racioppi had to weigh all the factors. She was a veteran of the U-20 national team, the second-youngest player on the roster at the 2014 U-20 World Cup in Canada. She had played for the U-19, U-18, U-17 and U-15 national teams. But last fall as a freshman, she led Duke in points and helped lead the Blue Devils into the NCAA final where they fell to Penn State.

“To be a freshman in college and to have that be your first year of college soccer, that was absolutely incredible,” says Racioppi.“Obviously, it was a tough road. No team gets there easily. That was something I will never forget. I hope I can top it here at Duke with the amazing team we have this year. Last year was so exciting and we got so close, but I have a feeling we are going to get pretty close this year, if not do that whole thing.”

But take away the on-field factors, and her choice was clear.

“I decided to stay at Duke this semester, and that was for academic purposes,” she says. “I found out kind of late last spring that Duke was not going to allow me to enroll. I talked it over with some of my advisers. I had set myself up pretty well with the classes I want to take, so that was a huge factor. I decided that not being able to enroll as a student for the semester would be a huge, huge hit to my academic goals and where I want to end up down the road.

“Right now, and as always, soccer comes behind family, health and school work,” Racioppi explains. “It’s always been that order for me. Your health and your family are really important. Academic success and making sure you are learning and being engaged in class has always come before anything on the soccer field. I think that says a lot with how much of my life I devote to soccer, I still don’t rank it first.”

She had three goals and five assists in the Blue Devils first 11 games, helping Duke to a 7-2-2 start. But she suffered a lower-leg injury and has been sidelined for all of October. She is listed as day-to-day so as her team tries to duplicate last year’s run to the College Cup, she watches.

Racioppi watched her Duke teammate Ashton Miller give the Blue Devils the lead in an ACC quarterfinal match on October 30. She watched Florida State’s Deyna Castellanos tie the game less than three minutes into the second half. She suffered from the bench through regulation and the extra 30 minutes of overtime, then watched in horror as Seminole goalkeeper Cassie Miller saved two of the Blue Devils first three attempts and the third went wide. And there was nothing she could do about any of it.

As the Blue Devils wait to find out their place in the NCAA tournament (update: see the full 2016 NCAA bracket), she spends her time away from classes rehabbing her injury. That time is spent just like she spends all her time – learning.

“I have a curious mind,” she says. “Whatever keeps it busy and keeps me learning usually appeases it.

She found her curious mind could be adequately fed by science. She qualified academically to attend the prestigious Academy of Allied Health and Science in Neptune, N.J., and was hooked.

“I’ve always thought that the combination of sport and science is really intriguing,” she says. “The body is fascinating. Everything it can do for itself is pretty cool. Growing up, I had some injuries playing soccer, and it’s always intrigued me how you can hurt yourself and then recuperate and come back better, healthier and stronger. But I am also intrigued about nutrition and body balance in a sense that I am already healthy, how can I even reach that next level. That all has to do with medicine, body systems, muscles, and your brain. All that together really prompted me to look into medicine.”

She came to Duke with the intention of becoming a doctor, and that’s still a possibility. But a funny thing happens when a 19-year-old with a growing social conscious and a brain like sponge is exposed to one of the top universities in the world and all it offers. They discover the wide range of options in front of them.

“Duke is the type of institution that has allowed me to explore so many other things,” she says. “Right now, I’m dabbling in marketing and global health and all these different routes. It’s been really fun. If you look at the connection between sports and medicine, there is also a parallel between sports and marketing. So I think the global health and marketing is really interesting because sports is a big piece of that. I think the possibilities are pretty much endless with where I could go with global health, marketing and soccer.

“I haven’t traveled much for leisure or pleasure,” Racioppi adds. “All my travel has been for soccer, and that has taken me to some absolutely amazing places. But there is a huge, huge part of me that wants to go see the world, which is why I am looking into international comparative studies at Duke and just learning about the world. All those things pretty different when you list them off but there are a lot of interesting parallels.”

And there is always soccer. Racioppi absolutely loves the game. That much is obvious from watching what she does with the ball, running with it, chopping and cutting it to frustrate defenders, smacking it from distance.

In the meantime, she has to watch as she rehabs her injury while memories of last year’s run to the NCAA title game keep popping in the heads of her and her teammates.

“It’s certainly lingering in every person’s mind, and for that reason it makes it hard to avoid the subject,” she says. “But I think our team has done a really good job of focusing on the present and focusing on what needs to be done today and tomorrow and not a month from now.”