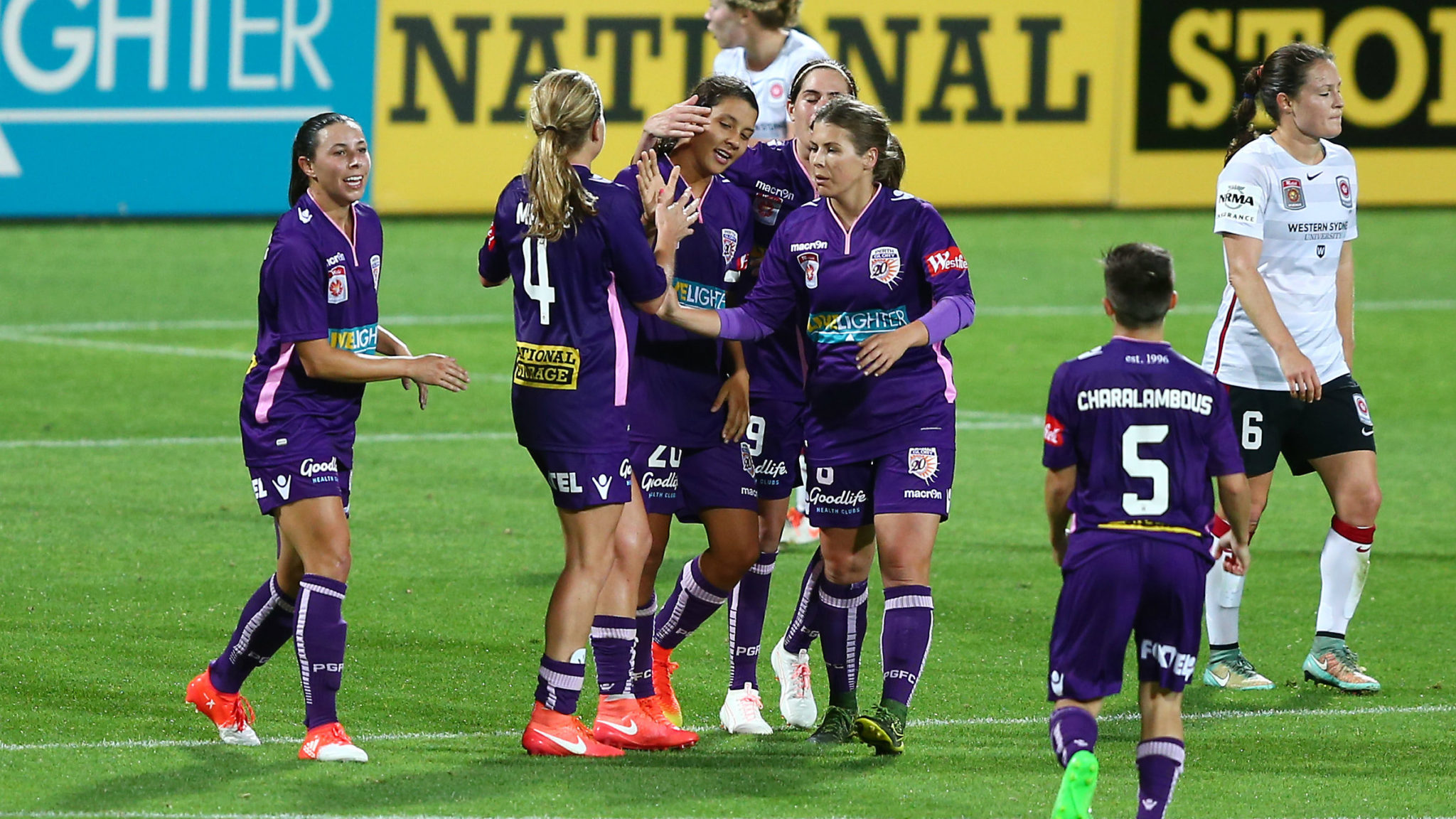 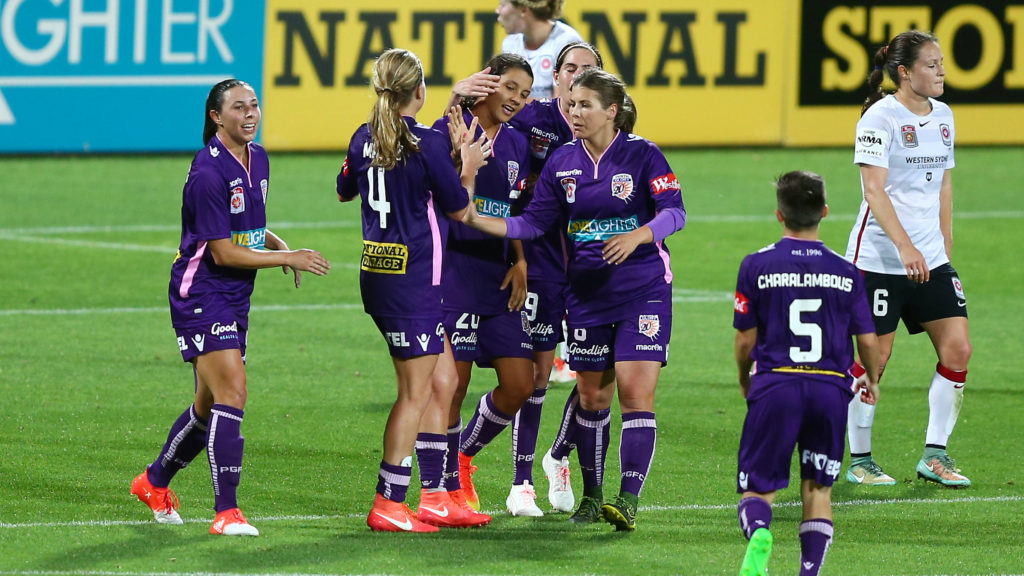 Kerr’s brace came in Perth’s NIB Stadium on Sunday, when the home side Glory defeated Western Sydney Wanderers, 4-2 before a solid crowd of 2,011, powered by two second-half goals by Kerr (Sky Blue FC). Caitlin Doeglas and Rosie Sutton added first-half goals by Perth, countered by tallies from Jo Burgess—the former Australian international who returned to the Red and Black after two seasons off, having retired from the game—and Helen Petinos. NWSL imports Kerr, Alyssa Mautz and Nikki Stanton all played 90 minutes for Perth, as did Mexican international and former NWSL player Arianna Romero. Vanessa DiBernardo played the last half hour for the purple-clad side that she did so well with last winter. American loan players Kendall Fletcher, Alex Arlitt and Paige Nielsen all played 90 minutes for Western Sydney.

On Saturday November 5, Brisbane Roar won at home 2-1 versus Sydney FC before a stand-alone W-League game record crowd of 3,105 at Spencer Park in Brisbane. Allira Toby scored on her Roar debut in the second half with her first touch of the ball on a header and Australian international striker Katrina Gorry scored the winner for the Roar.

[GRAINEY: A look at where NWSL players are headed in Australia this season]

Toby played during the offseason for semi-pro side Brisbane Olympic and last season for Adelaide United. Sydney FC’s Caitlin Foord scored the league’s first goal of the season early in the second half. Maddy Evans, on loan from the Orlando Pride, played all 90 minutes for Brisbane, as did NWSL-tied Australian internationals Alanna Kennedy, Kyah Simon and Foord for Sydney.

On Sunday, Adelaide United and Melbourne Victory 3-3 tied in Adelaide before a strong crowd of 2,013, in an exciting game which included six minutes of injury time at the end of the second half. Stella Rigon and Adriana Jones—who joined from Newcastle Jets this season—and Brazilian defender Monica (on loan from Orlando Pride) scored the Adelaide goals while Dowie (Boston Breakers) scored a brace for the Victory and Selin Kuralay (ex-Florida State and former Matilda) added a third goal for the Victory, who came from behind three times in the match.

The vibrant play of both sides and a point gained can be interpreted as a good sign for both teams; Adelaide managed their first tie (with two wins) in 14 games in their series with the Victory, while Victory scored three times, after only scoring 10 goals all last season—two by Dowie as a late season addition. Monica and the three Chicago Red Stars imports—Danielle Colaprico, Sofia Huerta and Katie Naughton—played the entire match for Adelaide. For Melbourne Victory, NWSL players Samantha Johnson, Bianca Henninger in goal, Christine Nairn and Dowie started the game and played all 90-plus minutes.

Also on Sunday, Melbourne City defeated Newcastle Jets 1-0 at home in front of 633 fans. Marianna Tabain scored an early goal—the 28th of her W-League career and 8th for City—as the reigning champions continued their remarkable string of never having lost a W-League match. Defender Megan Oyster, who played with the Jets last season and was a U.S. youth international, and goalkeeper Kelsey Wys, joined the side on loan from the Washington Spirit. NWSL loan players Lydia Williams in goal, Lauren Barnes and Laura Alleway in defense, Steph Catley and Jess Fishlock in midfield and Erika Tmyrak at forward all started, with Tymrak being substituted out in the 83rd minute and Catley during second-half injury time. Wys, Oyster, Arin Gilliland and Jen Hoy all started for the Jets, with Hoy being subbed out in the 89th minute.

For round 2 next weekend, on Saturday, Nov. 12, Canberra United hosts Melbourne City and Perth is again at home versus Brisbane. On Sunday, Nov. 13, Sydney FC hosts the Harbor City derby versus Western Sydney and Melbourne Victory entertains Newcastle Jets. Adelaide United has the week off.