Canada stars combining on iS4 initiative 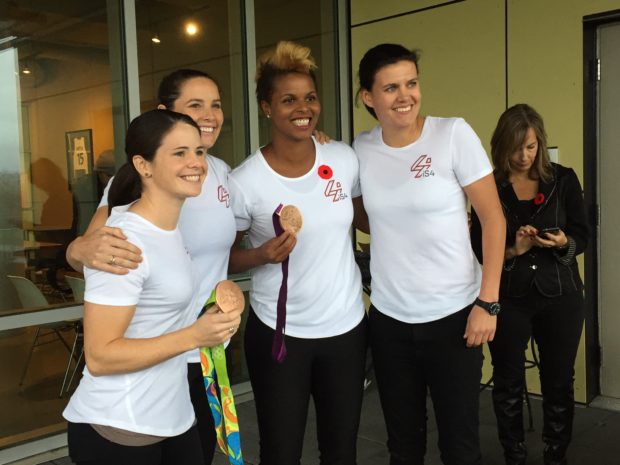 VANCOUVER, B.C – It’s not easy to become a professional athlete. You have to work hard, put in hours and hours to hone your craft, and have the necessary support from your family and friends. The financial costs are astronomical and many kids can’t afford to play sports and attend camps. Christine Sinclair, Karina LeBlanc, Rhian Wilkinson, and Diana Matheson have come together to launch iS4 (I Strive Four) and have partnered with Canadian Tire’s JumpStart program to give back to the kids across Canada.

The concept of empowering others through soccer camps, speaking engagements, workshops, and team building first popped up after Canada won bronze at the 2012 London Olympics. Matheson and her business partners want to reach and help out a larger demographic of kids with this new initiative.

“From 2012 on, we knew we wanted to share the medal with as many people as possible,” said Matheson. “When we were running our own camps, we quickly found that for four of us to do that, we were kind of limited to major cities with lots of people. Socioeconomically it was kind of the wealthier kids that were able to come to our camps. JumpStart opens the door to so many kids and so many more communities, and takes the financial burden away from the kid.”

The cost of living is always climbing and quite often parents struggle to find extra money to put their kids into sports camps. Not being able to send a child to a soccer camp could easily dash away the next great Canadian soccer player. You never know what kind of impact a Sinclair, LeBlanc, Wilkinson, or Matheson could have on a young athlete that needs some extra bit of coaching and encouragement. If Christine Sinclair was a young soccer player in this era, she probably wouldn’t be able to afford a soccer camp.

“It’s been a work in progress,” admitted Sinclair. “It’s been four years since the concept was sort of put together. The past year we’ve really bunkered in, got the work done, and picked a name. Today I’m here, just very proud of all the work that we’ve done. Obviously being able to partner with JumpStart, and give back to the kids, that’s the part I’m most excited about. I know if I was a kid, I wouldn’t be able to afford to go to camps. My favorite part is the interaction with the kids.”

Karina LeBlanc is currently the only member of the four who has hanged up her boots. Matheson and Sinclair plan to continue playing, and Rhian Wilkinson is deciding her future. iS4 will be planning kids camps in the new year. The break between the Olympics and 2019 World Cup in France will allow more opportunity for iS4 to get off the ground and into communities across Canada. While it’s off in the distance, you could also see the likes of Kadeisha Buchanan, Ashley Lawrence and Jessie Fleming involved in some aspect. It’s early days at the minute, but something perhaps down the road.

“It’s actually something we’ve discussed a little bit,” revealed Sinclair. “Maybe it is something where we could bring in some of the younger players, and help out with camps and sort of pass the torch. In terms of a company, we haven’t really discussed it in too much depth. Yeah, I think we’d love to have some of them out and help us with camps.”

2016 FIFA Women’s Coach of the Year nominee, John Herdman was in attendance to share his stories and lend his support to iS4. Herdman is a master motivator and isn’t short on confidence. Despite being up for this award, Herdman won’t be lending his learnings and coaching expertise at future kids camps. The 41 year-old was giving all the praise to his players and coaching staff for his nomination.

“This is the third time and I always look at these sort of nominations as a testament of the work that the players have put in, and that my staff have put in. At the end of the day, I’m just a cog in the wheel. If you’ve got to look for awards like this for confidence than you’re in the wrong industry (laughs).”

After Canada’s surprise medal at Rio, could the third time be the charm for John Herdman?

“I mean it better be,” said a confident Sinclair. “Someone like Silvia Neid obviously is up there in the chances of winning. I look at what John has done for our national team and the way he’s transformed us over the past five years. Our performance in Rio I think spoke for itself. Beating some of the best teams in the world, back, to back, to back. I’d actually be very shocked if he didn’t win it, he totally deserves it.”

Oakville, Ontario native Matheson thinks Herdman could have some stiff competition especially after Germany sent Coach Silvia Neid off into the sunset with a gold medal at the 2016 Rio Olympics.

The top ten 2016 FIFA Women’s Player of the Year nominations were announced last week and to nobody’s surprise, Christine Sinclair has made the list. The always humble Portland Thorns FC striker has once again made a huge impact for her club and country. Sinclair is still consistently Canada’s top offensive threat, and being nominated really means a lot.

“It’s been alright,” said a modest Sinclair when asked about her productive year. “It’d obviously would be a huge honor. On the personal side, it’s been a rough year. To possibly be recognized, it’d be a huge honor. It would just go to show the progress our team made. We were incredible all year, and as a forward, you tend to score some goals when that happens (laughs).”

Having Sinclair and Herdman both nominated after Canada’s most recent bronze medal has gone a long way in recognizing the development and achievements Canada have made on the pitch. Shockingly, the duo was not nominated following the 2012 London, Olympics. It was a snub that Herdman recalls.

“After London I was surprised. I think a lot of us were surprised that myself and Christine weren’t shortlisted. I don’t really know how it works, what happens, and who makes decisions. At the end of the day, it really doesn’t matter to us (laughs). I’m pretty focused on where I need to get to as a coach. I still think there’s probably better coaches out there working with way less resources, in way worse circumstances, having a bigger impact on the world of coaching. These awards are what they are.”

Thinking of others, helping others, and giving back is the typical Canadian way. Sinclair, LeBlanc, Wilkinson, and Matheson want to make sure they help the next generation so there isn’t a gap in kids having the opportunity to thrive. If John Herdman does win 2016 FIFA Women’s Coach of the Year he might also be in a giving mood, he’s already had jump-start by tossing a medal into the stands earlier this year.