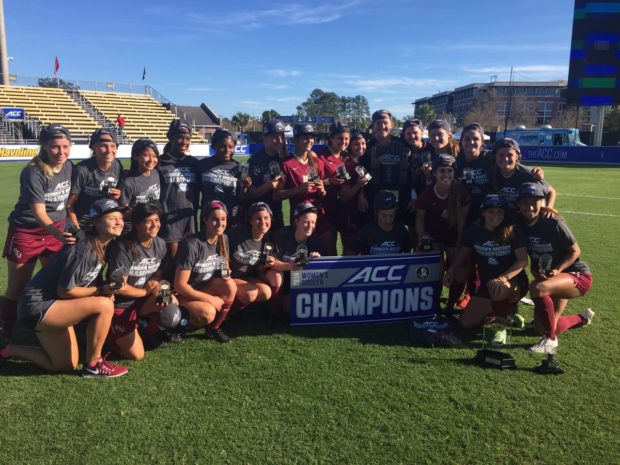 Florida State defeated North Carolina 4-3 in a penalty kick shootout to be crowned the ACC Tournament Champions. The Seminoles have now won the tournament four years in a row and five of the last six years.

The match was pretty evenly contested and remained scoreless throughout its 110-minute duration. Only 15 shots were taken all match and only seven of those were on goal, with FSU leading UNC by one in both categories. The low number of shots and lack of goals was partly because of strong defense and heavy pressure from both sides, but also because both teams struggled to get numbers ahead of the ball to generate any strong attacking plays.

In the first half, neither team saw many trips into their attacking third,, and only a couple of shots were taken in the first 45 minutes. It appeared as though UNC may have scored the opening goal just minutes into the match, but an offside call negated the goal. The Tar Heels were then three opportunities from set pieces near goal after Florida State repeatedly took UNC players down just outside the box, but the Tar Heels failed to make anything happen on any of them, thanks largely to the FSU defensive play.

Florida State had its only opportunity on goal in the first half with just seconds left on the clock when Taylor Hallman had a cross land right at her feet and fired off a shot, but Tarheel goalkeeper Lindsey Harris managed to knock it off target. With Harris’s block, the whistle blew, and the game went into halftime tied at zero.

The Seminoles came into the second half with a little more energy, and a big reason was the return of Deyna Castellanos to the field. With just over a minute off the clock in the second half, Castellanos moved the ball towards goal and fired off a shot, but the low shot was easily scooped up by Harris. Castellanos got another shot off just minutes later, but it sailed high.

UNC generated a play in the middle of the field that was intended for Bridgette Andrzejewski, but Miller came off her line and got to the ball before Andrzejewski. Florida State immediately countered when Castellanos received the ball and ran down the right flank before the passing the ball off to Kaycie Tillman. Tillman’s first touch was off, though, and it slowed down the speed of the play, allowing UNC to catch up and deny the Seminoles another opportunity on goal.

With under 18 minutes left in the match, Alex Kimball received service from the left flank and tried to run onto the bouncing ball, but Miller came off her line and jumped on the ball to deny her any chance. The two collided and FSU wanted a foul called, but none was called. Just minutes later UNC got another opportunity on a play generating off a corner kick, but the shot was easily saved by Miller.

Still scoreless at the end of regulation, the championship match went into overtime. Both teams really cranked up the intensity as they eagerly searched for the golden goal, and it was the first time the game really felt exciting.

FSU dominated both overtime periods in terms of possession and was knocking at UNC’s door the majority of overtime. Their best attempt on goal all day came in the 96th minute when Kaycie Tillman sent a through ball in to Kristen McFarland, who was able to turn and fire a shot off on goal. Lindsey Harris made a diving save to block the shot with her body and prevent the goal. Castellanos eventually ended up with the ball and fired off another shot, but it sailed high and out for a UNC goal kick.

North Carolina had a solid look on goal in the second overtime period when Castellanos was stripped of the ball and the Tarheels got off a shot, but Miller easily made the stop. FSU soon answered as McFarland received the ball inside the box and took a shot, but it was deflected out for a corner kick. With just 24 seconds left FSU took the corner, but Harris took to the air to pick the ball off and send the ACC championship match to a penalty kick shootout for the second year in a row.

The first four players converted their shots to tie the shootout 2-2. However, Cassie Miller saved Abby Elinksy’s shot and Megan Connolly converted hers to give FSU the 3-2 lead. The next two takers both converted their penalties, and it came down to UNC’s Bridgette Andrzejewski in the final round of PKs. Andrzejewski fired left, but her shot hit the crossbar and Florida State emerged victorious once more.

Next up for both teams is the NCAA tournament. The NCAA will officially announce the teams selected to compete in the tournament tomorrow afternoon at 4:30 p.m. EST, with first round of play kicking off on Friday, November 11.