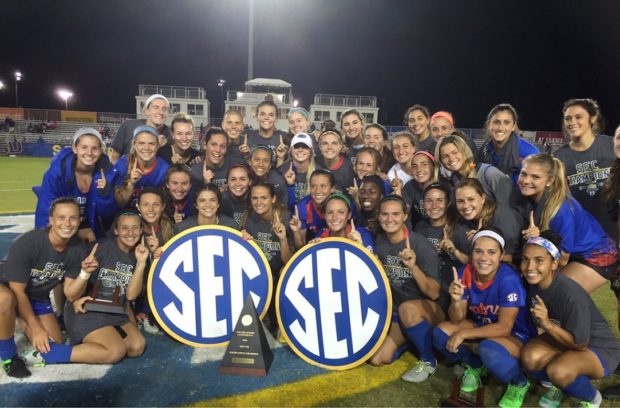 The Florida Gators defeated the Arkansas Razorbacks in overtime to win the SEC tournament final, 2-1. The win is the second consecutive title for the Gators and the 12th in program history.

The last time the two teams met in a SEC championship was in 1996, which the Florida Gators won to clinch their first ever SEC championship title. In comparison, Arkansas has never won an SEC tournament title.

Florida came out from the opening whistle with heavy pressure and a strong attack, with Savannah Jordan taking a number of shots in the first half alone. With just over 15 minutes left in the first half, Jordan received the ball inside the goal box. She had a defender on her but she managed to turn and shoot around the defender and into goal to put Florida on the board. The goal is Jordan’s 80th career goal, and she trails only Abby Wambach for goals scored in both Florida and SEC history.

Arkansas started generating a lot of momentum and maintained possession in their offensive half late in the second half as they tried to find an equalizer. Head coach Colby Hale began implementing his substitution strategy to rest players and put fresh legs onto the field to try to give the Razorbacks an advantage over the Gators, a strategy that worked in the Razorbacks’ semifinal win over Auburn. They also relied heavily on Katie Kienstra’s long flip throw to put the ball in front of the goal, but they were unable to generate any real chances as a result.

With 11 minutes left in the match, the Razorbacks equalized after a bad back pass to Florida goalkeeper Kaylan Marckese nearly saw Arkansas’s Lindsey Mayo get a goal. Marckese’s clearance bounced to Arkansas forward Alexandra Fischer, who moved the ball into space and fired a shot off from distance, catching Marckese off her line and unable to make the save.

Florida had two opportunities to score the game winner in the final minutes of the second half, but both shots were just wide of the far post. Still tied 1-1 at the end of regulation, the championship match went into overtime.

Both teams had a number of chances on goal in the first overtime period, and it looked as though the match was about to go into second overtime. However, with just about a minute left in the first overtime period, Savannah Jordan moved the ball into the box and passed to Meggie Dougherty Howard on the left flank. Dougherty Howard sent a cross to Brooke Sharp, who managed to slip in behind Carter and head the ball into the net for the golden goal, clinching the SEC championship win for the Florida Gators. Sharp’s SEC championship-winning goal was just her second of the season.

The championship win is the second consecutive win for the Gators and the 12th in program history. The win also gives the Gators an automatic bid to the NCAA tournament, the first round of which begins next weekend.