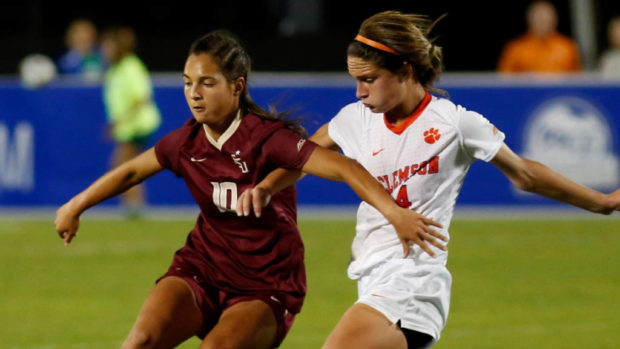 Deyna Castellanos fights for the ball against Clemson in FSU’s ACC semifinal win. (photo courtesy of Mic Smith and the ACC)

The Atlantic Coast Conference (ACC) tournament semifinals saw four top-20 teams go head-to-head in attempts of advancing to the tournament final. In a night marked by upsets in NCAA women’s soccer action, it would be no different in the ACC as #10 North Carolina toppled #6 Notre Dame and #13 Florida State defeated #9 Clemson to advance to the ACC tournament final.

North Carolina defeated the top-seeded Notre Dame, 2-1, in the first ACC conference semifinal Friday night. UNC had defeated Virginia 3-0 in the opening quarterfinal round to advance to the semifinals, while Notre Dame advanced after scoring a late goal against North Carolina State.

The Fighting Irish gave up a number of free kicks dangerously close to goal, and that ended up being detrimental to them in the first half. UNC got on the board after Notre Dame defender Ginny McGowan fouled Maya Worth just outside the box, awarding the Tar Heels a free kick in good position. Annie Kingman took the free kick and nearly scored, but her shot hit the post and rolled back out in front of an open goal. Worth ran up and knocked the deflection in before Notre Dame goalkeeper Kaela Little could clear it.

The score remained the same until late in the second half when Notre Dame finally got on the board with just under 20 minutes left in the game when Kayleigh Olmsted capitalized on a bad play by the Irish. Olmsted intercepted a bad pass back intended for UNC goalkeeper Lindsey Harris, who had come outside of the 18 to receive the pass. Olmsted blew past Harris, who fell while trying to get back into position, and easily sank a shot on a wide open goal.

Notre Dame had a potential game winner in reach when Karin Muya nearly scored the go-ahead goal for Notre Dame from point-blank range, but her shot was just wide left of the mark.

Instead, UNC retook the lead when Bridgette Andrezejewski moved the ball forward before slotting a cross over to Kingman at the top of the box. Kingman sent a low shot off her left foot and past Keala Little to put the Tar Heels up 2-1 with less than five minutes left in the match.

Despite a valiant effort by Notre Dame to find another late-minute goal, they fell short, and UNC advanced to the ACC tournament final for the first time since 2009.

It did not take Florida State long to score the game winner, as Megan Connolly fput FSU on the board just four minutes into the match. The game-winning play originated on a Seminole corner kick, which was sent out to Deyna Castellanos at the top of the 18. Castellanos passed to Kaycie Tillman on the left side of the box, and Tillman sent a cross in front of goal. Malia Berkely headed the ball towards the far post, where Connolly managed to outjump a Clemson player to head the ball in for the lone goal of the match.

Clemson had a number of opportunities to level the score in the first half, but could their finishing was off. Paige Reckert had a solid look on goal about 35 minutes in when the Tigers moved the ball down the left flank before sending a cross to Reckert near the goal box. Reckert took a shot, but it sailed over the crossbar. Their best opportunity on goal in the first half came moments later when Jenna Watson sent in a header from near the penalty spot that sent Seminole goalkeeper Cassie Miller diving to save.

The second half was just as evenly matched, but Clemson came out slightly more dominant as the regular season co-champions fought hard to find an equalizer. Although the Tigers outshot FSU 12-11, they only had three on goal for the night, each of which was stopped by Miller. At the final whistle, Clemson had yet to find a goal, and Florida State walked away the upset.

With the win, the reigning three-time ACC tournament champions Florida State advance to the ACC tournament final for the fourth consecutive year. They will take on UNC on Sunday, November 6 at noon EST. The match will be aired on ESPNU and streamed online at WatchESPN.