Unsurprisingly, Friday saw two close matches in the typically lower scoring Big Ten. Unlike the quarterfinals last week, however, both semi-final games were decided in regulation. Minnesota, the top seed, and host of the tournament advanced to Sunday’s final with a win over Michigan. Rutgers meanwhile defeated two seed Northwestern to earn a spot in the final.

Julianna Gernes scored the game’s first and only goal in the eighth minute of play to lift the Golden Gophers over Michigan.  On the play that would decide the match, forward Josee Stiever’s took a shot near the end line that hit the post. The ball fell to Gernes who was well positioned to knock the ball in for the score. The strike was Gernes’ third in as many games. Minnesota would outshoot the visitors 13-7 in the contest.

The Wolverines best chance of the night came in the 54th minute when a free kick from about 40 yards out taken by Reilly Martin fell to Abby Kastroll. Kastroll’s ensuing shot went over the crossbar. Friday’s contest was only the third time this season the Michigan was held scoreless. Two of those three scoreless matches this season came against the Gophers. Sarah Jackson made four saves in net for the Wolverines while Tara Hobbs had three in her 32nd career shutout for the Golden Gophers. 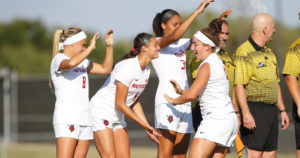 The second Big Ten semifinal was also a one goal affair with junior Colby Ciarrocca providing the lone tally on the evening. Ciarrocca’s goal in the seventh minute of play started with a Madison Tiernan throw in. Tiernan’s throw in was collected by Kenie Wright. Wright then sent a cross into the box. The ball was misplayed by the Northwestern defense which gave Ciarrocca the opportunity to tap the ball past the Wildcats’ Keeper Lauren Clem.

The contest was a defensive battle with just three shots on goal combined in the affair. Northwestern outplayed the Scarlett Knights in the second half, recording 5 shots to Rutgers one but ultimately were unable to level the score.  Nandi Mehta had perhaps the Wildcats best chance of the night in the 59th minute but her shot went just over the crossbar.

Rutgers has now beaten the second and third seeds, Penn State and Northwestern respectively, to reach the Big Ten title game. In order to lift the trophy on Sunday, Rutgers will have to best the tournament’s top seed, a feat they failed to do last year against the Nittany Lions.

DaCosta back with Breakers, Beard via trade from Chicago
UCLA defeats USC 1-0 in Crosstown Showdown