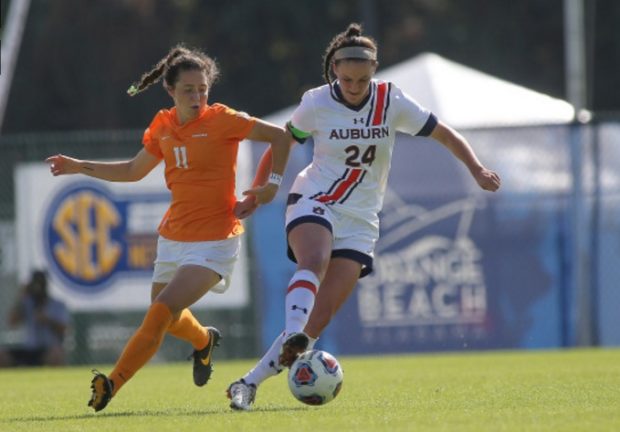 Casier Ramsier controls the ball in Auburn’s 3-1 win over Tennessee in the SEC Tournament quarterfinals. C. Ramsier had a hat trick in the match. (photo courtesy of Auburn University)

After over six hours of Southeastern Conference (SEC) tournament play, four teams advanced to Friday’s semifinal round. Six teams received byes into the quarterfinal round, with Tennessee and Texas A&M having to earn their spot via first round wins on Monday to advance. Here’s a quick recap of all of the SEC quarterfinal action:

In a rematch of their regular season finale, the #13 Auburn Tigers took on the Tennessee Volunteers in the opening game of the SEC quarterfinal round. Just like in that match, Auburn defeated Tennessee 3-1. Auburn, the second seed in the tournament, received a bye to the quarterfinal rounds, whereas Tennessee had to defeat Ole Miss on Monday for their spot. Tennessee was able to maintain pace with Auburn though, and the match was still scoreless at the half.

Coming out from the break, Auburn’s midfielder Casie Ramsier began taking charge of the field and scored the first of her three goals. Freshman Bri Folds provided service to C. Ramsier, who flicked it over goalkeeper Shae Yanez to put Auburn up 1-0 just two minutes into the half. Moments later, C. Ramsier struck again. Kristen Dodson laid a ball off to C. Ramsier, who one-touched the ball into the back of the net. C. Ramsier’s second goal of the match was her 12th game winner and the 35th of her career, moving her up into second in Auburn’s all-time leading scorers list.

Tennessee answered next as Hannah Wilkinson connected with Meghan Flynn in the 56th minute, but it would be Tennessee’s only goal of the match and not enough to dampen the hot streak C. Ramsier was on. Less than 20 minutes later, Brooke Ramsier found her sister at the top of the box, and C. Ramsier blasted a shot into the side netting for the hat trick.

With the 3-1 result, Tennessee was eliminated and Auburn advance to Friday’s semifinal round.

In the second quarterfinal match of the day, #18 Arkansas scored a late second-half goal to defeat Vanderbilt, 1-0. Both teams received first-round byes and came into the game on equal footing. That remained the case for the first half, but momentum gradually began swinging in Arkansas’s favor in the second half, thanks to some very strategic coaching by head coach Colby Hale.

Hale’s substitution strategy resembled that of indoor soccer as there seemed to be a constant rotation of Razorback players moving on and off the field. In the second half alone, Hale made approximately 20 substitutions in attempts of keeping his players’ legs as fresh as possible. Hale’s strategy paid off; Arkansas maintained a high tempo of play until the final whistle while the Commodores looked exhausted in comparison.

That high tempo on offense led to the only goal of the match late in the second half. Alexandra Fisher sent a cross in from the left corner of the box to Claire Kelley, who took to the air and headed the ball past Vanderbilt’s goalkeeper Kaitlyn Fahrner. The goal was Kelley’s eighth season and enough to give Arkansas the win.

With the win, Arkansas advances to the semifinal round against Auburn. The last time the two teams met was on October 14 in Auburn. In an exciting, high-scoring match, the home Tigers managed to squeak out a 3-2 win.

The SEC regular season champions avoided an upset to stay alive in the SEC tournament and undefeated for the season. The #3 South Carolina Gamecocks, the top seed in this tournament, overcame a one-goal deficit to defeat Texas A&M 2-1.

Texas A&M defeated Alabama in two overtime periods on Monday night, and the toll of playing just two days ago was apparent in the Aggies’ sluggish start. The Aggies eventually managed to crank up the energy and scored first in the match. Kendall Ritchie played the ball in behind defender Kailey Mattison as Emily Bates made a run towards goal. Bates got to the ball and fired it past netminder Mikayla Krzeczowski to put South Carolina down for just the second time this season.

Kaleigh Kurtz, the SEC Defender of the Year, sent a strong header to Savannah McCaskill, the SEC Offensive Player of the Year, who caught the ball on a bounce. Aggie goalkeeper Danielle Rice came off her line to try to stop McCaskill, but McCaskill chipped the ball over her and the ball bounced into the goal for the equalizer. McCaskill gave the Gamecocks the lead with 25 minutes left in the match after Krzeczowski’s goal kick sailed over the field and McCaskill was able to run onto it. McCaskill put the shot away for the game winner.

South Carolina had a number of other looks on goal in the second half, but failed to finish any of them. They decided to play it safe and run down the clock, with McCaskill sitting on the ball in corner to burn as much time as possible. The strategy, although frustrating for A&M, was effective, and South Carolina remain undefeated for the season.

Missouri took an early lead in just the third minute of the match when Sarah Luebbert connected with Allie Hess, who then played the ball to Jessica Johnson. Florida goalkeeper Kaylan Marckese came off her line, allowing Johnson to slip behind her and fire off a shot to the far post. Johnson’s goal was the first goal Florida has given up in 273 minutes, but it would not be the last one Florida gave up to the Tigers.

Florida got on the board when Sarah Troccolli played a through ball to Melanie Monteagudo who went 1v1 with Missouri goalkeeper Kelsey Dossey before firing off a shot to Dossey’s left and into the goal. The Gators would then take the lead when a corner kick was headed around the box a number of times before finally falling to Troccolli’s feet, and Troccolli’s volley went in for Florida’s first goal of the night.

Monteagudo scored again for Florida less than two minutes into the second half when she was played the ball, paused for a second and then made a run into space along the right flank. She had Missouri defenders on either side of her but broke into space and took a shot from the right edge of the box to increase Florida’s lead to 3-1.

Missouri began to put extreme pressure on Florida with about 30 minutes left, and it paid off as the Tigers scored two goals in approximately two minutes. Melanie Donaldson scored the first of the two after she received the ball in space, took a touch, turned and shot the ball past Marckese. Just moments later Johnson scored a brace after Erin Webb played a ball out to her in space, and Johnson moved the ball to just inside the box near the end line and fired off a shot that blew past Marckese and tied the match up, 3-3.

Missouri was awarded a penalty kick after Rachelle Smith took Luebbert down in the box. Donaldson lined up for the Tigers, but her shot went right to Marckese for the easy save. The game remained tied at the end of regulation, and the game went into overtime.

The game remained tied throughout two overtime periods and was sent to a penalty kick shootout. It took eight rounds of kicks, but Marckese finally managed to make a save and Monteagudo made her kick to give Florida the win. Florid now advances to the semifinals, where they will take on the top-seeded South Carolina.

The SEC Tournament semifinals will be played on Friday, November 4.  South Carolina and Florida start off the semifinal action at 3:30 p.m. CST with Auburn and Arkansas following at 6 p.m. CST.