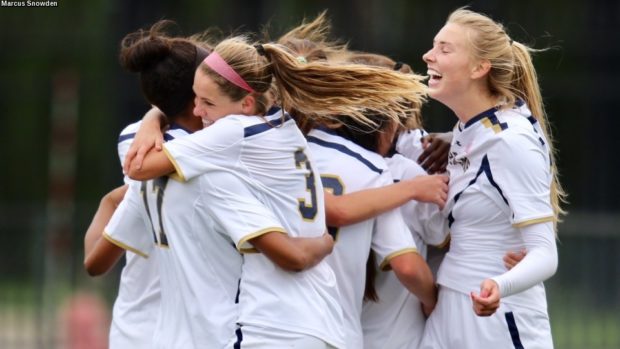 The Atlantic Coast Conference (ACC) kicked off its women’s soccer tournament on Sunday with four single-elimination quarterfinal matches played simultaneously. With six of the eight teams competing in the tournament currently ranked in the NSCAA’s top 25, the tournament featured some of the best teams and players in the nation. With such high-caliber competition, it was not surprising that the ACC tournament first round was highlighted by upsets, last-minute goals and penalty kick shootouts.

The ACC’s no. 1 seed Notre Dame struggled for most of the match against the no. 8 seed North Caroline State in this quarterfinal match up, but a late goal lifted the Fighting Irish over NC State. The Wolfpack outshot Notre Dame 11-6, but Notre Dame goalkeeper Kaela Little had six big saves to earn the clean sheet.

The lone goal of the match was scored in the 88th minute after Notre Dame amped up the pressure in attempts of winning in regulation time. Defender Natalie Ward received the ball along the right flank, outmaneuvered her defender and sent a cross into traffic in front of the goal. Karen Muya initially headed the ball, but her shot came down in front of Kaitlin Klawunder, who half-volleyed the ball into the side of the goal. There was not enough time left in the match for NC State to answer, and the Fighting Irish advanced to the semifinals.

The last time Clemson and Miami met was on October 14, a home match for Clemson that ended up being a 1-0 win for the Tigers. Just like in that match, Clemson struck first, but this time it was Catrina Atanda who put a goal away in just the 10th minute. However, the Hurricanes tied it up in the 26th minute when Shannon McCarthy’s free kick bounced in front of Gianna Dal Pozzo and Dal Pozzo one-touched the ball into the back of the net.

Clemson led Miami in everything but saves, outshooting the Hurricanes 15-7 during regulation time, but neither team could finish any of their opportunities in the second half, and the game was sent into overtime. Still tied 1-1 at the end of two overtime periods, the game went to a penalty kick shootout to decide the winner. Clemson goalkeeper Kailen Sheridan, who had just converted a penalty kick for the Tigers, was able to save Kristine Fisher’s kick ended up being the difference maker, and Clemson won the shootout 5-4. 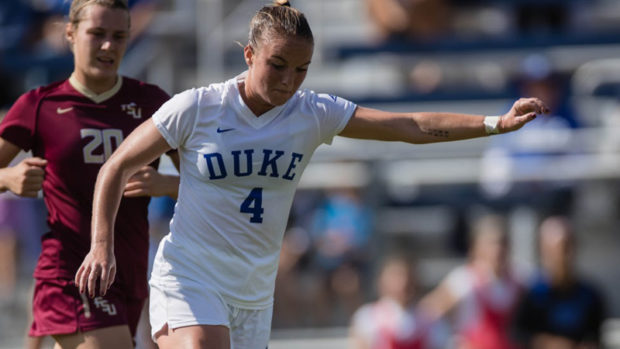 In arguably the most exciting match of the day, #8 Florida State edged out #6 Duke to advance to the ACC semifinals after two overtime periods and a penalty kick shootout.

Duke scored in the first half on a play originating off a throw-in when, after some quick passing by the Blue Devils, Chelsea Burns sent a long pass to Ashton Miller in space. Miller took a touch or two before blasting a shot from about 30 yards out that blew past Seminole keeper Cassie Miller and into the back of the net. Duke take a 1-0 lead into halftime, but Deyna Castellanos, in her first game back with FSU after playing with the Venezuelan Under-17 team in the U-17 Women’s World Cup, tied up the game just over two minutes into the second half. Duke tried to head a cross out of the box, but the ball went right to Castellanos, who one-timed a rocket into the upper right corner to put Florida State on the board.

Neither team would score for the remainder of regulation time or in either overtime period, and the match would go to penalty kicks. FSU won the shootout 3-2 to stay alive in ACC post-season play.

The #16 North Carolina Tar Heels upset #7 Virginia today in one of only two ACC quarterfinals to not go into overtime. The fourth-seeded Tar Heels outscored the Cavaliers 3-0 to easily move on to the semifinals of the conference tournament.

Madison Schultz first put UNC on the board when she was able to steal the ball from UVA goalkeeper Morgan Stearns inside the box, moved the ball towards the center of the goal and fired past Stearns. The goal was only Schultz’s second of the season. Sarah Ashley Firstenberg then increased the Tar Heels’ lead early in the second half when she made a run down the center of the field and split Stearns and a defender to put a ball inside the far post. Julia Ashley scored the final goal of the match, heading in a corner kick taken by Dorian Bailey.

With Sunday’s results, the ACC tournament semifinals are set for Friday, November 4. Notre Dame will take on UNC at 5:30 p.m. EST and Florida State will take on Clemson at 8 p.m. EST. Both matches will be aired on ACC Network Extra and streamed on WatchESPN.com and the WatchESPN app.