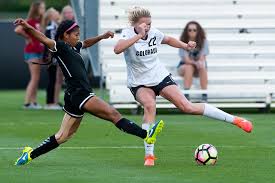 Taylor Korniek, right, gave Colorado the win with only two seconds to spare

Time sure does fly. For most conferences across the country, last week was the penultimate weekend of the regular season. Here’s a look at some of the major headlines as we move closer to the NCAA tournament.

California lost its first match at home this season when Colorado’s Taylor Zuniga scored off a free kick with just two seconds left in overtime. Zuniga’s tally gave the Buffs the 2-3 victory. The Bears for their part fought valiantly to get back in the game after an early second half brace by Danica Evans gave Colorado a 2-0 lead.

The Bears scored two goals in the last three minutes of regulation to force overtime. Maggie Bell got California on the board in the 88th minute and Ifeoma Onumonu scored her tenth of the season in the 89th minute. Jalen Tompkins made nine stops in net for Colorado while Emily Boyd made two for the Bears.

The Buffs have won ten of their last 11 but the last stretch of the PAC-12 conference season will surely test them as they face both Southern California and UCLA.

Kaycie Tillman broke the 0-0 deadlock in the 97th minute to give Florida State an important win in ACC play.  Tillman’s goal was just the Seminoles’ second shot on target in the contest.  For the Blue Devils, Thursday’s loss was the team’s first in the conference play.

Duke dominated for significant portions of the match generating 17 shots to Florida State’s 5 in the match. In the 85th minute of the match, Duke had a golden opportunity to take the lead. The referee called for a penalty kick after Mia Gyau was taken down in the box but senior Christina Gibbons failed to convert the spot kick. To make matters worse for Duke, after Seminoles’ keeper Cassie Miller saved the penalty kick, Gibbons got the rebound and failed to score on that attempt as well. Miller’s efforts in Thursday’s match helped earn her ACC Defensive Player of the Week honors.

A strong first half by the Blue Demons propelled them to an impressive 4-1 victory over Georgetown and at least a share of the Big East regular season title. Sunday’s loss was only the second for the Hoyas all season. The loss may have significant implications for the Hoyas chance at a national seed. The Hoyas are now winless against DePaul in their last six meetings.

The Blue Demons scored 4 goals on 4 shots in the opening half. Alexa Ben got the visitors off to a terrific start with a goal 38 seconds into the match on her way to a brace on the afternoon. Franny Cerny scored in the 12th minute to give DePaul a 2-0 edge. Georgetown got one back around the half hour mark through Meaghan Nally. DePaul quickly answered with goals from Ben and Abby Reed before the half.

The Aggies got a much-needed win against Auburn on Sunday. The victory gave Texas A&M their first winning streak since SEC conference play began. Brooke Piper opened scoring in the 54th minute when she headed in a free kick.  Seconds later, Auburn answered when Brooke Ramsier scored directly off of a free kick.

The score would remain tied for the next half an hour until Aggie Emily Bates was taken down in the box by Karlie Gutsche. Haley Pounds converted the ensuing penalty kick to give the Aggies the 2-1 victory. Auburn outshot Texas A&M 25-to-9 on the night. Danielle Rice made six saves on the night for the Aggies.

Sydney O’Donnell scored with 2 seconds left in the game to take the 16-0-1 Gamecocks to extra time. Before O’Donnell last second effort, South Carolina held a 1-0 lead for 89 minutes as Paige Bendell headed in a corner in the first minute of play to her side the lead.  The Gamecocks, however, responded well to conceding late. Daija Griffin scored the golden goal in the 97th minute, South Carolina’s third shot in overtime. Vanderbilt didn’t manage a single look after regulation.

The Gamecocks are now unbeaten in their last 15 contests. The lone blemish on their record is a 1-1 tie to Oklahoma in the first game of the season. South Carolina will wrap up the SEC regular season this Thursday against Ole Miss.