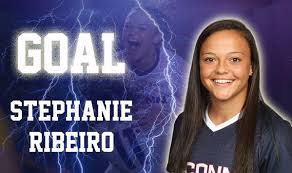 Stephanie Ribeiro had one of the best weekends of her career leading the Huskies to a pair of victories. (photo: UCONN)

Unless you were a UConn Husky, you probably had trouble scoring last weekend. Here’s a look at some of the major storylines from Week 9 before this weekend’s action commences.

Last week, the Huskies made quite a statement beating two conference foes, South Florida and Central Florida by a total of 6-1.  Stephanie Ribeiro was involved in each of the scores for UConn on the week tallying 3 goals and 3 assists in the two contests. She currently leads the nation in total points with 41.

On Thursday against the Knights, Toriana Patterson opened up scored just before the half. Rachel Hill and  Ribeiro each added one in the second half.  In the Huskies seventh shutout of the season, Emily Armstrong recorded 9 saves.

On Sunday, UConn beat South Florida for the first time in four years. Ribeiro tallied twice and Hill chipped in a third to give the Huskies a 3-0 by the 60 minute mark. The win combined with a loss by Southern Methodist gave the Huskies sole possession of first place in the American Athletic Conference.  Gudrun Sigurdardottir scored the only goal against UConn on the weekend in the 72nd minute.

The Gamecocks continued their winning ways with a 1-0 win over the Gators last Thursday.  For the third time in the last four contests between the two sides, the game required overtime.

The game winner came in the 103rd minute after Florida was called for a foul in the box against Simone Wark. Chelsea Drennan converted the ensuing penalty kick.   The Gamecocks are a perfect 8-0 in conference play while Florida fell to 5-3.

The game featured two of the nation’s top scoring threats  and certainly the top two with the name Savannah in Savannah McCaskill and Savannah Jordan, neither of whom scored in the contest. McCaskill accounted for more than half of the Gamecocks shots (8), while Jordan finished with three for the Gators.

In a top ten showdown, the Blue Devils were victorious thanks to a 63rd-minute penalty kick from senior Christina Gibbons.  The spot kick was earned after Betsy Brandon took Chelsea Burns down in the box.

Duke, last year’s College Cup runner-ups, are currently atop the ACC standings at 6-0-1 despite several injuries that have befallen the Blue Devils. The team is without the services of Rebecca Quinn, who won a Bronze medal with Canada in August, and Kayla McCoy. Recently, Taylor Racioppi has been out of commission with a leg injury. With just a few games left in the regular season, it will be interesting to see if Duke can continue to grind out wins especially with games against Florida State and Clemson remaining.

In another ACC clash, the Tar Heels once again recorded another first and not in a good way. For the first time in program history, North Carolina lost to the Fighting Irish in South Bend. Freshman Jennifer Westendorf provided the game’s only goal in the 57th minute with a powerful left-footed strike off of a free kick. It was Westendorf’s team-leading 6th strike of the season.

Tar Heels keeper Lindsay Harris recorded eight saves in the match. Her counterpart for Notre Dame, Kaela Little recorded five. In the second half,  which ended up deciding the match, the Irish outshot the Tar Heels 12-6.

Stellar Week for the Mountaineers

Super sub Hannah Abraham scored  off the bench in the 82nd minute to give the Mountaineers the win. It was her fourth goal of the season. Abraham’s winner was highlight reel stuff as she was falling away from goal as she released the shot.  Take a look:

Meanwhile, since Big 12 conference play started six games ago, The Mountaineers have not allowed a goal. In sum, they have posted nine shutouts on the season.

Related TopicsFeaturedRoad to the College Cup