Ashlyn Harris is fighting for the USWNT’s No. 1 goalkeeper spot. (Photo Copyright Erica McCalley for The Equalizer)

Ashlyn Harris is ready. She has been ready for some time.

Harris, the 2016 NWSL Goalkeeper of the Year, is fit, healthy and confident as she takes her shot at the starting goalkeeper job with the U.S. women’s national team, the best shot she’s had in her four years with the senior team.

Harris of the Orlando Pride and Alyssa Naeher of the Chicago Red Stars are the favorites to emerge in the spot owned by Hope Solo for the past decade. Solo was suspended and had her contract terminated in August after calling Sweden “a bunch of cowards” following the Swedes’ penalty-kick shootout triumph over the Americans in the quarterfinals of the Olympics.

“I feel really confident,” Harris told The Equalizer. “I had a very good season with my club. I feel that both myself and Alyssa Naeher are world-class goalkeepers. I have a really good opportunity ahead of me.”

A rising star after standout performances with the Under-19 national team in 2002 and 2004, Harris played every minute of the 2002 U-19 Women’s World Championship and helped the USA win the title. In 2004, she captained the team that finished third in the event. But she suffered a string of injuries in college at the University of North Carolina – pins in her thumb in 2005, right ACL tear later that year, left ACL in 2006, hip injury in 2007. Her debut with the senior national team was delayed until 2009.

[PREVIEW: New-look USWNT set for pair of friendlies against Switzerland]

By that time, Solo owned the goalkeeper job. Harris stayed busy, though, playing in the USL W-League, in WPS, in Germany, in Sweden and finally in the NWSL, first with Washington and now Orlando, where she kept the ball out of her net with both simple saves and acrobatic, highlight-quality stops. She was frequently called upon as Orlando’s defensive struggles persisted. 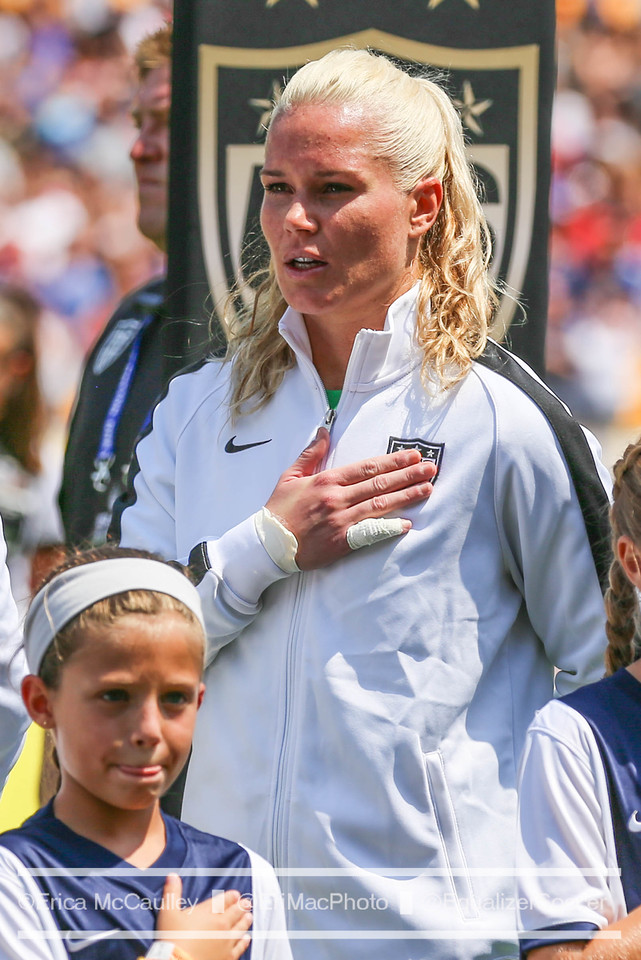 “I’m in a really good place now,” says Harris. “I wake up every day and I have a choice to get better and to choose my attitude and work my tail off. And that’s what I do. I don’t really think about the pressures like what if she starts and I don’t. That kind of stuff is out of my control. I just work really hard every single day.”

With three years between the 2016 Olympics and the 2019 World Cup, the national team is entering a transition period. The biggest transition will be in goal, a position where experience in a key ingredient to success. Solo played 202 times for the U.S., 185 more than Naeher and Harris combined.

“Alyssa and I might just have a handful of caps, but year after year in the league we are performing, and every day in training we are performing,” says Harris. “I have the utmost respect for Alyssa. I think she is an incredible athlete and human being. I love playing alongside her.”

Head coach Jill Ellis, however, is not overly concerned with caps. Her priority is to find players who can help the U.S. win.

“The message for the players currently with us is that everything moving forward becomes about performance,” Ellis said when releasing the 24-player roster for October friendlies. “It’s not about how many caps you have or what you’ve done in the past, but what are you doing in this moment and what are you prepared to do for the future. That’s going to help us. It’s going to make for a healthy competitive environment and force players outside of their comfort levels, and these players are at their best when they’re pushed.”

For the 2016 Olympics, Ellis chose the 28-year-old Naeher for the backup goalkeeper slot behind Solo on the 18-player roster. Harris, who turns 31 on Wednesday, was the alternate. In preparation for the two matches this week against Switzerland, Ellis invited 11 uncapped players to training camp. Three of the 24 players in camp are goalkeepers – Harris, Naeher and 21-year-old Jane Campbell out of Stanford.

“Right now, it’s any person’s spot to win,” she adds. “I know they will be pulling up a lot of younger goalkeepers because it’s necessary and we need it. Alyssa and I are not young anymore. I think having competition is great. I want to have a young goalkeeper that is just rocking it and challenging us.”

Harris and Naeher spilt two September friendlies. Harris fought boredom in a 9-0 win over Thailand on Sept. 15 in Columbus, and Naeher was in goal for the 3-1 win over The Netherlands three days later.

National team goalkeeper coach Graeme Abel, Harris says, has been taking the perfect approach to training her and Naeher by recognizing their styles.

“I think the beauty of it is that Alyssa and I are two completely different goalkeepers,” she says. “Who we play and what is needed could determine who plays in goal. It’s not a bad thing to have. That’s what I love most about Graeme. He doesn’t try to make us all the same. He really embraces all of our individual characteristics. He tweaks them and makes them better.

“I’m really excited for the future. No matter who is playing, we are going to be good. Jill actually said ‘We have been marinating steaks for a while.’”