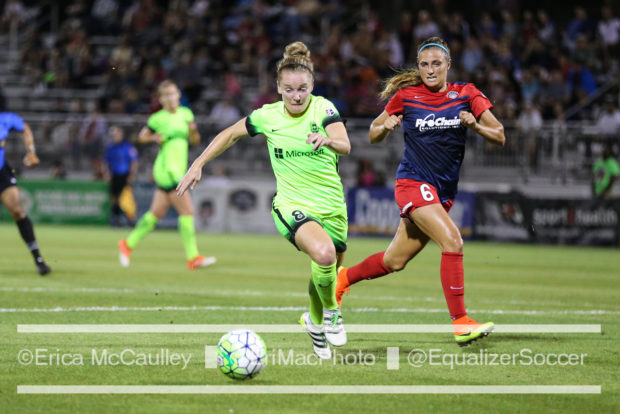 Kim Little, shown here against Shelina Zadrosky, was one of the key cogs in the Reign’s quick turnaround in 2014. (photo copyright EriMac Photo for The Equalizer)

Seattle Reign FC announced on Monday the transfer of Kim Little to Arsenal Ladies FC, ending the Scottish midfielder’s stat in Seattle after three seasons. The 26-year old will begin her second stint at the FAWSL club in January.

“Kim was presented with an unbelievable offer by Arsenal, so given our respect and appreciation for Kim, we felt it was right to let her return home to pursue the opportunity,” Reign FC general manager and head coach Laura Harvey said in a club release. “She is an extraordinary person and player, so while we hate to lose her, we are really happy for her and support her decision.”

Originally a discovery claim by the Washington Spirit, Little’s rights were traded to Seattle following the 2013 season on a complicated trade that landed Christine Nairn and Jodie Taylor in Washington. Little, who played for Harvey at Arsenal, signed with the club and immediately took NWSL by storm. She combined with Jessica Fishlock and Keelin Winters to form the best midfield in NWSL and keyed a turnaround that lifted the Reign from the nether regions of the table to the league’s dominant club. The 2014 Reign played their first 16 matches without losing and finished the 24-match campaign with only two blemishes. Little scored a league record 16 goals and was named Most Valuable Player.

The Reign repeated as NWSL Shield winners in 2015 with Little being voted onto the Best XI for the second year running. The Reign though, lost to FC Kansas City in the NWSL Championship after both Shield seasons.

“Kim took a risk coming to Seattle before the 2014 season,” Harvey said. “I knew that she could help us achieve what we wanted, and I think that the trust created between the two of us is something that will remain forever. Our door will always be open for Kim in any capacity, whether it be as a player or whatever she chooses to do when her playing career is over.”

Little’s final season in Seattle was something of a disappointment. Despite being named to the league’s Second XI, her effectiveness tailed off and the Reign struggled to find consistency, ultimately missing the playoffs for the first time since 2013. Harvey will have her work cut out for her putting the 2017 club together. Prior to the end of the season Winters also announced she was leaving, in her case for retirement, meaning two-third of the best midfield triangle NWSL has ever seen will be gone.

“Being involved in a great club with great players and great people, I had the best few years here,” Little said. “I’ll miss playing with the girls and being with the team. It’s been great to be involved with such an amazing organization.”

In Little’s final match with the Reign she scored the equalizer in an eventual 3-2 win over the Houston Dash. The win marked the first time any NWSL club had won from two goals down in a 90-minute match. A year earlier, on the same pitch, Little recorded her only hat trick, capped off by a highlight reel goal that left several Dash defenders in her wake.