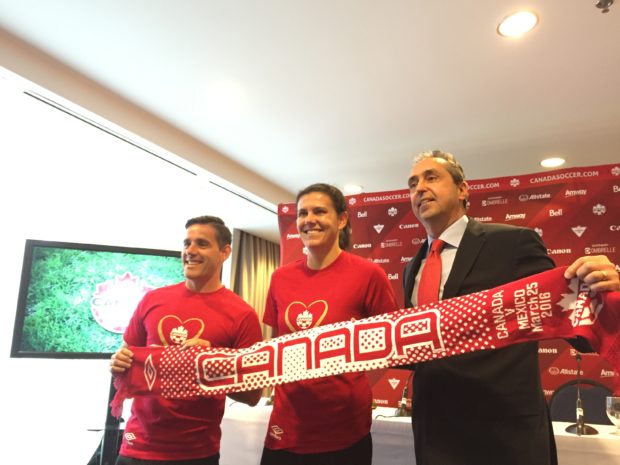 Christine Sinclair, flanked by John Herdman (l) and Peter Montopoli, says she would like a major world trophy for Canada before she retired. (photo copyright Harjeet Johal for The Equalizer)

VANCOUVER, B.C – Christine Sinclair is not retiring after all. Despite a flurry of activity on social media and fan speculation that Canada’s greatest soccer athlete would be announcing her retirement at a press conference Friday, she is not hanging up her boots anytime soon. You can see Canada’s all-time leading scorer in action on Saturday, February 4, when Canada hosts Mexico at BC Place. This will be the first home match for Canada in Vancouver since hosting the 2015 World Cup.

Sinclair first learned of the premature retirement talk when asked by her family. She quickly assured them that this was not the case. The 33 year-old striker took a humorous approach with her opening statement this morning.

“So I’ve been reading online that this is my retirement announcement, John’s not getting rid of me yet.”

The Burnaby, B.C. native, and her teammates were a big surprise at the 2016 Rio Olympic games as they topped their group and went on to knock off the hosts (Brazil) in a bronze medal match. Canada’s Olympic success helped them jump to fourth in the FIFA world rankings. Sinclair would like to see Canada take an even bigger jump to the number one spot before she calls it quits.

“Coming out of the Olympics, I think that was the biggest surprise,” said Sinclair. “To move that far up in the world rankings, obviously we knew we were going to improve, but to improve six spots is pretty unbelievable, pretty unheard off. The success only makes you want it more, it’d be a nice fitting way to end my career as number one. That would be pretty sweet.”

In order to climb to that coveted number one FIFA world ranking, Canada will need to win a World Cup or Olympic gold. It’s a long way off until the 2019 World Cup in France and the 2020 Olympic games in Tokyo, Japan, but Sinclair is already focused on winning a major tournament.

“Right now I’ll take the World Cup, because it’s first,” said Sinclair. “Once you’re in the four, five, top six teams, anyone can beat anyone. We’re tired of finishing third, the goal is to win them.”

Taking home the World Cup trophy or winning Olympic gold likely means a showdown with the United States and a victory for Canada. The biggest nemeses for Canada has been the U.S., they are Canada’s main rival and an opponent that brings out the best in the red and white, but not victories. A sleepless John Herdman has been dreaming about the day Canada beats the U.S.

“I know what I’m committed to and what I’m focused on, it’s taking this team to number one and that means beating the U.S. – that’s something that I’ve been dreaming about for a while, and knocking them of their number on perch. Which means you’re going to have to win a World Cup.”

The U.S. is a team that everyone wants to beat, not just Canada. It took Sweden penalty kicks to eliminate the U.S. from the 2016 Rio Olympics, but they proved that playing a defensive tactical match can get the job done. Canada currently doesn’t have a fixture scheduled against Jill Ellis’s team, but they do have a fixation on beating the United States. That could come in 2019 or 2020 when Herdman, Sinclair, and others are in the twilight days with Canada Soccer.

“Someone’s got to say it,” boasted Herdman. “I don’t mind putting my neck on the line. My contracts up in 2020, so this is my last kick at it. It’s gold or bust for me and I’m sure it will be for Christine as well. She’ll be ending her career around that time and some of these other senior players.”

While it’s a mainly one-sided rivalry the respect level is certainly there for players on both sides of the border. Sinclair admires the approach the U.S. takes in every match. Yes, some opponents end up getting battered with a lopsided score-line, but the approach is the same each and every game and win. Sinclair would like to see this mentality adopted by Canada.

“It’s just consistency in every international game we play,” said Sinclair. “The one thing I respect about the Americans, it doesn’t matter who they are playing. Whether it’s Canada, Germany, Venezuela, every game is of the utmost importance. There out to win absolutely every game they play. I think that’s a mentality that we have to adapt.”

If Canada is to reach the lofty goals they have set and take home top prize in a tournament, they can start by dominating Mexico in February. Mexico is a team in flux, disarray, and ripe for a thrashing. Currently without a coach since the departure of Leonardo Cuellar, Mexico has no direction. Canada should be in top form as they celebrate their 2016 Rio Olympic bronze medal.