Ellis spoke about the decision to tell Whitney Engen that she isn’t part of her future plans, if she’s thought about bringing back Hope Solo in the future, and the bevy of young players coming into the mix ahead of the 2019 World Cup. Eleven uncapped players will join training camp in the coming days as Ellis evaluates her options.

Below is what Ellis had to say:

That’s private. I haven’t had further conversations, so no.

What can you say about that decision with Whitney? She’s 28; she’ll be 31 at the next World Cup. People think that’s a pretty good age for a center back.

Do you see any chance that Hope Solo makes her way back into this team?

Looking locally to Houston, two Texas A&M players – Merritt Mathias and Shea Groom – were called in. What was behind that decision? 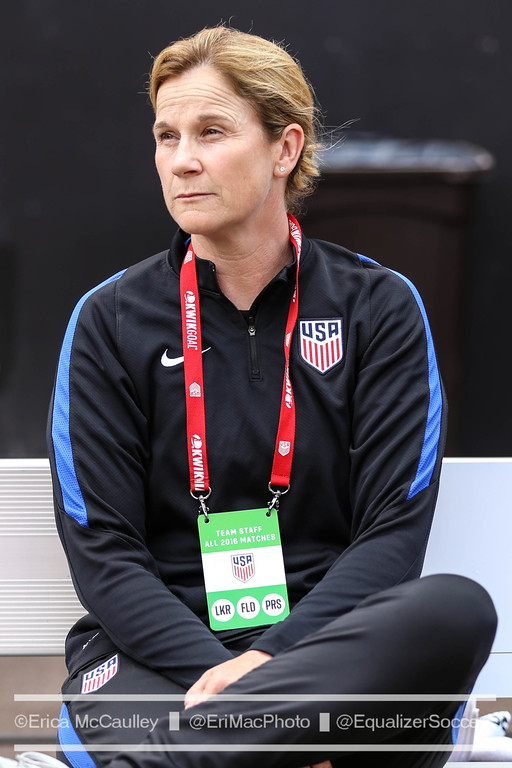 Jill Ellis brought in 11 uncapped players to look at in the next USWNT training camp. (Photo Copyright Erica McCaulley for The Equalizer)

All the players, they’ve done well in the league. Merritt’s obviously playing a slightly different position. For these players that we’re bringing in, they’ve shown things and qualities that I want to bring in. Shea’s obviously had a tough year in terms of the team and the results, but I like her tenacity; I like what she can do. She’s good in the air for her size and I think I want to – the bulk of the players that we brought in are wide attacking players or outside backs. So I think Shea can play central or wide. Her versatility is very good. Merritt, I’ve seen her adapt and adjust to the outside back position, and I think, again, it’s not just rewarding players that have done well, but really wanting to evaluate them in our environment. It’s one thing looking at them in the league and then bringing them in, it’s another thing.

You spoke about this philosophy of a youth movement. At this point it has taken hold quicker than expected. Do you see it that way?

No. You’re talking about the next world event. Now is the time. Every team, every national team is going through a cycle. Japan, why they didn’t qualify for the Olympics, were a slightly older team. And so it’s incumbent on us that we not only explore the talent, but also refresh and have a look at players. So I think it’s always been kind of in my plan in terms of when I took the job, this post- — you go into these two world events and you want to make sure that you have a balance of experience with also one eye on the future. We’ve done that. Now, very much, the eye is on the future and making sure that we have players that we believe can – it’s not just about where they are now. Even with these younger players coming in, again, I’ve got to sort of say, ‘Where can they end up?’ That’s the important thing. They’re going to come in, they’re going to be nervous they’re going to be raw, but at some point I have to see if they are in the hunt.

Are there other players that you want to evaluate that aren’t in this camp? Is the same level of experimentation going to go on in November?

Yeah, I get eight positions in terms of professional players. College players, I can bring in as many as I want. But, yes, there are still other players that I’ve come out of the league season with and I’ve said that these are players that are interesting. I think I just want to get in this first camp. I think I’ve targeted positions in terms of where we can add depth, and again, I don’t put the cart before the horse in terms of what do they do in our environment. It is very, very different and I think it’s going to be exciting to see where these players are.

The U-17s had another stumble at the World Cup. Do you have a reaction to that?

Spokesman: She’ll address that at another time. We’re just going to stay focused today on this game and the roster…

Ellis: They don’t want me to talk about that.

The squad is made up of a number of players who have made their name in this league as opposed to players who were established before the league actually started. What does that say?

Well, that’s exactly why it was created, to serve that purpose and give our players a platform post-college to play. And, potentially, I think this is a realistic conversation we should be having, is some players might not choose to go to college. And now we have this opportunity and again, that’s a sign of where we’re going with our sport and the league. While I think there have obviously been some different teams this year, because some teams have been impacted with injuries and such, I think overall, I thought the game last week was one of the most exciting games I’ve seen. So I think that’s what’s important, because we want to build a fan base, is the quality. So, yeah, I’m pleased. I think it’s serving its purpose, it’s only going to get better and [I’m] excited. I think the players we brought in have done well. I’ve talked to every coach, I’ve done my due diligence. I think it’s important to see where they are, because they see them in the training environment, I do not. So I think the group we brought in is going to be fun to work with.

You mentioned limitations on players you can bring in. Is that something you’d like to see eased up on future contracts?

I don’t discuss any of that in terms of me getting involved in it. I’m told these are my parameters; this is what I operate in. Maximum flexibility obviously benefits any coach.

Kealia Ohai hadn’t done as much in her first two and a half years in the league. Was she on the radar before the last half of the season? What did you see in her?

Yeah, a long time ago, when I first took over, Kealia came in. We had like a Under-23 combined with the women’s [senior] team, so I saw her in there. And she didn’t perform very well. So I had an early look at her and I think the message was, ‘you’ve got to stand out in this environment.’ That was the message for Sam Mewis. I saw her at the beginning of my tenure. I saw her and I said, ‘Sam, you need a year in the league to mature and see where you’re at.’ So, with Kealia, yeah, I think she has completely benefited from having the league, from having these opportunities to go against good players and prove her worth. So, she’s very deserving of a look.