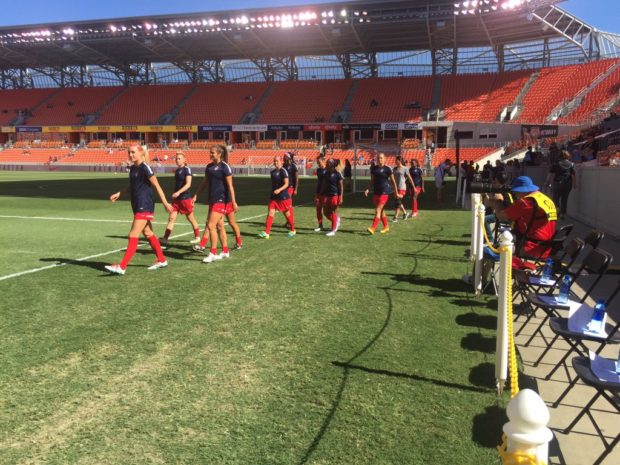 The Washington Spirit walk out for warmups ahead of the NWSL Championship. Their walk back was cloaked in heartache (photo copyright Patti Giobetti for The Equalizer)

The Washington Spirit were 30 seconds away from winning their first NWSL championship Sunday night. Up by one goal, with stoppage time ticking away, the trophy was within their grasp. The stories were written, the tweets were ready. Everyone thought it was over. Everyone, that is, but the Western New York Flash. They had time for one last play, and if anyone could pull it off, it was this team. And they did. But there were 123 minutes of soccer before that, and every single one contributed to the end of the Spirit’s 2016 dream.

The Spirit had their chances

Washington hasn’t been a high scoring team all year, only scoring more than two goals three times this season, and their inability to find that insurance goal may have cost them the championship. Crystal Dunn didn’t take long to get the scoring started, and she didn’t take long into extra time to put the Spirit ahead again, but what about the long minutes in between? Dunn had multiple opportunities to secure a hat trick. Christine Nairn had a wonderful chance for a one touch shot from distance in the first half, the type of goal that is her bread and butter, but went for a pass instead. Ali Krieger had a breakaway moment during the first half of extra time but sent it sailing wide of near post instead of trying for far post. And the less said about the 11 offside calls, the better. The point is, the Spirit were the better team for most of the 124 minutes, but they couldn’t put the game away.

The Flash goalkeeper started off living dangerously, and Dunn made her pay for it. During the second half, however, D’Angelo kept her team in the game with several outstanding diving saves. Then, of course, the game arrived at penalty kicks. Normally a goalkeeper is expected to save one out of the five. Save just one, and she’s done her job. D’Angelo saved three. None of the three were well taken, but that doesn’t erase the fact that D’Angelo did her job during the game and then surpassed it during the shootout. Some may have disagreed with her MVP award, but her teammates likely did not.

{MORE: USWNT to face Romania in final two matches of 2016}

Seven times this season, the Flash came from behind to win or draw, including a stoppage time equalizer against the Dash at BBVA Compass Stadium. Naturally, it was a ball from Jess McDonald to Lynn Williams. They’ve been called the Comeback Queens more than once, and they proved it yet again. This is not to say the Spirit gave up, for it’s far from that. It’s simply that the Flash forced their opportunities until they found a moment where a combination of poor marking and a dicey goalkeeping choice gave them their chance. And no matter how much time was left on the referee’s watch, that was all they needed.

LA Galaxy, Earthquakes added to USSF Girls’ Academy
The Lowdown: How culture change led Flash to the top of NWSL