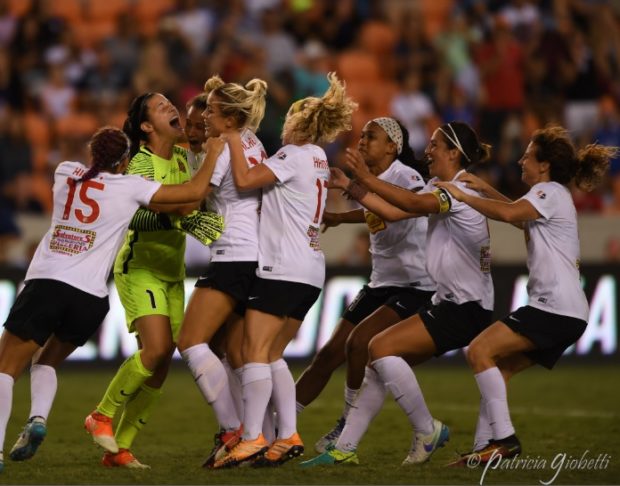 After an incredible season in which few people would have predicted them finishing at the top of the table, the Western New York Flash defeated the Washington Spirit in penalty kicks to win the 2016 NWSL Championship.

The game was by no means an easy one for the Flash, as Crystal Dunn came out hot to give the Spirit an early lead. In just the 9th minute, Dunn scored the fastest goal in an NWSL final when a long ball was sent in and Flash goalkeeper Sabrina D’Angelo came far off her line to collect. Dunn made a run from center of the field and outpaced D’Angelo. Dunn trapped the ball with her chest and fired off a shot before D’Angelo could get back in position, easily putting it into a wide open goal.

The Spirit would enjoy a 1-0 lead for only a few minutes after Lynn Williams moved the ball down the left flank before sending it  to Mewis. Mewis faked to the left to shake the Spirit’s Christine Nairn before turning and sending a right-footed shot past a diving Kelsey Wys and into the bottom right corner of the net.

Spirit coach Jim Gabarra’s game plan got a bit derailed when, in the first 30 minutes, he had to use his first substitution of the night to sub in Alyssa Kleiner for Caprice Dydasco after she went down with a left knee injury. Dydasco returned to the sidelines at the start of the second half on crutches and wearing a knee brace, but the extent of her injuries are still unknown.

With Kleiner in for the Spirit, both teams continued battling to take the lead, neither team could finish any of its attempts, sending the game into halftime with a 1-1 tie.

The second half of the game started off much slower than the first as both teams struggled to find the spark to energize their attacks. Part of that was because the increased physicality of the match resulted in several fouls that stalled any momentum generated by either side. In the 83rd minute McCall Zerboni was shown a yellow card after a hard tackle on Francisca Ordega, who was slow to get up after the tackle. Moments later, Ordega would again be involved in a collision, this time with D’Angelo, who stayed down. Luckily for the Flash, D’Angelo stayed in and would continue playing the rest of the match.

Despite attempts on goal by both sides, the game would remain tied at the end of regulation, and the game went into extra time. In what at first appeared to be déjà vu, Crystal Dunn came out and scored a goal in the opening minutes of extra time to put the Spirit up 2-1, followed by an attempt on goal by Sam Mewis. This time, however, Wys was able to collect Mewis’s shot to prevent her from once again leveling the score.

The second extra time once again saw both teams putting a number of shots on goal, only to be denied. Lynn Williams tried to find Taylor Smith at the far post during one play, but Wys was able to punch the ball out enough to disrupt the play, causing Smith’s shot to go wide of the post.

Both teams continued fighting hard with the most energy the game had seen all night. The Flash desperately tried to find a goal while the Spirit did everything defensively to prevent one.

It looked as though the Spirit were going to walk away with the win at the end of the extra time, but Lynn Williams, the NWSL Most Valuable Player and Golden Boot Award recipient, was not finished for the night. With just seconds left in extra time, Williams received a ball from Jessica McDonald and headed the ball into the back of the net. That evened the score up at 2-2 and sent the championship match to penalty kicks for the first time in NWSL history.

Abby Dahlkemper was up first for the Flash, stepping up to the mark and easily putting her shot past Wys. Ali Krieger went first for the Spirit, but she let off a bad shot that was easily saved by D’Angelo.

Jaelene Hinkle went next for the Flash, and her shot went past Wys to give the Flash a 2-0 lead. However, Christine Nairn also converted to put one on the board for the Spirit.

Jess McDonald’s shot sailed over the crossbar, while Katie Stengel converted her penalty kick to even things up. Lynn Williams seemed to confuse Wys with her shot, easily putting it into the back of the net for another Flash goal. D’Angelo would then deny Tori Huster’s shot, preserving the Flash’s 3-2 lead.

Sam Mewis then stepped up for Western New York, but Wys stopped the shot. Diana Matheson was up next for the Spirit and had to convert the shot to keep her team in it. However, D’Angelo came up with a huge save to deny the Spirit.

With D’Angelo’s save, the Western New York Flash won the match to become the 2016 NWSL Champions. For her efforts, D’Angelo was also named the championship match’s Most Valuable Player.