MVP D’Angelo wins one for her grandfather 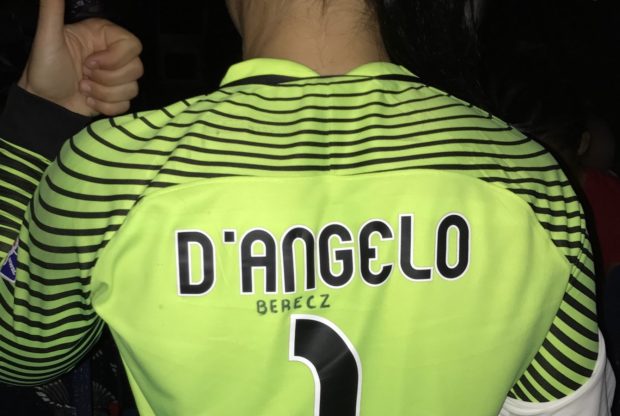 HOUSTON, TX. — NWSL Championship Game MVP Sabrina D’Angelo said the win over the Washington Spirit was for her grandfather, Alex Berecz, who passed away one year ago to the day. The Canada international was the hero at the end of a thrilling final, that saw her save three penalty kicks after the game with the Spirit finished 2-2 following extra-time. The game looked to be heading for a Washington victory after the Spirit went 2-1 up in overtime thanks to Crystal Dunn’s left-foot rocket, but Lynn Williams’ header in injury-time at the end of extra-time, took the game to PKs

D’Angelo told The Equalizer that in the period between the game finishing and PKs starting, she searched out her family in the stands to help ease her nerves. “I looked up at the stands at my parents and my best friend, smiled at them, and knew that everything was going to be okay. Today was a win for my grandfather Alex, who died a year ago – he was on my back tonight.”

The Flash goalkeeper recovered from a rocky start that saw her rush from her goal line after nine minutes following a through ball from Megan Oyster to Crystal Dunn. Dunn’s pace was too much for the 23-year-old, as she nipped the ball past the oncoming keeper and slotted into an empty net to give the Spirit an early lead.

D’Angelo admitted that she misjudged the play, which resulted in the U.S international forward taking advantage, much to the frustration of the young keeper. “I just misread the through ball and thought it might have skipped a little bit more towards me and it didn’t. She’s obviously a phenomenal player and was going to capitalize on that, so it is what it is.”

Despite the early error, D’Angelo was able to regroup and dealt with most of what was thrown at her, which was largely Spirit efforts from distance. She could do nothing about Crystal Dunn’s left-foot thunderbolt at the start of extra-time, but 30 minutes later would have the pressure of penalty-kicks following Williams’ late leveler.

She revealed to media after the game that she felt the team would go onto win after Williams’ equalizer, and that Taylor Smith had predicted how many penalty saves she was going to make. “I had a gut feeling that as soon as Lynny scored, I knew we were going to win at PKs and had the confidence that I was going to make saves. It’s funny because Taylor said ‘you’re going to save three of them,’ so its funny the way it worked out.”

Smith’s crystal ball was correct, as D’Angelo made three spot-kick saves from Ali Krieger, Tori Huster and Diana Matheson – the three players who have been with the Spirit since day one of the NWSL.

Coach Paul Riley said the team had been practicing penalties in training every day for the past two months, and had every confidence in his goalkeeper once the game had ended level. “Sab is really good on penalty-kicks, she’s low to the ground and has low center of gravity. I was just saying to myself behind the glass, ‘just gamble Sab, just gamble,’ and thankfully she gambled the right way.”

The win for Western New York is the first NWSL Championship for the club, and Riley’s first final victory after two defeats while in charge of the Philadelphia Independence.

D’Angelo gave credit to her coach for installing an underdog mentality in the side that saw her team defy the critics, and claim an unlikely victory against the odds. “For the most part we felt like the underdog, and today it was the same, sometimes its easier to be the underdog, there’s not as much pressure. We bought into what we believed in, our motto was to ‘move the bolder’, and we did that.”

D’Angelo’s award as MVP is the first to be won by a goalkeeper in a Championship Game from any era – the NWSL, WPS and WUSA.