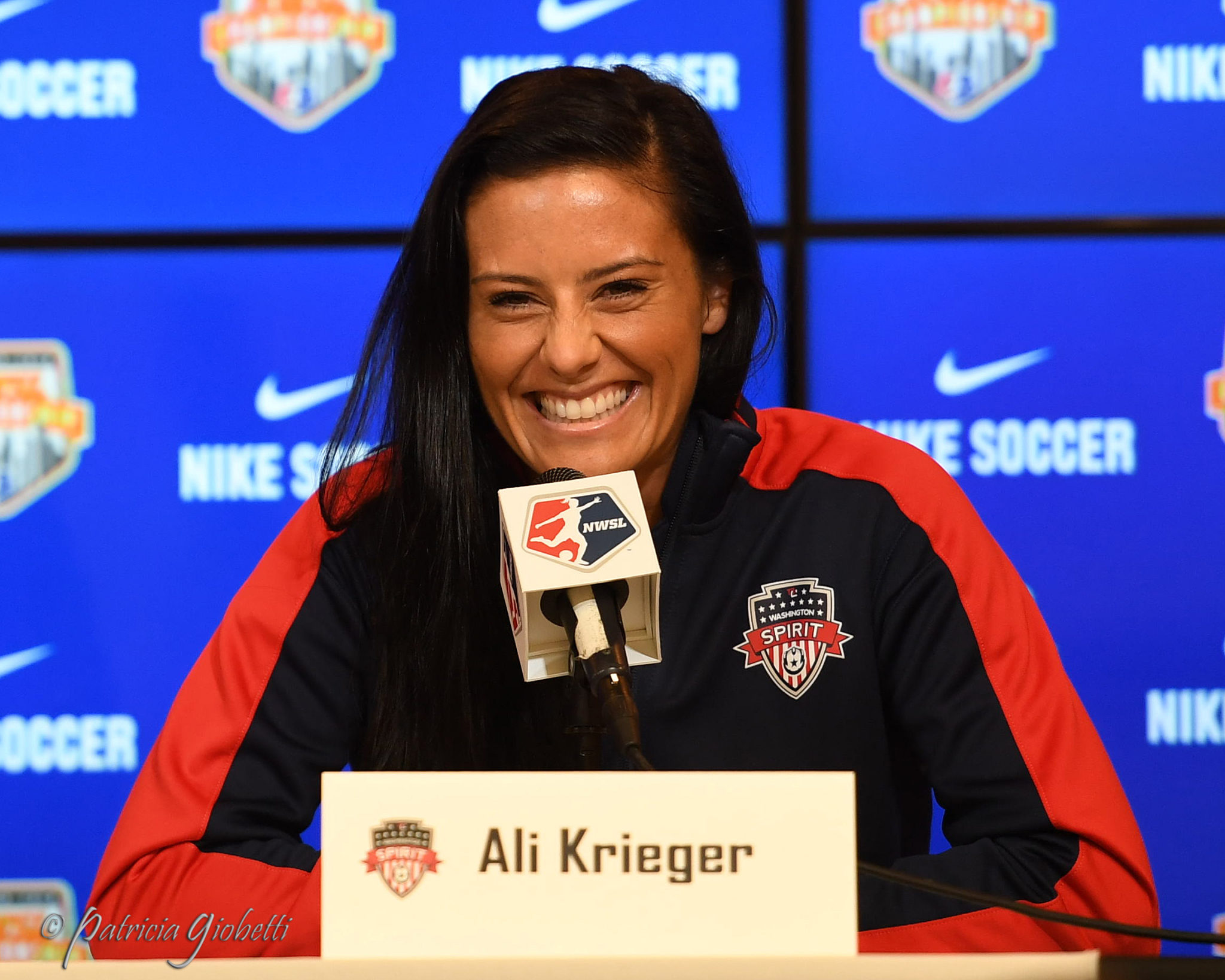 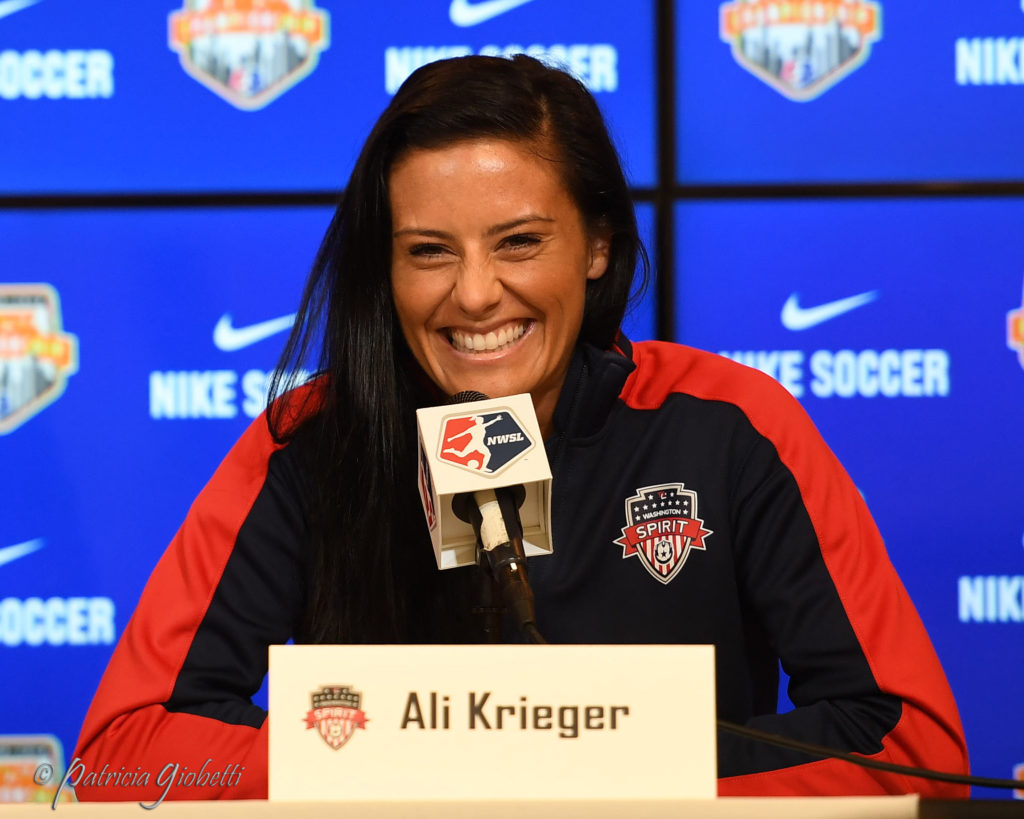 Ali Krieger hopes to add an NWSL trophy to her collection on Sunday. (Photo Copyright Patricia Giobetti for The Equalizer)

Fittingly on Sunday, the Spirit will take the field in the season’s last contest. The club was also involved in the first game of the 2016 season, a game against the Boston Breakers which was a nostalgic nod to the 15th anniversary of women’s professional soccer in this country. In essence, the league’s championship brings the season full circle.

Sunday’s final also brings Spirit captain Ali Krieger’s soccer journey full circle in some respects.  When the Freedom debuted in 2001, in WUSA, Krieger was a high school student in Northern Virginia. Similar to the area’s current team, the Freedom struggled the first season but capped off its third and final season in WUSA with the league title.

After graduating from Penn State and with no domestic professional league to play in, Krieger made the gutsy decision to move abroad to play. With FFC Frankfurt, the right back was challenged both and off the playing field. It was here that she became one of the best outside backs in the world and a mainstay with the U.S. national team.

In her five years across the pond, Krieger also found incredible club success. In 2007-2008, FFC Frankfurt captured the German cup, the Bundesliga, and the Champions League Final, collectively known as the treble.

In late 2012, the formation of NWSL was announced. When the national team allocations were announced, Krieger’s return was probably the biggest surprise. While several players in the contingent were returning to their hometown teams, only Krieger’s return was two-fold, both back to the U.S. and her hometown.

That first season wasn’t what Krieger had in mind when she returned stateside, though, as the Spirit finished last in the league with a woeful goal differential. Since that inaugural season, Washington has steadily improved each year. Now, the club is the only one in the league to make the playoffs three straight seasons.

After the semifinal win against Chicago last weekend, Krieger reflected on her decision to come home and the opportunity to play in the final.

“It meant a lot for me to be here not only to be available for the national team but help grow the game in the United States,” she said.  “You know winning in Frankfurt in the Champions League, winning that, winning the German Cup, winning the Bundesliga that was incredible for me to do but then I wanted to come back to the United States and I want to win a NWSL championship because that would be so close to home and close to my heart especially for the hometown team and in front of my family and friends and something that I can give back to a town that has given me so much with football.”

{MORE: For Lynn Williams, USWNT call-up, NWSL MVP award made for quite a memorable day}

While it’s impossible to say with certainty how a team’s season will go, given the myriad variables at play, it is possible to say something felt different about this year’s Washington Spirit team from the start. On media day, just before that first game against the Breakers, head coach Jim Gabarra and a group of players including Krieger fielded questions. For one of the questions initially directed at Gabarra, Krieger also volunteered an answer, something of a rarity among athletes. The question was geared at assessing how the team how dealt with late winter weather ruining the club’s preseason slate. It wasn’t so much what Krieger said but how she said it, with a steely-eyed confidence, that was memorable.

“We have an advantage over I think every other team in the league just having a core group of players that have been with the team for the past four seasons and I think that’s such a great advantage for us because we’re not interchanging our entire squad,” she said. “We actually are working on just filling in a few holes where we need it and I think that’s something great from our coaching staff and our club to consistently trust in the players that we have and I think going into this season that’s an advantage we have over everyone else.”

It wasn’t just in that press conference that Krieger showed her confidence and commitment to the club this season. Following the U.S. national team’s early exit from the Olympics, the Spirit captain quickly returned back with the team to play a makeup match in Houston. In a piece released by the Spirit the week following her return to the squad, Krieger talked about her motivation to come back early.

“It’s simple,” she said, “I view the NWSL and my club football as just as important as the U.S. women’s national team. I really want to be a part of the success here and hopefully win the (NWSL) Championship.”

While that action drew praise, how Krieger as the team captain navigated a terribly complex situation a month ago is perhaps more telling. Owner Bill Lynch’s decision to circumvent Megan Rapinoe’s planned protest of the national anthem put the Spirit in the middle of an ongoing and very continuous public issue. Such an event could have torpedoed the team’s season but Krieger’s efforts to find common ground with her teammates on a very divisive issue possibly saved them from such a fate.

Whether or not Krieger will realize her dream of lifting the NWSL trophy for her hometown team remains to be seen. She has, however, played a central role in returning her hometown which was once the epicenter of the women’s game to the forefront again after a hapless start in the league. While athletes’ careers are typically measured by trophies, awards, and honors, undoubtedly the fans of the Spirit would say that’s  accomplishment with a worth difficult to measure.