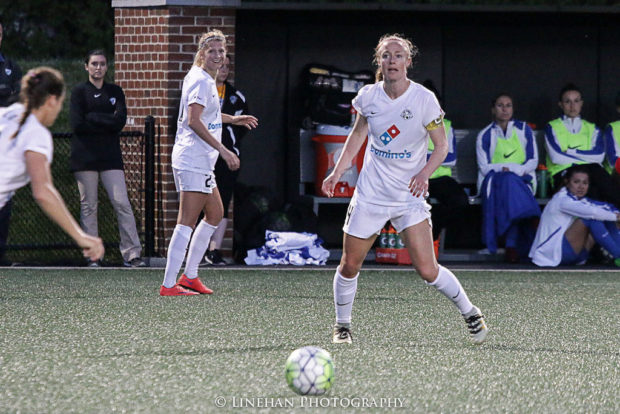 Becky Sauerbrunn is on the Best XI again and is the only player to appear on all four. (Photo Copyright Clark Linehan for The Equalizer)

Becky Sauerbrunn’s three-year reign as NWSL Defender of the Year ended earlier this week, but the FC Kansas City captain is now the sole player to have made every Best XI. She was joined on the squad by MVP Lynn Williams, Goalkeeper of the Year, Ashlyn Harris plus Lauren Barnes, who succeeded Sauerbrunn as the top defender. Jess Fishlock, the only player with Sauerbrunn to have been on the first three Best XIs, was named to the Second XI.

Barnes, Allie Long, and Christen Press were all named to their second consecutive Best XI. Joining Harris and Wililams as first-timers are defenders Arin Gilliland and Emily Menges; midfielder Tobin Heath; and strikers Jess McDonald and Kealia Ohai. Highlights of the Second XI include Christie Rampone who played every minute of the season during which she turned 41.

The Best XI includes two midfielders and four forwards. Voting was split between goalkeeper, defender, and a midfield/forward mix which allowed for the unbalanced team. The Second XI is a 4-4-2.