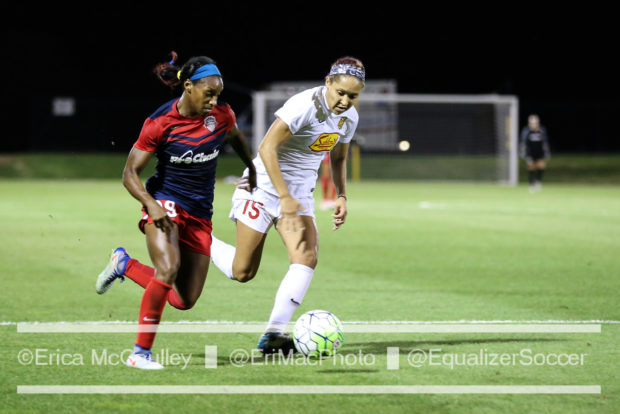 Crystal Dunn, left, battles Jaelene Hinkle during the most recent Spirit-Flash meeting, a 1-1 draw in Washington (photo copyright EriMac Photo for The Equalizer)

HOUSTON, TX. — Last week Washington and Chicago set the bar for semifinals, giving give fans a close, exciting game up until the very last minute of extra time. Two days later, Western New York and Portland not only raised the bar, they smashed it, offering up a game with seven goals, six yellow cards, and one ejected coach. The 2016 NWSL Championship is here, and if the semifinals were any clue, everyone needs to hold on tight: it’s going to be a crazy ride to the finish.

Set. Piece. Defense. If the semifinal against Portland proved nothing else about Western New York, it’s that they are deadly on set pieces. The Flash have a clear height advantage, so Washington not only wants to stay organized in the box, they want to avoid giving up set pieces in the first place as much as possible. The key to a Spirit victory is for them to play the calm, possession-based soccer that has served them well all season. Quick, tight passes are a necessity to avoid losing the ball and getting caught on the counter.

Speed. Besides set pieces, it’s Western New York’s best asset. They need to come out with high pressure from the start and force the Spirit into rushed passes, giving the Flash the opportunity to strip the ball and speed up the pitch on the counter before the defense can re-group. However, they want to avoid getting caught out themselves, as the Spirit also have plenty of pace up top. Goalkeeper Sabrina D’Angelo will want to be more decisive when coming out for the ball, as missed punches and not securing the rebound gave the Thorns some of their best chances.

Although she didn’t score last week, Dunn troubled Alyssa Naeher for all 120 minutes, and her aggressive matchup against Julie Johnston was one of the highlights of the game. Dunn attracts attention both on and off the ball and has a remarkable talent for slipping out of it. She’s also willing to drop back and provide tenacious defense. Look for Dunn to switch flanks at will, probing for a weak spot on the Flash backline and using her speed to burst past the outside backs.

Mewis scored the first goal against Portland, and it was her interception and perfectly slotted ball that set up the last. She has grown into command of the Flash midfield, working as a box to box player. She is equally as strong playing as a defensive midfielder, muscling opponents off the ball, as she is pushing up into the attack, setting up play for her teammates. If any player is going to disrupt the chemistry of the Spirit midfield, it’s Mewis.

Zerboni was a workhorce against Portland last week. She logged miles up and down the left flank and was responsible for a significant portion of the Flash attack in the second half. Facing her will be Ali Krieger, who made her own sizable contributions to the Spirit attack in her semifinal and was, as always, a defensive force to be reckoned with. Neither player is inclined to back down and give space, so this battle should be fast and furious for all 90 (or 120) minutes.

Williams ran at Portland’s back line all afternoon last week, scoring a brace in extra time to win the game and proving her Golden Boot award wasn’t a fluke. It’s hard to imagine a Western New York victory that doesn’t have her playing a similar role. Standing in her way is Zadorsky, who finally returned to Washington’s backline after Olympic duty and injury. Regardless of who Zardosky’s center back partner ends up being, she is the anchor, and it’s up to her to keep Williams from getting the same chances again.

{RELATED: Good day for Williams with USWNT call up and NWSL MVP}

Washington’s left back followed up one of the worst games of her career by having one of the best, and the difference is a large part of the reason the Spirit won their semifinal. Her contributions tend to be overshadowed by those of Krieger and Dunn on the opposite flank, but she has been quietly responsible for providing a balanced attack and an opportunity to switch the field of play. Defensively, Dydasco has solid positioning and the pace to help out the center backs.

Much of the focus of Western New York’s speedy attack has been placed on Williams and McDonald, but Doniak is as capable of beating any team on the counterattack as her two more experienced teammates. She likes to take advantage of the attention placed on others and drive endline on the right wing, sending solid service into the box and earning four assists for the year. With three goals in the regular season and one so far in the playoffs, Doniak is a scoring threat as well.

Huster, Matheson reflect on Spirit’s long rise to top
Meet Scott Vallow: The man who will run the Flash bench