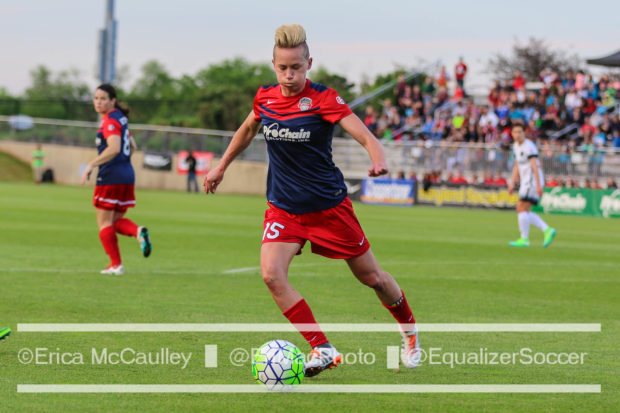 HOUSTON, TX. — Joanna Lohman lost two finals with the Philadelphia Independence. Sunday she gets another chance with her hometown Washington Spirit (photo copyright EriMac Photo for The Equalizer)

Joanna Lohmnn is one of those players who can sometimes go unnoticed. Not because she’s a bad player (she isn’t), and not even because she’s having a bad game.

No, Lohman can sometimes go unnoticed even when she’s putting in a performance that is crucial to her team gaining victory, because put simply, she does the dirty work of a holding midfielder that doesn’t always see defense splitting passes and goals smashed in from 30 yards. But every team needs a Joanna Lohman, and on Sunday she will have the opportunity to participate in her first NWSL Championship Game, having missed out last year with the Washington Spirit.

For her, the opportunity is long overdue, having not represented a club in a major final since she was with the Philadelphia Independence in 2011 – playing under the coach who will be in the opposing dugout at BBVA Compass Stadium, Paul Riley.

Lohman told The Equalizer that this Sunday’s game would be special, not because it has been five years since she played a major final, but because it was long overdue for her club.

“We know we deserve to be here, and it’s been a long time coming for this club, ‘starting from the bottom now we’re here’, as Drake would say,” she said. “Last week was a huge win for us after the semifinal defeats over the past two years, and now everyone is really, really excited to play on Sunday.”

Lohman, Tori Huster and Christine Nairn were able to win a pulsating battle with the Chicago Red Stars’ talented midfield last week, and Sunday will be a different challenge, coming up against the likes of Sam Mewis, and Abby Erceg, the latter playing a slightly different role for the Flash this year – similar to that of Lohman’s.

Lohman was adamant that the Spirit would need to play their normal game of possession football and playing the ball on the ground, to ensure they donn’t end up in an aerial battle with their opponents.

“I think the Flash midfield is different to that of Chicago’s, it’s very athletic and we’re going to have to work really hard to make our presence felt, in terms of physically. But we want to play our game and focus on what we’re good at. We’re a possession orientated team, and possession with a purpose.”

This will be Lohman’s third championship game having suffered heartache twice with the Philadelphia Independence in 2010 and 2011. But she concluded by stating how much different this final felt, almost bigger, and with a room filled with media and a big crowd expected on Sunday – she confessed it wasn’t something she had foreseen.

“Honestly, I don’t think I would have expected this,” she said. “For me personally this is a great moment. Having played for 12 years, I’ve been in two finals, but it didn’t feel like this. This is different for me because this is my home side and I care so much for this team. To bring home a championship for this team and our fans, would be one of the best moments of my life.”