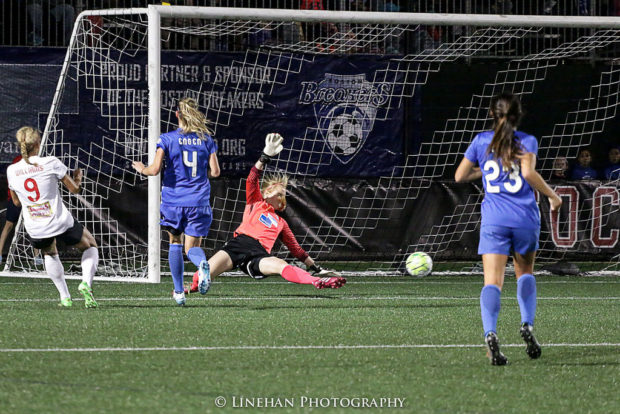 Lynn Williams, left, scored the goal that won her the Golden Boot. Thursday she added the MVP and a national team call-up (photo copyright Lienhan Photography for The Equalizer)

HOUSTON, TX. — Thursday was a very good day for Lynn Williams. By morning she was called into the national team ahead of two friendlies against Switzerland later this month. By afternoon she was named NWSL Most Valuable Player. After meeting the media, she went to train with the Flash as they prepare for Sunday’s NWSL Championship.

The day did not exactly break for Williams the way it did to the outside world. A team administrator called her over a week ago with the national team news – “I didn’t even catch his name because I was so excited”—and she was alerted Wednesday night about being named MVP. But the smile she wore during NWSL Championship media day said she was enjoying the moments.

“I just found out last night about the MVP thing and that is incredible,” she said. “There are so many great players in this league so to be considered one of them is just such an honor.”

The reasons Williams won MVP are easy enough to recite. She notched 11 goals to go with 5 assists and helped the Flash reach the playoffs when few thought they would be there. What makes Williams’s honors so remarkable is that a year ago she was fresh off knee surgery. Microfracture surgery, she had, a procedure that has cut down the career of many athletes.

“When we were playing Seattle I got my cleat stuck in the turf. When I went to go stop my knee kind of buckled on itself,” the 22-year old striker recalled. “My bones hit together. I had a big bone bruies but it tore off some of my cartilage. I had a meniscus surgery previously. So I had to have microfracture surgery with the bio-cartilage with a bone marrow, stem cell transplant thing, all crazy.”

If it seems like Williams is looking back with any disdain or bitterness, she is not. In fact she cheerily recounted the ordeal, finishing up with: “Yeah that was quite the surgery. But I feel great now.”

Part of Williams’s calmness about the surgery is that, in her words, “It wasn’t my first rodeo.” As a junior in college, Williams was playing through a torn hip labrum when she took an awkward fall and shattered her elbow. “It was basically a whole elbow reconstruction. A month and a half later they were like well you might as well get the whole thing fixed now.” And so the hip was fixed up too. “I missed a good chunk of time.”

The knee injury happened July 11 in Seattle and though Williams came out of that match immediately she was back on the field for a 90-minute shift eight days later. The plan was to see out the season, but when it became apparent the Flash were not going to be a playoff side, she decided to get the surgery and expedite the recovery.

The early ending to 2015—a season that began with Williams shuttling back and forth from Pepperdine while she completed her degree—turned out to be a blessing in disguise. When the Flash and new coach Paul Riley opened 2016 preseason, it was just in time for Williams to get full clearance to get back to playing soccer.

Another blessing in disguise was having been through rehab before. Without it, 2016 may have been a delayed start. “There’s times when I felt sorry for myself and just let myself go. I (decided) was going to eat whatever and take this time to relax. And it’s been really hard to get back. This time I decided, you know what, with the knee there’s a lot of things (I) can’t do, but this time I’m going to eat right, I’m going to do yoga when I can, I’m going to exercise. That arm bike was my best friend.”

Williams said she was frustrated in preseason when her touch was off in the early stages, but added that because of having taken her rehab so seriously, “My fitness wasn’t as terrible as it has been.”

The main point here is this. Lynn Williams climbed to the top of NWSL and earned herself a shot to suit up for the United States on the heels of an offseason that was more about rehabbing an injury than it was about soccer training. And in case her season slipped by unnoticed to some, her talents were on full display last weekend in Portland. After 90 mininutes that saw the Flash give back a 2-0 lead and Williams hit the crossbar once and run into Michelle Betos saves twice, the now MVP scored two goals in six minutes during extra time.

“I think what makes great athletes great athletes is that they keep going,” Williams said. “You have to kind of embrace failure. Me kind of knowing that you hit the crossbar, but you’re getting in the right position. You’re going to get that chance again. Michelle Betos has such an incredible game, but I knew if we kept pounding and pounding and shooting it was bound to go in. And that’s exactly what happened.

“I don’t think there was evet a second on the field when I thought we’re not winning this game.”

Williams is the fourth straight Golden Boot winner to be named Most Valuable Player. A common theme among the other three is that they all fell short of the NWSL Championship. Williams has already had an incredible week. A win on Sunday would be another feather in her cap, and a welcome split from her MVP predecessors.

“We have everything we need to do it. We’ve prepared so much for this that I think we have confidence. Hopefully we can bring it back to Western New York and it would just mean a lot to us to know that all of our hard work has paid off. So we’ll see.”