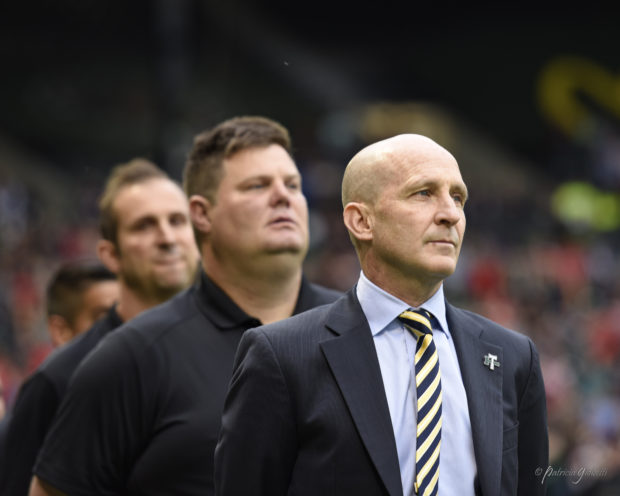 On Sunday, Providence Park will play host to its first post-season play-off match featuring the hometown Portland Thorns and the Western New York Flash – a repeat of the 2013 NWSL Championship. While the stadium hosted the NWSL Championship last year, the Thorns’ previous play-off appearances have both come away from home – so this will be a first for the Oregon state’s supporters.

But the game will also host, for the third season in a row, two English coaches coming up against each other in the shape of Mark Parsons, head coach of the Thorns, and Paul Riley, who leads the Western New York Flash. For both coaches, victory would mean a first appearance in the NWSL Championship, with Parsons having lost out in two previous playoff matches with the Spirit, and Riley falling short in his one playoff appearance in 2014, during a below par stint with the Thorns.

While it might sound harsh, there is no question Riley fell short during his two seasons in Portland, failing to make a final and struggling to impose his methods on a squad that was littered with stars – but stars that were often unavailable due to injury or international duty.

Now returning with the Flash, the Liverpool born head coach has a chance to once again show his credentials, which came into question from some quarters following the failure in Portland.

What he has now in Rochester is very different to what he had in the Rose City – a young, developing side with few ‘superstar’ names, which allows him to stamp his own mark on the team, and nurture them into the type of players that suits his style. The major difference this season with the Flash to his previous role with the Thorns is expectation.

Mark Parsons will have gone into his role knowing that anything less than the playoffs would be deemed a failure – especially after the club missed out last season. But for Riley, he went into a club looking to rebuild after a rocky road that had seen high profile players depart, and a group of young players needing leadership.

Riley is of course no stranger to playoff football, with experience in the WPS with the Philadelphia Independence, with whom he reached two championship games in 2010 and 2011, both losses.

Listening to him speak to the media this week, there is certainly an enthusiasm and positive tone in his voice that arguably disappeared towards the end of his time in Portland. This, clearly, has transitioned over to his players, with few predicting the Flash this year’s post-season.

That enthusiasm and positive tone, is without question matched by the coach who will be in the opposing dugout on Sunday.

Parsons was one of six new coaches appointed in the off-season across the league, but none of them came with the pressure or expectation that was placed on the former Chelsea Ladies Reserves coach. After two positive seasons with the Washington Spirit, Parsons was awarded arguably the biggest job in the league in attempting to replicate the Thorns’ success of 2013. For some, his appointment was a surprise. But winning the club’s first Shield, attracting players like Amandine Henry, and managing the internationals in his squad, has seen his stock rise significantly.

If England Coach Mark Sampson were to fail at next year’s European Championships, there is no question Parsons’ name would be mentioned as a possible replacement. His achievements are all the more impressive when you also consider the level of the coaches in the league this year – something he praised when speaking to media this week.

In terms of his team, Meghan Klingenberg gate-crashing a media conference call to sing a bar of Happy Birthday (it was nobody’s birthday) as a practical joke, also highlights that Parsons has created a relaxed atmosphere within the club, that contains plenty of camaraderie. But do not mistake this for a lack of professionalism – Parsons expects high standards from his players, and they will share his desire to be the team that breaks the tape at the finish line.

Defeat would be a bitter pill to swallow for both coaches, but not disastrous for either.

Both English coaches have moved their respective clubs onto another level, and while elimination at this stage of the season is arguably the worst time to lose, both will be encouraged by the campaigns they’ve had, and what lies ahead whether they are celebrating victory, or overcoming a defeat.