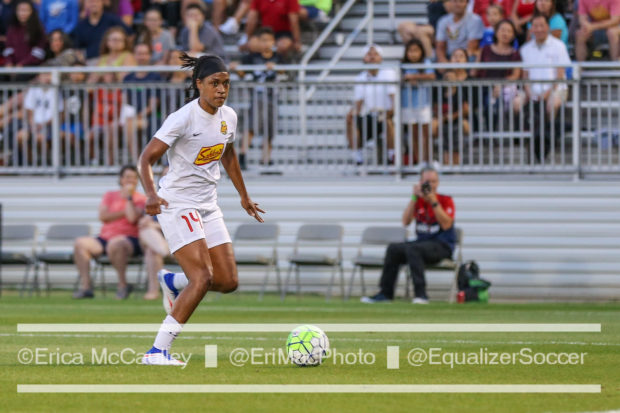 In a match that saw seven goals, six yellow cards, 30 extra minutes, and one coach sent off, it took a goal line clearance in the stoppage time portion of extra time to preserve a 4-3 win for the Western New York Flash over Portland Thorns FC. They will meet the Washington Spirit next Sunday at BBVA Compass Stadium in Houston.

The Flash raced out to a 2-0 lead before the Thorns crawled back into the match and forced extra time. But NWSL Golden Boot winner Lynn Williams scored twice in extra time and the Flash held on throughout the second extra time even after the Thorns rallied again with a goal just before the extra time break.

Paul Riley, who lost two finals as head coach of the Philadelphia Independence in WPS—including one to the Flash—was sent off following the Thorns’s first goal. Several fans seated near the action supported FS1 reports that Riley made contact with the 4th official. He will be suspended for the NWSL Championship. Assistant Scott Vallow ran the bench after Riley’s ejection and will likely do so again next week. Vallow filled in for Riley twice during the season, earning a win and a draw.

As the match ended with a close call near the Flash goal, it began in much the same fashion. Before a full minute had ticked off the clock, Flash goalkeeper Sabrina D’Angelo made a poor clearance and only a hustling clearance by Sam Mewis prevented the Flash from being down a goal almost immediately. The Thorns continued to control the middle of the park through 15 minutes but looked sloppy the few times the Flash worked into their penalty area.

Mewis then made her mark on the offensive side by sliding a ball through between a trip of Thorns defenders and out of the reach of keeper Michelle Betos, who looked to be screened and certainly got a late start in diving to the far post. Mewis received the ball after a long throw from Jessica McDonald was mishit by McCall Zerboni and bounced off of a few players to Mewis.

McDonald’s long throw would continue to be a factor. She started another scoring sequence the same way, this time in the 38th minute. The second ball came out to Zerboni, and with some extra space created when Abby Erceg tripped Lindsey Horan, Zerboni played wide back to McDonald who crossed it to the far post. Makenzy Doniak got up and hit a looping header over Betos for 2-0.

The first of many tide changes happened right after the ball was put in play. Thorns’ right back Katherine Reynolds blasted a long ball near the top of the 18. Christine Sinclair let it drop as she worked her way around Alanna Kennedy and then beat D’Angelo with a sweet, one-time finish. Riley, believing Sinclair had fouled Kennedy to gain position, then got his marching orders.

The beginning of the second half was the Betos show. The 2015 NWSL Goalkeeper of the Year made a save on Williams by sprawling out to grab her low shot. Betos had denied Williams with an acrobatic save in the first half. The keeper later slipped across her line to stone Doniak at point-blank range and had to leap to the corner to knock a Zerboni knuckler out of play.

The Thorns eventually regained their footing and sent the 20,086 at Providence Park into a frenzy when Emily Sonnett pounced on the remnants of a free kick and poked it home to equalize. D’Angelo came off her line to challenge a Tobin Heath free kick but was unable to make a clean play resulting in a scramble in front. The Thorns pushed hard to win it in regulation, to no avail.

The break after the full 90 revitalized the Flash. In the 99th minute, another long McDonald throw put the Thorns off balance. Erceg raced over to get first touch on it and Mewis stuck a foot in to keep the play alive for Williams who used positioning over power to put the Flash back on top.

In the 104th Mewis led a counter attack and waited for the perfect time to play the perfect through ball to Williams who used a single touch for another well-placed goal. Williams joined Carli Lloyd (2013 semifinal) and Amy Rodriguez (2014 NWSL Championship) as NWSL players with two goals in playoff matches.

There was life still in the Thorns. In the added minute of the first extra time, Meghan Klingenberg sent in a cross that neither team won cleanly near the top of the six. Horan got position on Hinkle and stuck it in to make it 4-3.

The Thorns pressed throughout the second extra time session, but the match was finally out of goals. The last ditch effort was a long ball by Sonnett that D’Angelo again mishandled. It went behind her and appeared to be heading into her goal when Abby Dahlkemper calmly retreated and head it out of the way.

As Jenn Hildreth on FS1 shouted, “saved off the line!” the television clock read 122:06. The final whistle came soon thereafter, and the most dramatic NWSL match in the league’s four-year history was in the books.