Lauletta: Thoughts from the end of the Red Stars season 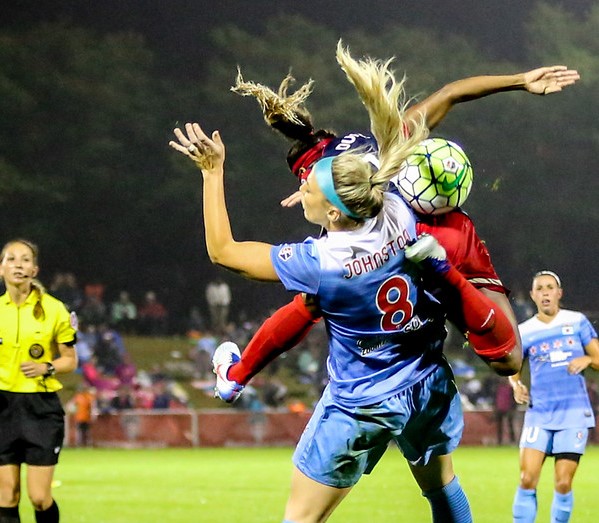 As the minutes ticked away, Friday night’s NWSL semifinal between the Spirit and Red Stars was turning into the sort of match that did not deserve a loser. It was not the crispest soccer ever played, but the Red Stars fought their way out of a first-malaise to tie it late, and star players like Christen Press and Crystal Dunn put on solid, energetic performances.

Here are a few observations:

For stretches of the night Christen Press was sensational. During the final 15 minutes of regulation she had the look of a player who had just checked in off the bench. She was that much quicker than the players around her. When, in the 81st minute, she slipped behind Shelina Zadorsky and hit a one-time volley to equalize, it was starting to feel like Press would own the night.

And then came the miss off the crossbar with the goal untended and what surely would have been the match-winner on her foot. Vanessa DiBernardo hit press with a fabulous ball over the top that put her behind the defense. Spirit keeper Kelsey Wys made a futile attempt to come off her line but Press dribbled around her and needed only to redirect the ball into the net.

Repeated looks show that it was not quite as easy a finish as it looked on first glance, but still it was one Christen Press should make any day of the week. Her equalizing goal had a much higher degree of difficulty and far less time to execute it.

Rory Dames, in comments posted on Twitter by backlinesoccer.com, said that the only reason Press was able to miss the shot was because she was good enough to earn it.

I think that the amount of growth that Christen had had probably since the World Cup, probably through now, has been exceptional. Somebody asked me this during the week, about the leadership and where we were going to get it from, and for somebody who’s never been asked to take that role, hoe she took some of the younger kids in, and some of the other stuff she’s done with the group that you guys will never know about. She’s really far and exceeded my expectations. I know you guys are gonna think that she got in late and had a chance and then hit the crossbar, but how many players in this league are going to take that ball down, cut the first girl to take a touch to split the two and then around the keeper? So if you guys want to fault her for hitting the crossbar, have at it. But there’s probably only three players in this league that make that play and she’s in that position because of her ability, because of who she is. So if I get the chance 100 more times at the exact same moment at any game then I pick her 100 times to be the one who has it. So she’ll bounce back. She’s dealt (with) harder things in the last year and a half than that.

Press, you surely recall, had the fatal penalty miss in the U.S. quarterfinal loss to Sweden, skyeing the anchor leg high to set the stage for a Sweden win. Forty-nine days later, Press had the Red Stars first trip to the final on her left foot and hit the bar. Boiling her career or even this year down to those two moments hardly seems fair, but as it stands today they will be difficult ones to live down.

The effort was off the charts

Everyone has different reasons for watching sports. Near the top of my list is seeing world class athletes give everything they can possibly muster in order to win a competition. There was no shortage of this on display Friday night at the Maryland SoccerPlex.

For starters, Crystal Dunn’s battles with Julie Johnston were something to behold. The Olympic teammates fought and clawed for position all night with each of them getting the better of the other at different times. Johnston may or may not have gotten away with a foul in the box on Dunn, who calmly got up and continues playing without a word of dissent for the referee. And in possible their most delightful encounter, a surely beaten Dunn somehow slithered her way to the other side of Johnson to create a chance on the end line.

Press’s extraordinary final 15 minutes of regulation is mentioned above. Then there is Ordega. The Nigerian only played 90 minutes in two matches for the Spirit this season. Yet there she was in the 103rd minute, tracking all the way back near her own end line to put consecutive slide tackles on Arin Gilliland and Vanessa DiBernardo. It was plays that like that allowed the match to remain tied that allowed her to make the run that led to the game-winning strike.

Other performances stand out as well. Christine Nairn went quiet for chunks of the second half but was very much alive and well as the key contributor to the game-winning goal. Caprice Dydasco bounced back from a poor match six days prior to play a fine match against the same opponent. Her left back counterpart, Casey Short, terrorized her side in a great chess match with Ali Krieger and sent in the cross that led to the Press equalizer.

spirit possession made for too much space

When the Red Stars do the postmortem on the match they will surely lament the massive amounts of space given to Spirit attackers at different times during the evening. On the first goal, Tori Huster and Zadorsky both had loads of time and space. Ali Krieger made a great run to get on the end of Zadorsky’s cross, but the cross was made easier by how much time she had.

The game-winning sequence began with Nairn collecting the ball deep and she was allowed free passage through the middle of the park. That may be partially the nature of being more than 100 minutes into what was a fiercely contested match, but Nairn continued to have room to operate on her next two touches.

At other times the Spirit possession game was able to successfully take Danielle Colaprico out of the match. The Red Stars’ deep lying midfielder has controlled many a match by winning balls off attackers and making all of the right decisions in spring boarding the attack. There were certainly some of those moments on display in the semifinal but the Spirit did a fine job playing keep away by mixing up their attacking patterns. Even when the Red Stars fixed their shape in an attempt to keep the Spirit pinned on one flank they were often able to break the pressure and build.

The Red Stars win over the Spirit last weekend was their first since 2013. In the interim they were 0-6-1 and had suffered some particularly painful defeats. The first one, in their final meeting of 2013, was called after 80 minutes because of dangerous weather conditions combined with a curfew at the SoccerPlex. The 1-0 loss officially extinguished the Red Stars admittedly slim chances of reaching the playoffs.

A year later the Spirit won in a wild finish when Press was denied by a spectacular, Ashlyn Harris save late and then Yael Averbuch took it the other way—with some help from an alert Diana Matheson—and hit one of the goals of the year to win it. That was the third loss that season to the Spirit, all by one goal, and on the final table the Spirit edged out the Red Stars for the final playoff berth on the head-to-head tiebreaker when they both finished on 35 points.

Friday night the Spirit did it again, derailing the Red Stars dream of playing for the championship. Whether it be the slow start, Press’s near miss winner, or the inordinate amount of time and space given on too many occasions, this marks the third time in four years the Red Stars will go home with one eye looking back at the Washington Spirit.