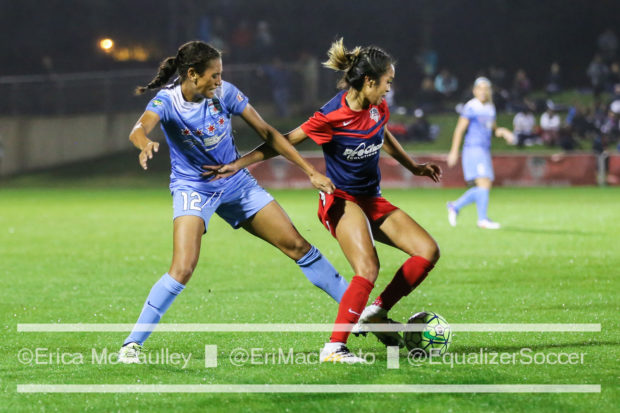 BOYDS, MD. — Friday night, the Washington Spirit punched their ticket to their first NWSL championship. While we wait for Sunday’s game to determine who the Spirit will face in Houston, here are a few of thoughts about the first semifinal.

The Red Stars Will Be Back

After last year’s semifinal loss in which a couple of defensive mistakes took Chicago out of it almost as soon as the contest started, the team kept themselves in this onew despite a rather rocky first half. They felt the momentum shifting after the late equalizer from Christen Press to send the game to extra time.

Chicago was just inches away from winning in regulation when Press hit the crossbar in stoppage time, and on the game-winning goal for the Spirit, if the referee doesn’t accidentally get in the way, perhaps it doesn’t happen.

“I think that will be the hardest thing for me to get over from feeling for the players,” Chicago head coach Rory Dames said about the ball bouncing off the referee, “Obviously, she’s on the field, she’s part of the game. It’s not her fault. I don’t think we lost because of the referee but in the second overtime, that’s a tough a way to get your team caught in transition. Proud of the group. Very resilient and I still think the group is only going to get better. We’re really young so just get on learn from this and keep going.”

This one stings certainly but Chicago getting even better is a scary thought for other teams in the league. Looking at the Red Stars’ roster, it’s quite possible that nearly half the Best XI will come from the Windy City. That, of course, bodes well for the future but it also speaks volumes about the most underrated coach in the league. In 2013, the Chicago Red Stars were dealt a less than stellar hand by NWSL when the allocations were handed out.

What Laura Harvey is to trades in the league, Dames is her equivalent in drafts.  No other coach can come close the record that Dames has accumulated over the short history of the league. Vanessa DiBernardo, Danielle Colaprico and Arin Gilliland are all players who are in the conversation for U.S. national team call ups. Dames has not only identified talent but also helped develop and find the right fit for these players.

{LAULETTA: Thoughts on the end of the Red Stars’ season}

At Virginia, Colaprico played everywhere in the midfield, but her calling card was the ability to serve balls in from the wings. In fact, she is the ultimate leader in assists for the storied program, in part because of this. Dames, didn’t just select Colaprico, but had the foresight to put her and keep her at defensive midfield. Now, with Keelin Winters and Jen Jen Buczkowski retiring, she’s arguably the best defensive midfielder in the league.

In sum, if the Red Stars can keep most of the team together, and the team continues to draft well, Chicago has a good chance of lifting a trophy sooner rather than later.

Washington is a T-E-A-M

Much like the way Washington put together the second best record in the league, the game-winning goal wasn’t the result of a single player’s fantastic individual effort, but the combined efforts of a group of players. It’s fitting that the play that sends the Spirit to their first NWSL final is of this variety as the goal that Franny Ordega knocked in in the second overtime period encapsulates the team this season.

Although it’s Ordega’s name is on the scoresheet, Christine Nairn made three spot-on passes in the sequence, Katie Stengel, not known for her speed, hustled to catch up to a ball that initially seemed destined to go out of play, and Diana Matheson also chipped in a stellar pass as well. All of these efforts culminated in Ordega crashing the net to put it away. Take any one of these efforts away, and the play falls apart. The same could be said of the Washington Spirit.

While it’s true that the whole seems to be bigger than the sum of its parts when it comes to Washington, it’s equally true that those parts are pretty darn good. Since each part is quality, none of the parts really stand out. Each week, there hasn’t been a need for a player to continuously create her own scoring opportunities, and usually no pressing need for a goalkeeper to make acrobatic save after acrobatic save to keep her side in it.

Moreover, no other team used its “reserves” as liberally and this also plays into the fact that no single player for the Spirit stands apart from the whole this season. Ask any of the Spirit players, and she’ll tell you, it took every player on the roster to get to this point. Although this is a common statement for athletes to profess, the statistics show in Washington, this holds true.

Perhaps this is why after the international players departed for the Olympics, Joanna Lohman was quick to criticize a piece that lauded the Spirit’s “bench” for a win against Kansas City at home. While the piece had good intentions, the use of the word bench seemed almost derogatory.  For the players, it seems “starters” vs. “reserves” or whatever terms are used, are genuinely arbitrary distinctions.

“We have a ton of players that you would call reserves or substitutes that are starters,” she said. “They are starters on any other team in this league and they are starters from week to week here. I think it’s that we can switch it up and can change it up across the board. We have a philosophy here and we try to stick to. Everyone knows what their expectation is no matter what position they’re in and I think that’s one quality that (we have). We might not have those individual awards but hopefully, we have this big award, a championship coming up.”

When asked about Washington coming up empty for the league’s individual player honors and that says about the club, perhaps goalkeeper Kelsey Wys’ painfully simple but true statement sums it up best.

“I think it says exactly that, we’re a team,” Wys said. “I think that individual awards at the end of the day are great but you know that’s what makes us so good. I think that’s exactly why we’re here right now because we have each others’ backs and we have something special in this group.”

Dydasco Has a Huge Night

After the Spirit had let in three goals in the match against Chicago last week, every preview about Friday night’s semifinal essentially said the same thing when it came to the Red Stars’ attack. They’ll look to attack down Washington’s left side of the field.

In truth, Dyadsco had the worst performance of her professional career a week ago. Every player has poor performances, it’s inevitable. How they respond to those moments is often more telling than the poor performances themselves. In this regard, Dydasco deserves some recognition.

The left back followed up her worst performance of her career with arguably her best. It seemed every time Chicago came down the left side, Dydasco was waiting and either knocked the ball giving the Spirit a chance set their defense or outright took the ball away. In the second half with Chicago playing into the wind, Dydasco was key the Spirit weathering the storm quite literally.  An impressive showing on any night but an especially impressive when put into context with last week’s game.