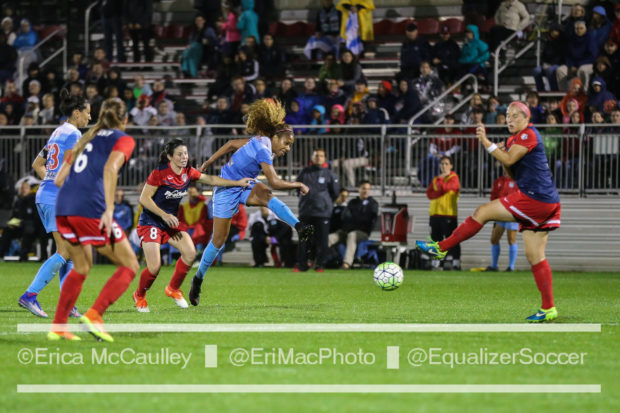 One hundred and eleven minutes into Friday night’s epic semifinal the Washington Spirit combined to score the sort of team goal that has defined their most successful moments of 2016. It began with Christine Nairn winning the ball deep and carrying it through open space in midfield. It ended with Nairn firing a far-post cross that Francisca Ordega slotted home to give the Spirit a 2-1 victory over the Chicago Red Stars and their first trip to the NWSL Championship.

Between Nairn’s arrival on the ball and her decisive assist, she found Katie Stengel in space down the right flank. Stengel played it back to Nairn who then worked a sublime give-and-go with Diana Matheson whose one-touch, return pass found its way gracefully between Red Star defenders. Nairn took one touch and then found Ordega with her second touch to thrill the crowd of 4,249 on a chilly, rainy night at the Maryland SoccerPlex.

That crowd, which brought energy throughout the 120 minutes of soccer, was put through the ringer late in the second half. The Spirit nursed a 1-0 lead on Ali Krieger’s 1st half goal but began to sag defensively as the clock ticked toward full time. In the 81st minute Christen Press made them pay. Slipping behind Shelina Zadorsky, Press got on the end of a brilliant cross by Casey Short and hit a one-time volley to level the match 1-1.

Press though, was left to rue a chance to win the match in stoppage time. Vanessa DiBernardo floated a ball over the top and Press split the Spirit defenders in the third and final additional minute of regulation. Press dribbled around a helpless Kelsey Wys and had an open goal in front of her for a trip to the final but her shot hit the cross bar and was cleared out of danger.

The Spirit controlled a majority of the first half and finally collected on it following a 36th minute corner kick that Ali Krieger started and finished. The initial effort was cleared to the right side and run down by Tori Huster. It looked as it Huster was going to let the ball run out of play for a throw-in, but at the last moment she played it to Zadorsky. Given enough space to be patient Zadorsky picked out Krieger making a run at the far post and delivered a perfect cross that Krieger was able to head past Alyssa Naeher.

The Red Stars got their teeth into the match after halftime, gained more of the midfield possession, and were more easily able to find Press who spent the night running at Zadorsky and her center back partner Whitney Church. They did not seem to have the same spring in their step after regulation which ended with Press’s ball off the crossbar.

The Spirit, losers in Seattle in semifinal matches each of the last two seasons, are on to Houston where they will play the winner on Sunday’s Thorns-Flash match in the NWSL Championship on October 9. The Red Stars joined the Spirit as teams to lose semifinals in consecutive seasons. In 2015 the Red Stars were unable to recover from some early miscues and lost 3-0 at home to FC Kansas City.

The Red Stars also received a late scare when DiBernardo had to be helped off favoring her knee in the dying minutes of extra time. Out of sub cards, they had to play the final few minutes with 10 women.

Casey Short’s unusual journey to NWSL
Lauletta: Thoughts from the end of the Red Stars season