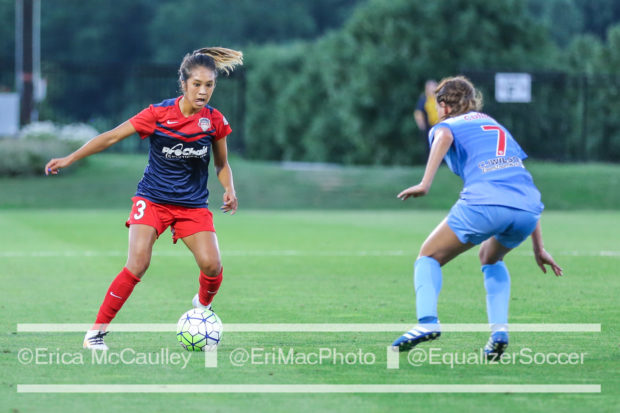 Caprice Dydasco looks for a way around Taylor Comeau during Spirit’s 2-0 win over the Red Stars in July. (photo copyright EriMac Photo for The Equalizer)

For the second year in a row, Washington’s semifinal opponent is a team who beat them a week prior. The Spirit hope to write a new chapter with the help of a home field advantage, while Chicago wants to erase last year’s poor semifinal showing. No matter who wins, one team will making its first appearance in an NWSL Championship.

Last week, Chicago had little trouble dismantling Washington 3-1. The Spirit have to put on a better show than they have in any game this month as they enter the playoffs on their first losing streak of the season. Estefania Banini made an early return from injury last week and should have a longer appearance on Friday, helping Crystal Dunn to stretch and split the Red Stars defense. Banini brings speed and skill on the ball, and will work with Dunn and Katie Stengel to form a three-pronged attack. Defensively, Caprice Dydasco and Estelle Johnson need to play tighter and close faster on their opponents, as all three Chicago goals came from Washington’s left side.

Although Michelle Dalton had little trouble dealing with what were mostly long-range shots from Washington, Chicago will no doubt be pleased to have Alyssa Naeher back in goal. Naeher ended the regular season tied for the most clean sheets in the league. The key for Chicago will once again be the play of Danielle Colaprico and Vanessa DiBernardo. If they can maintain possession and play the ball quickly up the field to Christen Press and Sofia Huerta, the Spirit will be kept on their heels.

Dunn’s low goal production this season has raised some eyebrows, but no one can question her impact on the field. She leads her team in assists with five, and the burden of creativity rests on her shoulders. If Washington is to win, Dunn will either be the one scoring or the one drawing attention and freeing space for her teammates. It’s not unusual to see two or three opponents converge on the speedy striker, and when that happens, Joanna Lohman and Christine Nairn need to be prepared to provide assistance and quickly switch fields in order to take advantage.

Huerta entered this season with a mission: remove all doubt; and she has done so. Proving she can score with or without Christen Press at her side, Huerta has dropped slightly further back on the pitch, and it’s paid dividends for the Red Stars. Whether she is scoring rockets (seven for the year, one behind Press), feeding her teammates, or starting play in the midfield, there is no doubt any longer that Huerta is a key player for Chicago.

This was undoubtedly the highlight of their last game, and there’s no reason it won’t be so again. Both are fast players so expect a quick-paced, aggressive battle along the flank. Dunn loves to rampage the right flank as the focal point of Washington’s attack, receiving balls from Ali Krieger before dribbling forward with a burst of speed, trying to juke defenders. However, the defender in this case has been making her name as a possible national teamer all season long. Short has the pace to keep up with Dunn and is a tenacious defender who won’t back down from 1v1. Expect to see plenty of action between these two, and whoever wins this battle may also win the game.

As the target forward, Stengel can be expected to hover above Chicago’s backline, maintaining a constant presence to either slip inside the defense or send balls through to her teammates, the latter one of her best qualities. Stengel and Johnston are both strong in the air and unafraid of physical battles on the ground, so look for anything happening around the box to involve these two.

Johnson spent the first half of the season on the bench but stepped into the center back position when Shelina Zadorsky departed for Rio, keeping it upon Zadorsky’s return and subsequent injury. After struggling last year, Johnson has shown an immense return to form. She’ll need to maintain that in order to avoid getting turned by Press again.

Like Johnson, Walls started the season quietly but has slowly come into her own. Earlier in the month she nearly scored a header against Seattle, but it wasn’t until she was sent into the starting lineup against Washington in place of an injured Stephanie McCaffrey that she finally found the back of the net this year, sending in a beautiful goal in the 26th minute that was ultimately the game-winner. With so much attention paid to her teammates, Walls could be the one to seal the deal again.

With ‘chip on our shoulder,’ Red Stars look to make run to NWSL title
Casey Short’s unusual journey to NWSL