With ‘chip on our shoulder,’ Red Stars look to make run to NWSL title 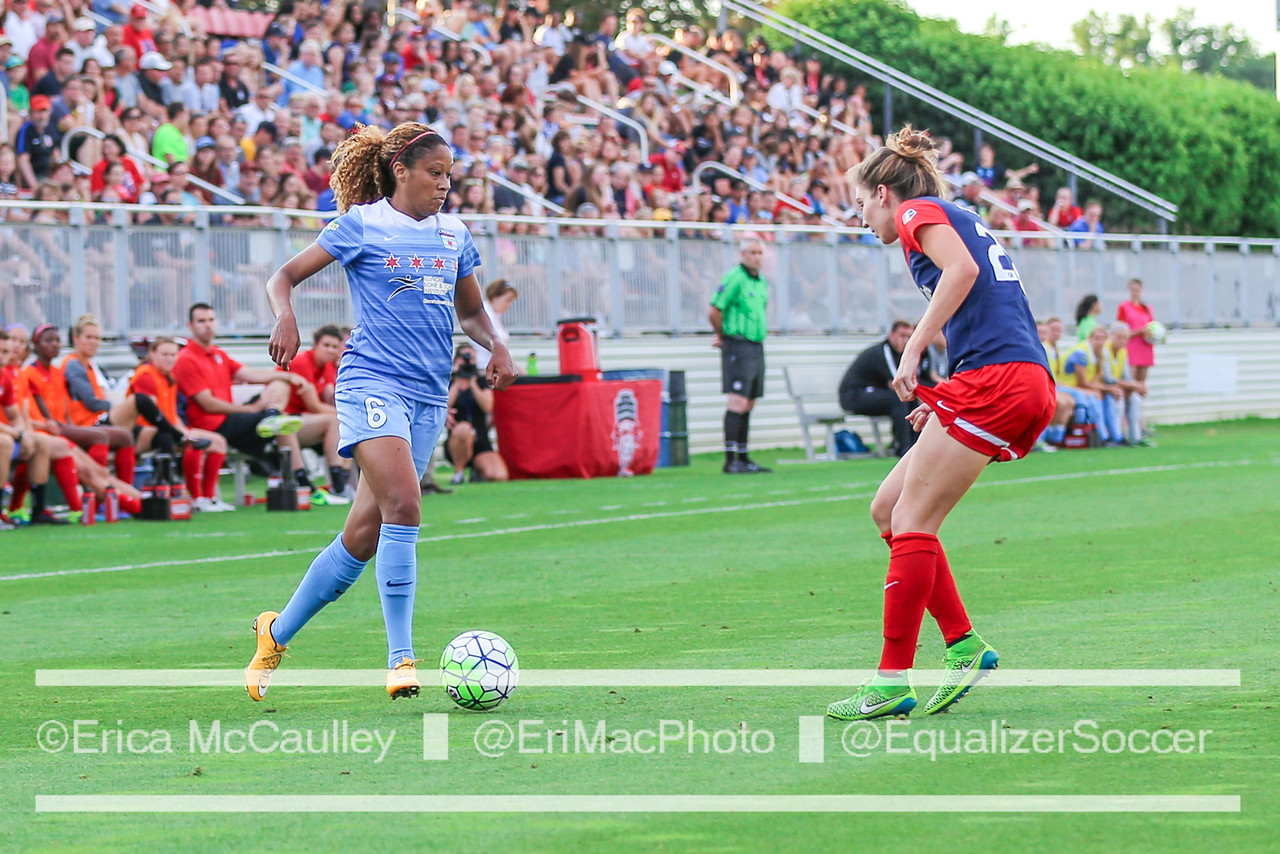 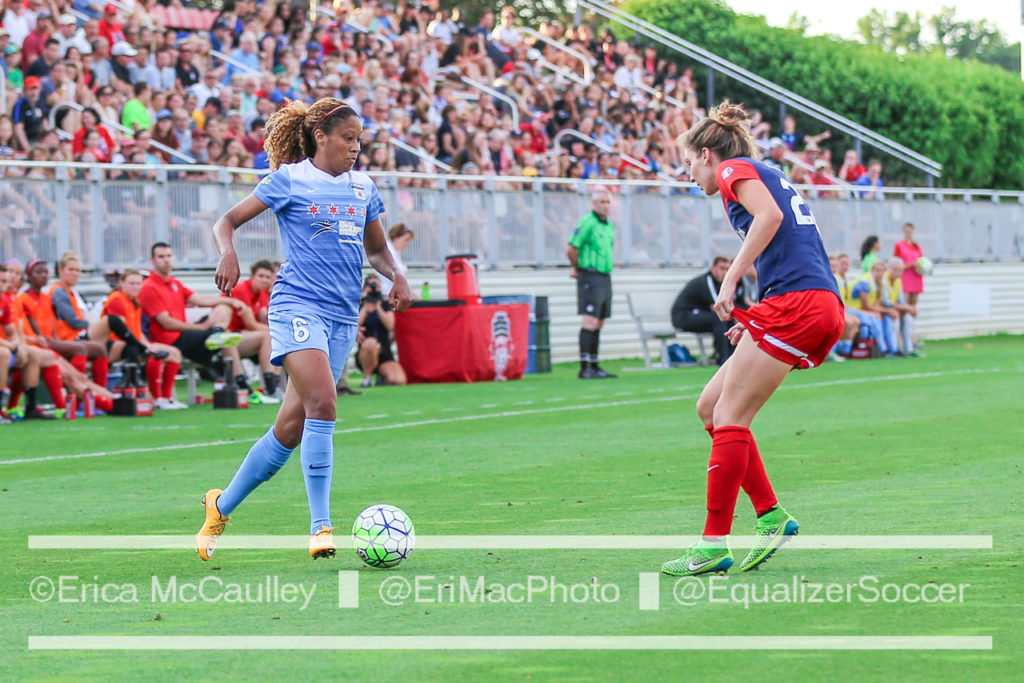 Casey Short and the Chicago Red Stars have the NWSL title on their minds. (Photo Copyright Erica McCaulley for The Equalizer)

Through four years of play in the National Women’s Soccer League, the Chicago Red Stars have made consistent and measurable progress. After finishing .500 in the league’s inaugural season back in 2013, Chicago disappointingly missed out on the 2014 playoffs via a tiebreaker with the Washington Spirit.

Then, in 2015, the Red Stars finished in second place, qualifying for the postseason for the first time and winning home-field advantage for their semifinal matchup with FC Kansas City. However, a flurry of first-half goals from their regional rivals in that contest stunned the Windy City side on their way to a 3-0 defeat.

Now, a year later, Chicago is back in the playoffs again with another difficult task ahead in Friday’s semifinal matchup with the Washington Spirit (8 p.m. ET, FS1).

The Spirit, who will host Friday’s game, have only lost at home once all season. They also boast the stingiest home defense in the entire league—conceding only five times in 10 matches this year at the Maryland SoccerPlex.

To take that next step, and reach the first NWSL final in their team’s history, Chicago’s offense—which has tallied 10 times in the team’s final five regular season games—will need to find a way through.

The obvious lynchpin of Chicago’s attack is U.S. forward Christen Press, who has once again scored a dazzling array of highlight-reel goals in 2016. However, the team is also finding help from mid-season acquisition Stephanie McCaffrey, midfielder Vanessa DiBernardo and Sofia Huerta, who has scored four times in her last five matches for the Red Stars.

Last year, many pundits pointed out that Huerta couldn’t seem to find the net when sharing the field with Press. In fact, all six of Huerta’s goals in 2015 came when Press was away on national team duty. That statistic turned into a narrative that the two players’ styles didn’t complement each other well.

This season, however, Huerta finally broke that streak when she tallied twice against the Boston Breakers in June. After the match, Chicago head coach Rory Dames quipped, “What’s everybody going to write about now that Sofia scored when Christen was here?”

In 2016, six of Huerta’s eight goals have come with Press on the field. While Dames concedes that Press still remains the focal point of his attack, he says Chicago’s offense has become more sophisticated this year.

“We’ve become a little bit more advanced in how we attack and how we build,” he said. “We’re able to get more players forward.” 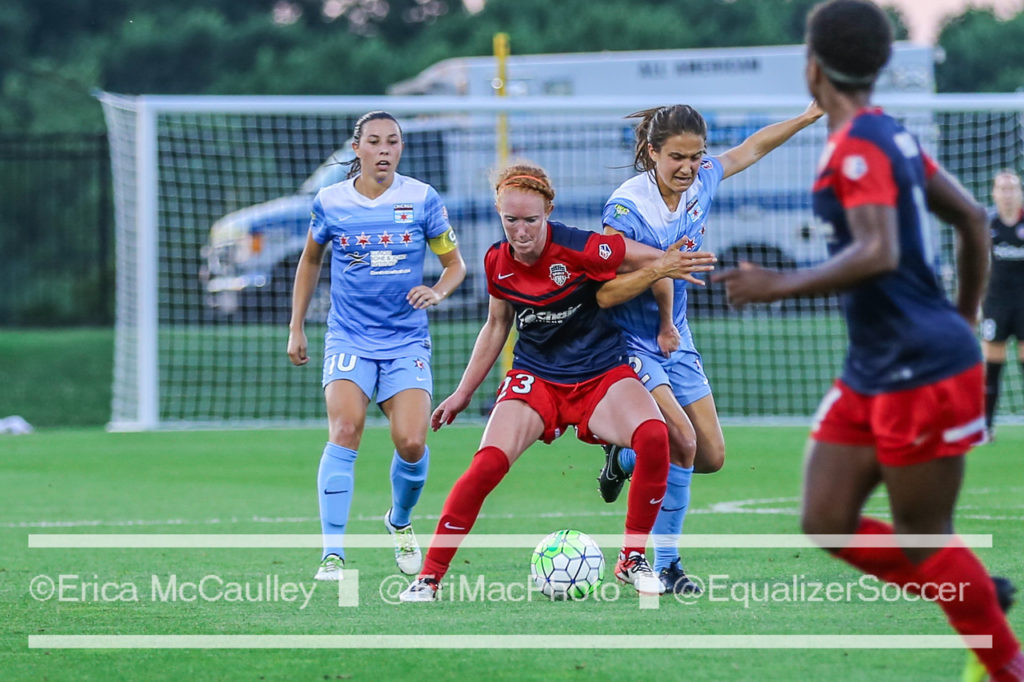 Vanessa DiBernardo and Tori Huster will battle in the midfield on Friday. (Photo Copyright Erica McCaulley for The Equalizer)

Dames also points out that the more opponents pay attention to Press, the more opportunities open up for her teammates.

Press, for her part, also feels a difference in this year’s squad. She says the Red Stars’ overall quality is better and that the team plays more through the midfield and less direct than last season.

She also adds that the relationship with her teammates is more symbiotic in 2016. “Playing with a group of girls that can score goals makes my job easier,” said Press.

Chicago’s attack this year is also more dynamic than in the past. Dames brought in McCaffrey mid-season because she brings something “a little different” and he has frequently praised her 1-v-1 ability. The team has also moved pieces around the board this year with Huerta playing both up top and wide in the midfield, Press as both a forward and the No. 10 and midfielder Vanessa DiBernardo rotating between a deeper-lying role and that of the team’s attacking midfielder.

Press argues that DiBernardo is the team’s most improved player this year. “She’s making my life very, very easy,” said Press. “That relationship between your No. 9 and No. 10 is very important and it’s given us a lot of success this year.”

And after last year’s shortfall, Press is ready to give the playoffs another shot.

“I’m personally really excited to play on Friday, to be back in the semifinals the year after a hard loss last season against Kansas City,” said the forward. “The group that was here last year—we have a chip on our shoulder about that match and how it went down. That’s helped motivate us to get back and we’re going to play with a lot of pride on Friday.”