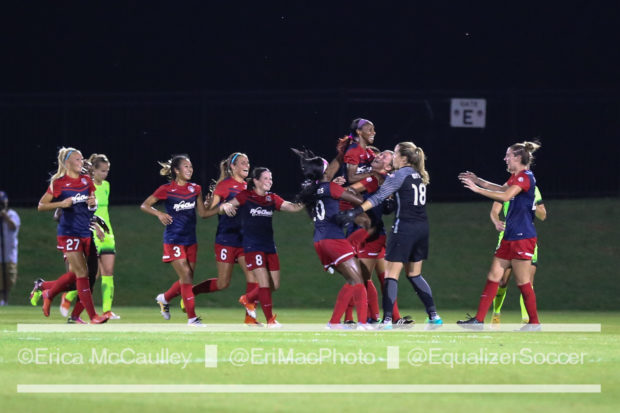 The Spirit fell short of winning the Shield, but Jim Gabarra says the ultimate goal is to win the NWSL Championship (photo copyright EriMac Photo for The Equalizer)

The first two were making the playoffs and hosting a semifinal which the Spirit will do for the first time ever when they play the Red Stars Friday night at Maryland SoccerPlex. Conspicuously absent from the list was the NWSL Shield, a trophy that was within the club’s grasp with two games to play. But losses in Seattle on September 11 and Chicago last weekend kept the door open for the Thorns who crashed through and took down the regular season hardware with a Sunday night win against Sky Blue.

On September 7 the Spirit closed out their home schedule with a resounding win over the Reign that secured the club’s first ever home semifinal andn put them in the drivers’ seat for the Shield. But a sprained ankle suffered by Crystal Dunn forced late lineup changes for the rematch four days later and the regular season concluded with a subpar performance against the Red Stars.

Gabarra came under some fire for the lineup he fielded for the match in Seattle though there were some late changes necessitated when Crystal Dunn came up with a sprained ankle. Still the only coach to be on a sideline for all 10 seasons of women’s pro soccer in the United States said the goal, like always, was to win that match.

“The approach was to not save anybody, but use all the resources we had but not risk anybody for the semifinal or in that case for the national team callup dates. (The Shield) wasn’t one of our goals, but it was sitting right there in front of us.

The Reign went into the match needing three points to remain in the playoff chase. It was a pursuit that ultimately came up short, but they were the better team on the night. Leading 1-0 late, Keelin Winters put it away with a goal in her final home match before retiring from soccer.

“We went up against a Seattle team that was probably a little more desperate than we were,” Gabarra said. “Seattle played a great match.

In Chicago this past weekend, Gabarra restored what looked to be a regular lineup including Dunn, but by the time the 2015 MVP scored all she did was cut the Red Stars’ lead to 3-1.

“In Chicago it was the same approach,” Gabarra said. “We were trying to win that game so we would win the Shield. The performance was not really good at all on a lot of levels. It was something that maybe we tried too hard or tried to do too much. We were not ourselves for the match in Chicago. It gives us the opportunity now to bounce back and learn some things about ourselves as a group but also what Chicago poses as far as challenges moving forward.”

While several Spirit players have been nursing injuries in recent weeks Gabarra said the only player who won’t be available for Friday’s semifinal will be Cali Farquharson who has a torn ACL. Though he did not mention her by name that would appear to include Cheyna Williams who was stretchered off late in the match at Toyota Park.

When Gabarra looked at the Spirit schedule before the season opened, he saw a difficult, and physically challenging stretch in September and hoped to be playing from ahead by the time it arrived.

“Honestly the plan was not to be out there chasing points or chasing a playoff spot in the last four games,” he said. On the two-game losing streak the Spirit carry into the playoffs he added, “I don’t see it as a hiccup or a slump. It was a very difficult part of the season. Sometimes teams don’t perform well in certain venues. Seattle’s record in Memorial Stadium is astounding.

“The reason you play for a home playoff game is to get home field advantage. We’ve done that. We were protecting some players. That was part of the plan. We were playing the players that were available and we were not going to risk maybe taking someone out of the semifinal and the final.

“I’m very gratified and satisfied with our season.”