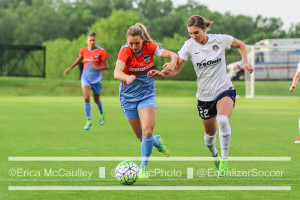 Kealia Ohai scored her 11th goal against Seattle, but it wasn’t enough to win the Golden Boot. (photo copyright EriMac Photo for The Equalizer)

In the final match of the NWSL regular season, the Seattle Reign continued their winning streak against the Dash, defeating the home team 3-2.

Most notably tonight, despite Kealia Ohai scoring her 11th goal of the season to tie Western New York’s Lynn Williams for most goals scored this season, she fell just shy of winning the Golden Boot thanks to the tiebreaker rules. In the case of a tie, the Golden Boot is decided by assists, and Williams had five assists to Ohai’s four.

Kealia Ohai scored first for the Dash, driving the ball down the left flank before sending a ball in from distance that chipped Reign goalkeeper Haley Kopmeyer for the Dash’s first goal.

Their second goal came in the 42nd minute when Denise O’Sullivan moved the ball down the field and to the penalty box before passing to Carli Lloyd. The ball was slightly behind Lloyd, who had to turn, collect and turn again before finally getting a look on goal. Her shot went into the upper 90 to double Houston’s lead.

Houston dominated the first half, going into halftime with a comfortable 2-0 lead. The Dash had won every game this season in which it scored first and went into halftime leading. Although the Dash were 0-6 when playing the Reign, only one team in NWSL history had ever overcome a two-goal deficit to win a game, and the odds seemed in Houston’s favor.

They weren’t though, as Seattle came out and scored three unanswered goals in the second half. That started off with Manon Melis catching Dash goalkeeper Lydia Williams off her line and chipping her from distance for Seattle’s first goal of the night.

Kim Little struck next for the Reign after a ball deflected off the referee and landed right at Jessica Fishlock’s feet. Fishlock passed the ball and Beverly Yanez dummied the pass, letting it settle at Kim Little’s feet just outside the goal box. Little took a quick touch before firing off a shot past Williams and into the back of the net. With Seattle’s second goal, Little reclaimed the all-time goals scored lead with her 32nd NWSL career goal.

In the final 10 minutes of the game, Seattle took the lead, courtesy of Beverly Yanez. Keelin Winters sent a through ball to Carson Pickett, who was able to race onto it despite a trailing Dash defender. Pickett sent a cross in to Yanez, who easily buried it in the back of the net with what would be the game winner.

One of Seattle’s strongest players of the night was captain Keelin Winters, who was playing the last match of her professional career. Winters announced two weeks ago that she was retiring from professional soccer to pursue a career in firefighting.

Since both teams were eliminated from playoff contention prior to tonight’s match, the final whistle marks the end of both teams’ 2016 seasons. However, NWSL action will return to Houston on Sunday, October 9 as they play host to the 2016 NWSL championship final.