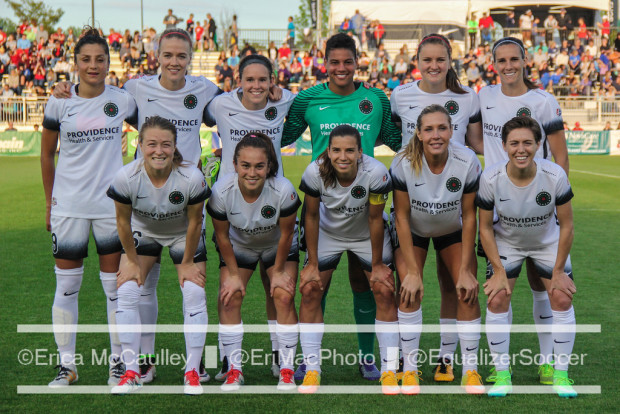 The Thorns regulars were outstanding, but it took the entire roster and more to win The Shield (photo copyright EriMacPhoto for The Equalizer)

On July 30, Allie Long was dozing off in her hotel in Brazil watching the stream of her Portland Thorns against the Seattle Reign. The Reign carried much of the play that night, but were unable to break through against a stout Thorns defense. Finally, in the 74th minute, Nadia Nadim scored for the Thorns and they would win the match 1-0.

“That was the turning point I think in our season when I saw them beat Seattle,” Long said Sunday night after scoring two goals to help the Thorns win their first NWSL Shield. “Honestly that was the best part of the season for me was seeing that. It was inspiring and it was just so incredible to see.

“I couldn’t fall asleep that night.”

The Thorns journey to the Shield began with an ambitious offseason that included the acquisitions of, among others, Nadim, Lindsay Horan, Meghan Klingenberg, and Amandine Henry. There were several key steps along the way including the team kicking into gear almost immediately and going through its first dozen games without taking a loss. But it was the set of games when Long and so many others were on international duty that made it possible for them to stand on Yurcak Field on Sunday as champions of the regular season.

“The cool thing that we’ve been able to say in the locker room is that every single person—even players who are not on the team right now or who are not contracted—has played a part in this,” Michelle Betos said. “There are names of players you’re never going to hear that have made all the difference this year. That’s what’s really special about this club.”

We’ll help out with some of those names. Maureen Fitzgerald started two of the three matches she appeared in including an 87-minute stint in the July 30 win over the Reign; Jennifer Skogerboe went the full 90 that night. McKenzie Berryhill (now with the Pride), Sam Lofton, and Shade Pratt also made appearances during the roster letting. Part-time players like Mallory Weber and Celeste Boureille were both on the field for every minute in the month of July.

“We filled this roster with character,” Thorns coach Mark Parsons said. “That Seattle win in that Olympic break is the reason we’re here. Beating Sky Blue (July 2 in Portland) is the reason we’re here. It’s the tougher nights. On good nights talent will win you games, but on tough nights it’s character, it’s togetherness, it’s fight. It’s a culture that the people want to be in to fight to the death.”

Parsons also pointed to a match early in the season, in Washington, that allowed the Thorns to ultimately capture the Shield. In one of the better matches of the season, the Thorns grinded out a 0-0 draw at the Maryland SoccerPlex. Parsons said, “we could have been down 3-nill.”

That was the fourth match of the season for the Thorns and perhaps the one that showed just how well the amazing collection of talent was morphing into a team. It was a process, Parsons believes, that happened quicker than he anticipated.

“I think it happened quickly because we got the recruitment right,” Parsons said. “We started committing to playing better soccer earlier than I thought we would. This season was about getting this team back to where it needed to be which is playoffs. We’ve done that and now we’ve got a home playoff that sets us up. That’s what it’s all about.”

Long suggested that the reason the Thorns were able to turn talent into team so quickly is that the players tend to think the same way about the game.

“We all have a similar soccer brain,” she said. “Everyone is super intelligent on the ball. They watch the game. They study the game. They want to share the football and get it back. When you put those players together it’s so much easier than having just athletes. When you bring together soccer brains who love the game and want to play the same style, the sky’s the limit I think for this team. It’s awesome to see.”

Added Betos: “When there’s a lot of personalities and a lot of talent you never know how it’s going to gel. We’ve really come together. I think the special thing is the players on our team, everyone’s a good person too. That makes it a ton easier. We all want to play each other.”

As the moments wound down, Thorns bench players were standing in anticipating of the club securing another trophy to go with the 2013 NWSL Championship. The celebration was measured though, with eyes clearly looking ahead to Sunday’s semifinal against the Flash and, if that goes well, a trip to Houston to play for another piece of hardware.

“If you look across the leagues in Europe they don’t even play a playoff,” Betos said. “It’s about who’s the most consistent, who does the best in the league. We want to be that team and we feel like we have every capability to do that. To be able to actually do it—Chicago helped us out (Saturday) night—it’s pretty incredible. This means a lot to us.”

We just wanted a chance and that’s what we got.