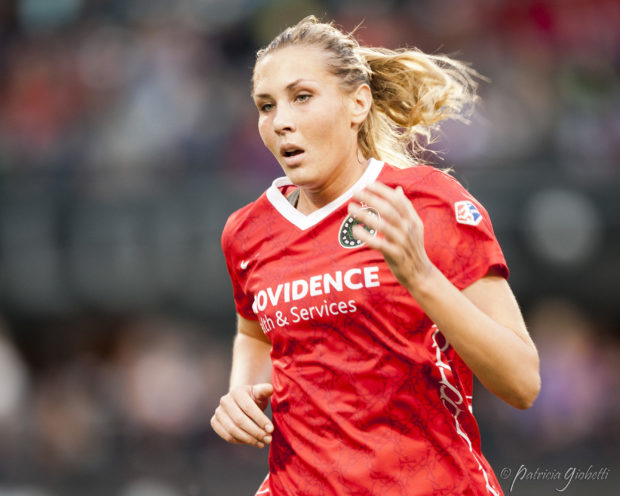 Allie Long was with the Thorns when they won the 2013 NWSL Championship. A draw or better on Sunday will add the 2016 Shield to their collection. (Photo Copyright Patricia Giobetti for The Equalizer)

The playoff spots are locked up, but the Shield and the Golden Boot are still up in the air. Sky Blue has one final chance to play spoiler on the last day of the 2016 NWSL regular season.

With Washington’s loss to Chicago on Saturday night, the Shield remains within Portland’s grasp. A win or a draw against Sky Blue, and the first hardware of the season is theirs. Many will remember the Thorns’ last game against Sky Blue as one of the best this season, and if this game is anything like that, it will be exciting until the very last minute. The Portland attack is firing on all cylinders – from the wings, up the middle, from distance, on set pieces – no matter where the ball is, they are capable of scoring. Shots from distance will be their ticket, as Sky Blue can be very tight in the box but both Casey and Stanley are susceptible to long shots. Look for a good matchup in midfield between Amandine Henry and Raquel Rodriguez.

Sky Blue took a while to get going and was marred by injury, but they emerged in the second half of the season as a playoff contender, falling just short. If anyone is best poised to play spoiler, it’s the team from Jersey. The backline has become one of the better groups of defenders in the league, and they’ll need to continue their disruptive play against Portland’s attack. With Leah Galton questionable on concussion protocol, look for the flank attack to flow from Kelley O’Hara, who will try to link up with Sam Kerr in the middle. The strength of Sky Blue’s attack is their speed, which they’ll need to use to their advantage to catch the Thorns defense on a high line. A win would move Sky Blue up to sixth place and potentially fifth if Seattle draws or loses. A draw and Seattle loss will also equal sixth.

With Western New York’s win over Boston on Saturday, Seattle is officially out of the playoff race, as their late-season push came just too late. This will be Keelin Winters’ last professional soccer game, so the Reign will want to end her career on a high note. Merritt Mathias at right back has its drawbacks, but the move appears to have settled Seattle’s defense. She will face a tough challenge against Kealia Ohai. On the other end of the pitch, Megan Rapinoe appears to be settling back into the game and will likely trouble Lydia Williams in goal all night long. Both teams are quick on the counter, so expect this game to be played from end to end.

Houston is set in eighth place for the year, although a win would give them their most points in a season so far. Playing for pride, a high note to end the season, and a win against Seattle for the first time, the Dash have nothing to lose. All that’s on the line is Ohai’s chance at the Golden Boot. Currently one goal behind Lynn Williams, she needs two goals or a goal and two assists to win. It’s a tall order against Haley Kopmeyer, but with the exception of the game in Portland, the Dash have spent the second half of the season making up for the lack of goals in the first. Carli Lloyd has made an impact in every game since her return and will be one for the Reign to play close attention to. The question for the Dash remains their defense. They’ve struggled all season long to maintain defensive shape for the full game, and one slip could give Rapinoe or Kim Little the space they need. The best way for Houston to end the season would be with a shutout.