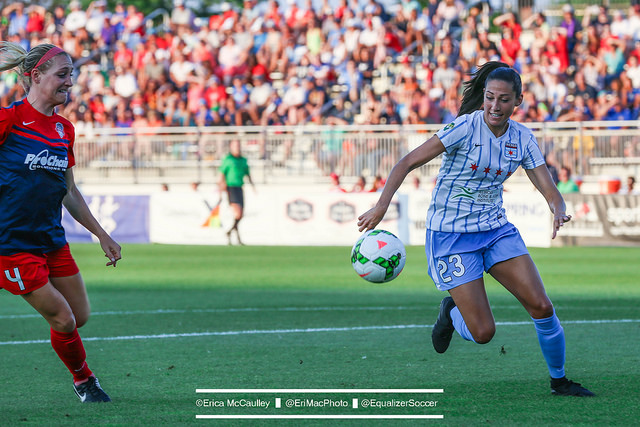 For the second time in as many matches the Washington Spirit tasted defeat when a victory would have clinched the NWSL Shield. Saturday’s 3-1 loss in Chicago, their first loss to the Red Stars since 2013, kept the door open for the Thorns who can now win the Shield with a draw or win at Sky Blue on Sunday. The win clinched 3rd place for the Red Stars and they will visit whichever team between the Spirit and Thorns does not win the Shield.

The Red Stars pounced early when Vanessa DiBernardo played a fantastic pass to Christen Press who found space behind a broken down, left side of the Washington backline. Press dribbled end line where she was picked up by center back Estelle Johnson. Press cut the ball back toward the middle and her next touch beat Kelsey Wys for her 8th goal of the season.

The Spirit settled into the match and seemed to be gaining traction when another defensive breakdown struck. In the 26th minute, DiBernardo laid a ball back to Sofia Huerta and then sprinted away to stretch the defense. Huerta fought her way around Tori Huster’s tackle and gave it to Cara Walls. As Caprice Dydasco backed away from Walls she dribbled into the box and placed her shot by Wys to make it 2-0.

Hopes for an second half comeback were scuttled in the opening minute. This time Huerta did it herself, again beating Huster, this time to the end line. On her way there she lifted what looked like a cross and it found its way over Wys’s head and into the far corner for 3-0.

Right off the ensuing whistle, Crystal Dunn dribbled to the top of the box and her shot meandered through the Red Stars’ defense and barely eluded Michele Dalton to make it 3-1. But that was as close as the Spirit would get. They created several more chances but were either too passive in the final third or ran into an in-form Dalton who subbed for Alyssa Naeher and her sprained wrist.

Despite ending the season on a two-game losing streak the Spirit (12-5-3, 39 pts) will host a semifinal for the first time in club history. That match will be Friday night against either the Red Stars (9-5-6, 33 pts) or Flash. Earlier Saturday the Flash locked up the final playoff berth by beating the Breakers.