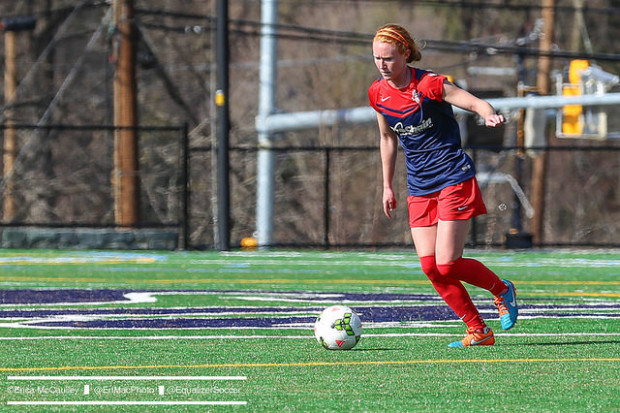 Tori Huster has made more appearances in a Washington Spirit kit than any other player. (Photo Copyright Erica McCaulley for The Equalizer)

I caught up with two of the Spirit stalwarts, Tori Huster and Diana Matheson, the club’s all-time leaders in appearances and goals scored respectively, to speak about the accomplishments of the club this season and the team’s rise from the bottom of the table in 2013, to battling it out for the regular season title. The two seemed at ease, ribbing each other when the opportunity arose, confident, yet relaxed, as the Spirit set their sights on lifting some hardware.

No matter where the team’s been in the standings, one thing has remained constant–the Spirit have tried to remain positive. Matheson pointed to this as a key in their steady improvement since the inception of the club.

“Anyone who’s been here it’s been a positive group, no big egos and I think that’s what kind of draws new people in… There’s a good group of players, blue collar, hard working and we get to play on amazing grass fields every day,” Matheson said. “I think we’ve just been able to get good people and good players and just build the level every year.”

Some of that positivity was on display during the home regular season finale against the Reign. The Spirit had two potential momentum shifting moments go against them in the first half of play. The first, Cali Farquharson suffering a significant injury just minutes into the contest, and then Christine Nairn missing the frame on a penalty kick late in the half.

The team responded quickly. Nairn’s missed penalty kick came in the 41st minute and Crystal Dunn delivered a goal in first half stoppage time to give the Spirit the advantage going into the break.

“I think playing at home is something we hold near and dear to us,” Huster said about the negative start of the match and playing at home. “We’re not going to let anyone come into our house and make it easy. Whether we are up a goal, down a goal, no matter what, it’s going to be hard to play against us and I think that’s been something that we’ve kind of as a core group always said.”

The numbers support Huster’s statement. Over the past two seasons, the Spirit have been difficult to topple at home.  In fact, the team’s only recorded two losses at home in that span, moving some to dub the Soccerplex, ‘The Fortress.’ Hosting a playoff game at home could be instrumental helping them reach the final which they failed to do in their two previous playoff appearances.

Matheson set her sights on the final well before this season started. With so many returnees from 2015 and new additions like her Canadian teammates Shelina Zadorsky and Stephanie Labbe, whom she encouraged to join her in Washington, she felt from the very beginning that the 2016 Spirit could compete for the title.

“I was trash talking back at national team camp in February saying we were going to win it all,” Matheson said. “I mean I know how we did last year and we had most of the team coming back. I know we had a great base coming in and a little more time together I thought it could only be better.”

Another key to the Spirit’s success this season has been its much lauded depth. Head coach Jim Gabarra has used his bench liberally, making wholesale changes to the starting 11 during the difficult stretch in mid-September when all NWSL clubs had to play three games in eight days.

The depth of the roster also proved vital during the Olympic call ups. The Spirit went 5-1 while most of the players that made the trip to Brazil were away.

“Credit to their professionalism,” Huster said about the importance of role players to the team’s success. “It’s not easy to sit on the bench and watch other players play and be called upon. They’ve kept their fitness up. They’ve kept their level up and I think that just says a lot about them as individuals.”

Of course, talk of the playoffs is a bit premature. At present, the team has their sights set on the hoisting the league’s regular season trophy. Washington, who have a tendency over the years of failing wrap up playoff spots earlier in the season when the opportunities arose, similarly failed to secure the top spot in the playoffs before the final game of the season. Saturday night, they’ll face the Chicago Red Stars. The Spirit control their own fate, a win and the trophy theirs.