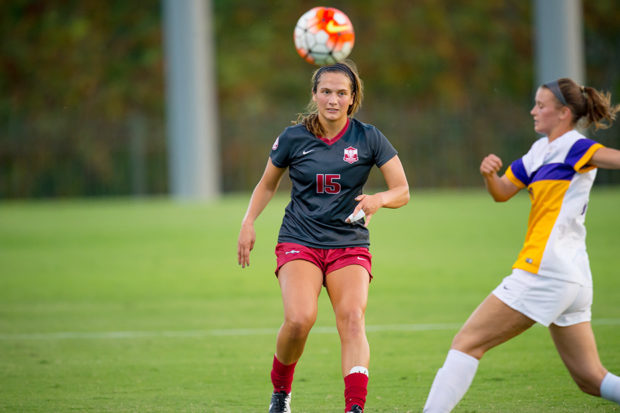 Week 5 of the college soccer season again brought some shocking upsets. This time around, however, most of those upsets happened in conference play. All in all, it’s shaping up to be an unpredictable season in college soccer. Here’s a look at the week that was in NCAA soccer.

Earlier this season Arkansas downed then number two Duke 2-1. Friday night, the Razorbacks added another historic program win to their ledger with a 2-1 win over number 4 Florida. Jessi Hartzler scored both goals for the Razorbacks in a less than three-minute time span in the first half. Meg Dougherty Howard got one back for the Gators just after the second half began but Arkansas was able to maintain the one goal advantage despite Florida recording 15 shots to Arkansas’ 3 in the second half. Cameron Carter recorded 8 saves for the Razorbacks.

The enduring image from Friday’s memorable victory, however, didn’t happen on the playing field. Arkansas Athletic Director Jeff Long celebrated the win by enthusiastically sliding into a puddle. That’s what dry cleaners are for, right? Hopefully, Mr. Long’s celebration can start a trend. How lovely would it be to see athletic directors so excited about their women’s soccer teams? Have a look at the celebration if you haven’t already.

When you beat your second top-5 ranked opponent at home your AD celebrates in style. pic.twitter.com/fv6dsmI6Te

Kia Rankin delivered North Carolina State’s second win in school history against the Tar Heels last week, with the previous win coming all the way back in 2002. Rankin’s goal came in the 67th off a pass by Paige Griffiths that opened up North Carolina’s backline.

The story of the night was Sydney Wooten in net, however, as the sophomore keeper amassed a season-high eight saves en route to the team’s fourth straight shutout. Where the Wolfpack was efficient on offense, scoring on one of its two shots on goal, the Tar Heels were unable to convert despite having a decisive advantage in shots.

The inability to generate offense has been a recurring theme for the Tar Heels at times this season. If the Tar Heels don’t start finding the back of the net with regularity, it may be a season to remember for all the wrong reasons in Chapel Hill.

One week after downing the previously unbeaten Virginia Cavaliers, Georgetown beat another top ranked program, West Virginia. Arielle Schechtman had big shoes to fill after to transferring in from UCLA and taking over for the now departed Emma Newins. Last week, she showed she was more than up to the challenge, holding both West Virginia and a top mid-major program George Washington scoreless. She earned Big East Goalkeeper of the Week honors for her efforts. More importantly, the Hoyas recorded 1-0 wins in both contests. The Hoyas, who are traditionally known for their technical ability on the offensive side, have shown they can also play solid defense.

The win against West Virginia came in dramatic fashion coming in the second overtime period. Senior Grace Damaska delivered the winner on a long-range shot in the 102nd minute. The Mountaineers outshot the Hoyas 23 to 8 in the contest.

And Then They Were Three

With Week 5 in the books, only three teams can claim an unblemished record–Central Michigan, Northwestern, and South Florida. Northwestern is the sole team from a power five conference with a perfect record and they’re the only team at 9-0.

Even after a solid season a year ago capped off by an NCAA tournament berth, it’s safe to say the so far Northwestern has exceeded expectations. In the preseason Big Ten preseason poll, the Wildcats were picked to finished mid-pack in the conference.  Northwestern added wins against Purdue and Indiana this past weekend. Purdue and Indiana  aren’t exactly powerhouses in the Big Ten and Northwestern’s non-conference schedule wasn’t terribly tough, nonetheless winning 9 straight is difficult to do in the beautiful game. Can Northwestern continue its hot play as conference play continues?

Savannah Jordan moved into sole possession second place all-time in both Florida and SEC conference history over the weekend with this tally against Central Florida.

The only person above Jordan in SEC and Florida’s all-time scoring lists? The one and only Abby Wambach. In order to overtake Wambach on that list, the current Florida forward would need to score 25 more goals this season. That’s not impossible but seems unlikely.

Jordan’s blistering scoring pace shouldn’t be discounted though. Among active players, she’s first in goals per game, total goals and total points. In most of these categories, it’s not even close. For instance, Jordan has 14 goals on the next active players. In sum, some NWSL club will be happy to add her to their ranks come January. Enjoy watching her terrorize opposing defenses in the college game while you can.