England win, US last at U-20 NTC Invitational 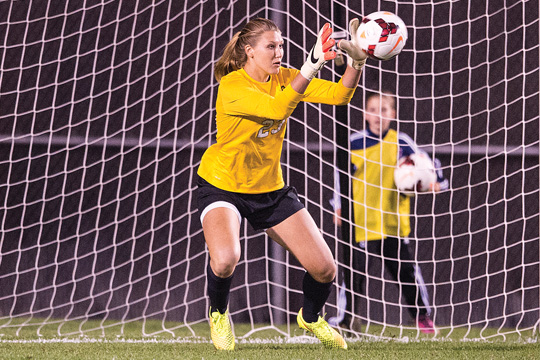 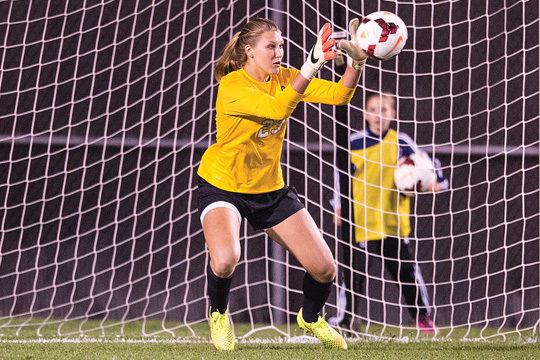 Casey Murphy of Rutgers saw time in goal for the U.S. U-20s over the weekend (photo: Rutgers)

The US U-20s went without a single goal in the 2016 NTC Invitational ahead of the FIFA U-20 World Cup. The tournament consisted of three other teams: Brazil, England, and Korea Republic. England came out the victors, securing the title on the second day of competition.

The tournament opened with England taking on Brazil. Sarah Mayling scored the lone goal of the match for England in the 89th minute on a defensive lapse by Brazil. As Natasha Flint played the ball into the penalty area, Daiane Santos Silva failed to take control of the ball and it landed in the path of Mayling who buried it off the inside of the far post and in for the win.

The USA had their first match against Korea Republic. Although the Koreans had several good opportunities to score, US goalkeeper Casey Murphy came up with big saves to keep the Americans in the game. However, they were unable to find the back of the net through 90 minutes and the match ended 0-0.

Brazil and Korea Republic played to a 1-1 draw with goals coming just three minutes apart. Korea Republic struck first in the 63rd minute as Chaerin Han finished a diagonal ball inside the penalty area. Her initial shot was saved by Brazil’s Carla da Silva, but she followed up her own rebound to score. However, Brazil equalized as Geyse da Silva Ferreira blasted a shot that was initially saved by Kim Doyun, but it rebounded to Gabi da Silva, who had an easy finish.

The USA carried their scoreless streak into the match against England, and unfortunately for the home side, it continued into the third match as they were shutout. England’s only goal came in the 73rd minute when Mayling played a ball across the penalty area where an outstretched Casey Murphy could not make full contact with it to deflect it out of danger, and Coral-Jade Haines got a foot on it to make it 1-0. After Mallory Pugh went into the match with about 15 minutes to go, the team came closest to scoring as she provided a much-needed spark. She had a couple of chances herself in the final 10 ten minutes, but one shot was right at goalkeeper Sophie Baggaley, and the other went wide left. At the final whistle, it was 1-0 and England won the tournament on this day with six points.

Going into the final day of the tournament, the points didn’t matter as England would finish on top regardless of the results. They took on Korea Republic in a scoreless draw.

The USA finished the tournament against Brazil, who came out victorious by a score of 2-0. Brazil’s first goal came off the foot of Gabi da Silva as US defenders went into each other trying to clear a cross from Victoria de Miranda. Gabi then fought out defenders to get to the loose ball first and finish it past an oncoming Rose Chandler for the lead. The matched remained 0-1 for Brazil until the 4th minute of stoppage time when they did further damage. After Gabi won an aerial battle, Adailma dos Santos carried the ball up the field, then played it over the top to Fernanda Licen who beat Chandler to it a couple yards outside the penalty area and scored into an open net.

USA head coach Michelle French will soon chose her final roster of 21 players for the 2016 FIFA U-20 World Cup, which will be held in Papua New Guinea from Nov. 13-Dec. 3. Interestingly, England, champions of this tournament, did not qualify for the U-20 World Cup.

Mallory Pugh will be on that roster. The Olympic veteran returned from the injury she suffered in Brazil to appear in two matches at this tournament.

The US went all three games without scoring, and after a camp where there was “a ton of focus on our attacking shape, positioning players in spots where we feel we have the greatest opportunity to be successful,” there seems to be cause for concern as the team gets closer to the World Cup, where the US has traditionally done well (three-time champions in seven total competitions).

It wasn’t for lack of opportunities – they simply did not create many quality chances to score. In the entire tournament, they had five total shots on goal (zero against Brazil in the final match). While they did keep a fair amount of possession in each match, they weren’t able to do much with it.  The only goal that the US scored was waived off as Jessie Scarpa was in an offside position when she tapped the ball in against England.

The team has two friendly matches against Venezuela in October, in Florida, as their final games before the start of the World Cup.

After that, the US will fly out to Australia for a final pre-World Cup camp and then head to PNG to begin the tournament, where they have been placed in Group C with France, Ghana, and New Zealand.