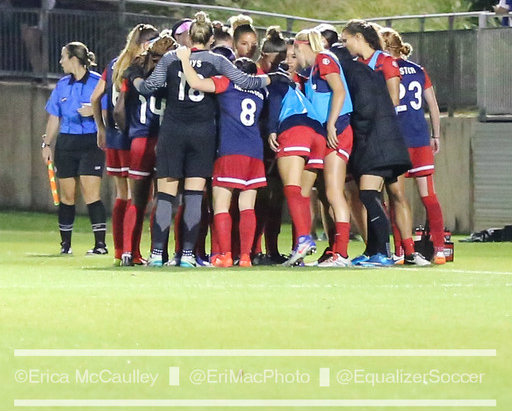 Players for the Washington Spirit collectively issued a statement on Friday noting that they disagree with how their owner, Bill Lynch, over how he handled the playing of Wednesday’s national anthem.

“We respect our owner’s freedom to share his views and we understand his intentions. But as a team we don’t necessarily agree with those opinions or the actions taken on Wednesday evening,” the letter, signed collectively, states.

“We believe in freedom of speech and expression as long as it’s respectfully demonstrated, even when we don’t agree on every issue.

“As a team, we were disappointed we were not informed of the plans for the national anthem or given an opportunity to weigh in on the decision.”

[LAULETTA: Spirit got it all wrong with national-anthem decision]

Prior to Wednesday’s Spirit’s home match against Seattle Reign FC at the Maryland SoccerPlex, the national anthem was played with teams still in their respective locker rooms. The change in timing was done intentionally to prevent Seattle’s Megan Rapinoe from “hijacking our organization’s event,” as Lynch wrote in a statement distributed to media.

After the match, Rapinoe called the move “f***ing unbelievable,” and said she believes based on other events and conversations that Lynch is homophobic. Rapinoe first drew national headlines on Sunday when she knelt for the national anthem in Chicago in an act of solidarity with San Francisco 49ers quarterback Colin Kaepernick.

“Being a gay American, I know what it means to look at the flag and not have it protect all of your liberties,” Rapinoe said on Sunday.

The Spirit won Wednesday’s match, 2-1, which combined with other results on Wednesday clinched the club a home playoff game for the first time ever.

“We regret that a historic accomplishment for the club was overshadowed by decisions that had nothing to do with the match,” the players stated.

[GORDON: What Wednesday night could have been]

Gordon: What Wednesday night could have been
Week 18 Preview: Shield in sight for Spirit; FS1 in Portland