Gordon: What Wednesday night could have been 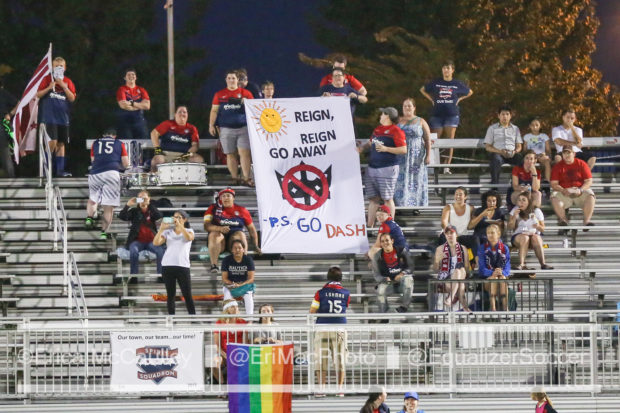 The Spirit Squadron showed up hoping for a trophy, got a home playoff game, but many left angry at their owner. (photo copyright EriMac Photo for The Equalizer)

Wednesday, I got in my car like I’ve done the 42 other times the Washington Spirit have played  at the Maryland Soccerplex to cover the game. During that hour plus ride, I often think about potential storylines surrounding the game, and the implications it has for both sides.

Of course, as a writer, it is far from my purpose to create the story on gameday. That said, I’d be doing the game an injustice if I didn’t do my due diligence beforehand and take stock.

As I drove to Soccerplex yesterday, the storylines surrounding the game seemed pretty clear. I strongly felt that it would be the most important home game the franchise had ever held. I was right, but for all the wrong reasons.

Everyone knew that Seattle Reign FC and USWNT midfielder Megan Rapinoe kneeling for the national anthem was going to be a story – or at least everyone thought it would be until the national anthem was surreptitiously moved. Then, the story drastically changed. Denying Rapinoe the act of protest, and the decision surrounding it became the only stories of the night.

To be clear, Rapinoe is trying to bring attention to an extremely important societal issue and it should merit media coverage. I don’t mean to belittle or detract from this at all.  I feel strongly that it is a story and should continue to be a story.

{LAULETTA: The Spirit made all the wrong moves}

The actions of Washington Spirit owner Bill Lynch guaranteed that this was the ONLY story to come out of the contest. He made clear in his now infamous statement that part of his reasoning behind moving the national anthem was to ensure focus stayed the game and the opportunity for the franchise to secure a home playoff game for the first time. The Spirit did just that, but the reality is, by the time the whistle blew, it mattered little as far as news coverage was concerned.

“That tells its own story,” Seattle Reign head coach Laura Harvey said about the Spirit’s accomplishments not being discussed postgame.  “The last thing we’re speaking about is the game and I think it wouldn’t have been that if the anthem had been played and it wouldn’t been that if stuff hadn’t gone out publicly so I think that in itself shows that maybe the decision that whoever made it made has had its adverse effect.”

Harvey’s spot on here and the decision of the owner does a disservice to so many people involved in the organization. The fans, the staff, the volunteers and especially the players, deserved better.

For a few hundred words, let’s discuss what Wednesday night’s game could have been about if the national anthem had gone on as usual and Rapinoe had knelt. (How much these items should have been the focus of the game is a subject of another debate)

It could have been about Crystal Dunn scoring her first goal of the season. After last year’s goal explosion and ultimate pick-yourself-up when you’re down season, Dunn’s played an important, albeit different, role this year that hasn’t given the forward as many opportunities to score.

Against the Reign, she finally opened her account with a tremendous strike from just outside the box. Arguably, Dunn doesn’t score that goal a year or two ago. That goal shows how her game has improved since she was drafted three years ago.

Another interesting wrinkle to this story, in 2015’s semifinal between Seattle and Washington, the last time these two sides met, Harvey brilliantly siphoned off service to Dunn, which in terms of last year’s Spirit team, was the equivalent of cutting off a snake’s head. This year, Dunn scored, but even if she hadn’t, there are plenty of other players that are capable. It makes game planning for the Spirit certainly more complex.

Alternatively, a possible storyline could have been the unfortunate end to Cali Farquharson’s rookie campaign. During the season opener at the Soccerplex, Farquharson being equal parts overjoyed and overwhelmed at making her professional debut was one of the major storylines of that first match and honestly my favorite to come out of the Soccerplex this season. It was a moment that was embraced, not by just by Spirit fans, but women’s soccer fans generally. The letters ACL are also universally feared by women’s soccer fans the world over, so I feel confident in saying that the women’s soccer community, not just Spirit fans, wish Farquharson all the best in her road to recovery.

If you scan the headlines, the story that is really missed is what the Spirit accomplished last night. After an inaugural season that was historic for all the wrong reasons, Washington has earned the right to host a playoff game. In four seasons the Spirit have gone from absolutely woeful, to plucky overachievers and finally, serious title contenders. That is quite an accomplishment in professional sports where it’s not uncommon for teams to get marooned at the bottom of the standings for years and years.

At the heart of this turnaround are the three players that have been with the Spirit all four seasons, Ali Krieger, Diana Matheson and Tori Huster. These three have seen and experienced all the ups and downs the club has faced and their contributions to the club are immeasurable. Together with additions like Christine Nairn and Crystal Dunn, the squad has made a complete 180.

This year, the Spirit haven’t been defined by a marquee player, instead, the Spirit have won because of their incredible depth and chemistry. Instead of waking up to pieces about the goal they achieved together, they are bombarded by messages surrounding a decision out of their control.

Obviously, women’s soccer players aren’t in it for the media coverage or plaudits but, last night, these players should have been answering admittedly cupcake questions about the team’s turnaround and what it felt like to know they were bringing the playoffs (and a national tv broadcast) back to their fans.

Instead, they were robbed, not by Megan Rapinoe and her planned peaceful protest, but by their own boss. While Lynch claims that Rapinoe’s actions would “hijack” the important night for his club, it was an inside job. He did it himself.

I did ask Cheyna Williams, who scored the goal that sealed the home playoff game for the Spirit one of those proverbial cupcake questions. Here’s what she had to say about that historic win.

“It’s really nice considering it’s the first time in Washington Spirit history. We’re all really excited we worked hard all season. To be able to have a home game in front of the fans it will be a huge advantage for us as well. Really excited.”

In some ways, there are parallels between the win against the Reign and a win on a Wednesday in 2013 against Chicago. On that occasion, Lupita Worbis lifted the Spirit to their first home win as a franchise. Against Chicago, the Spirit were robbed of the chance to celebrate the game fully as it was called early due to weather. The Spirit team responded to the disappointment by notching another win at home just days later.

Weather, of course,  is a familiar foe that obstructs us all on occasion. The foe that the Spirit faced on Wednesday is more menacing and at times difficult to comprehend. Now the team wrestles with a question fundamental to the “spirit” of democracy. Oh, the irony.

Note on the Spirit Squadron

General consensus among the membership is that they do not condone the ownership’s decision to pre-exempt Rapinoe’s protest by moving up the national anthem. The Spirit supporters group made the decision to chant for Megan Rapinoe in the first half when she wasn’t even in the match.

When I asked for a statement at halftime the group told me this:

“We think the First Amendment gives people the right to speak their minds. It’s disingenuous to force someone’s hands by not allowing them to express their opinion in a peaceful way.”

The decision has also caused members and fans generally to question whether they can continue to support the players when the owner’s ideals are fundamentally opposed to their own. The Squadron have brought “the noise” in the stadium and are undoubtedly part of the reason that the team is hard to face at home. For the owner to have alienated its hardcore fanbase like this is a damn shame.

A member of the Spirit Squadron, who is also a veteran, speaking on the condition of anonymity provided an important statement regarding veterans and the flag.

“Bill Lynch doesn’t speak for veterans. He speaks for himself and to say that he speaks on behalf of veterans… that’s to hijack veterans’ status. That’s what I believe. Veterans are a diverse group. We believe different things and it’s also a generational thing and the flag it is deep in my heart. I have fought overseas. I’ve had people that I know die and for him to say he’s speaking on behalf of all veterans, f*** that…”