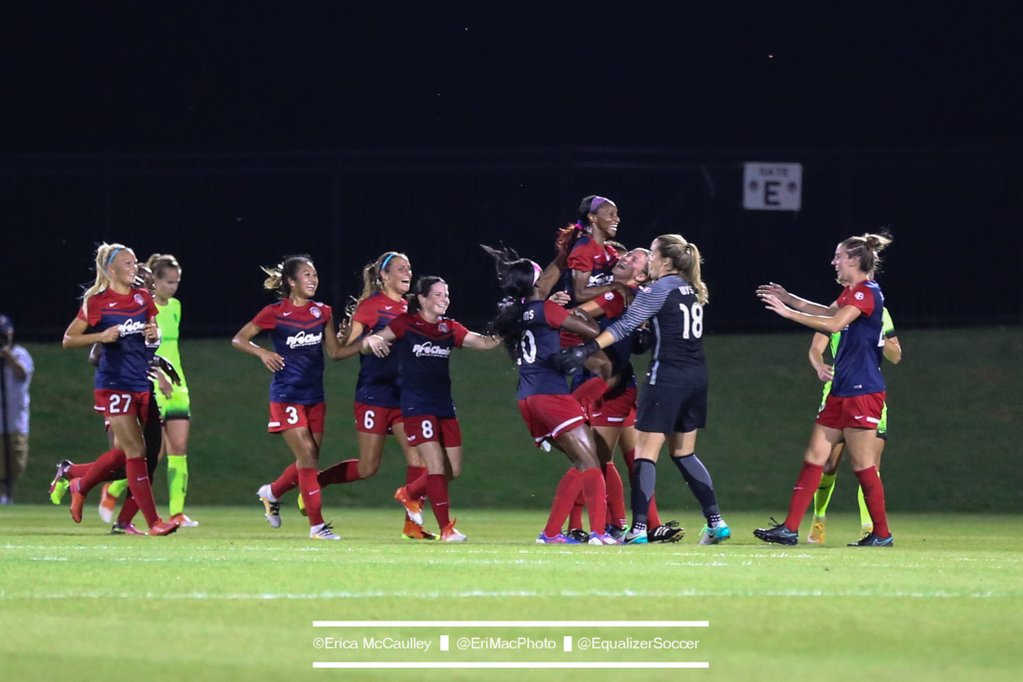 In arguably the biggest game of the night, the Washington Spirit defeated the Seattle Reign 2-1 to clinch a home playoff match. However, it was Spirit owner Bill Lynch’s decision to play the national anthem early to prevent Megan Rapinoe from kneeling in protest that generated the most buzz during the game.

Lynch issued a statement saying he would not allow Rapinoe “to hijack our organization’s event.” After the game, Rapinoe called the decision “f***ing unbelievable.”

On the field, things didn’t go the way the Reign needed them to. With the win over Seattle, the Spirit secure their spot as one of the top two teams in the NWSL this season, clinching them a home playoff match. Despite the loss, the two-time defending Shield winners Seattle Reign are still in the playoff race, courtesy of FC Kansas City’s upset of the Chicago Red Stars earlier tonight, but the odds are slim.

With three games scheduled in eight days, head coach Jim Gabarra played a different lineup, rotating in bench players to give his regular starters a rest. That meant Ali Krieger, Crystal Dunn, Joanna Lohman, Katie Stengel and Tori Huster all started on the bench. However, Dunn subbed in early on after Cali Farquharson was helped off the field after a leg injury.

Dunn, the 2015 NWSL Golden Boot winner, had yet to score this season, but she finally put last season’s ghost to rest with a rocket of a shot past Reign goalkeeper Haley Kopmeyer in first half stoppage time, putting the Spirit in the lead just before half time. Dunn nearly scored again in the second half, but her shot was blocked by Kopmeyer, who failed to the collect the ball. Cheyna Williams reached the loose ball before a Reign defender and knocked it into the back of the net to double the Spirit’s lead.

Crystal Dunn’s first goal of the season helped secure the Spirit a 2-1 win over Seattle on a night overshadowed by controversy. (Photo Copyright Erica McCualley for The Equalizer)

Christine Nairn, usually one of the Spirit’s most solid players, had an off night against Seattle. She failed to convert a penalty kick for the Spirit in the first half, sending her left-footed shot just wide of the goal. She was later called for a handball in the box and the Reign were awarded a penalty kick, which Kim Little easily converted to score Seattle’s lone goal of the match.

The two teams will next travel to Seattle for the second match in their home-and-home series on Sunday. If the Reign draw or lose that match, the two-time Shield winners will be eliminated from the playoffs for the first time since 2013.