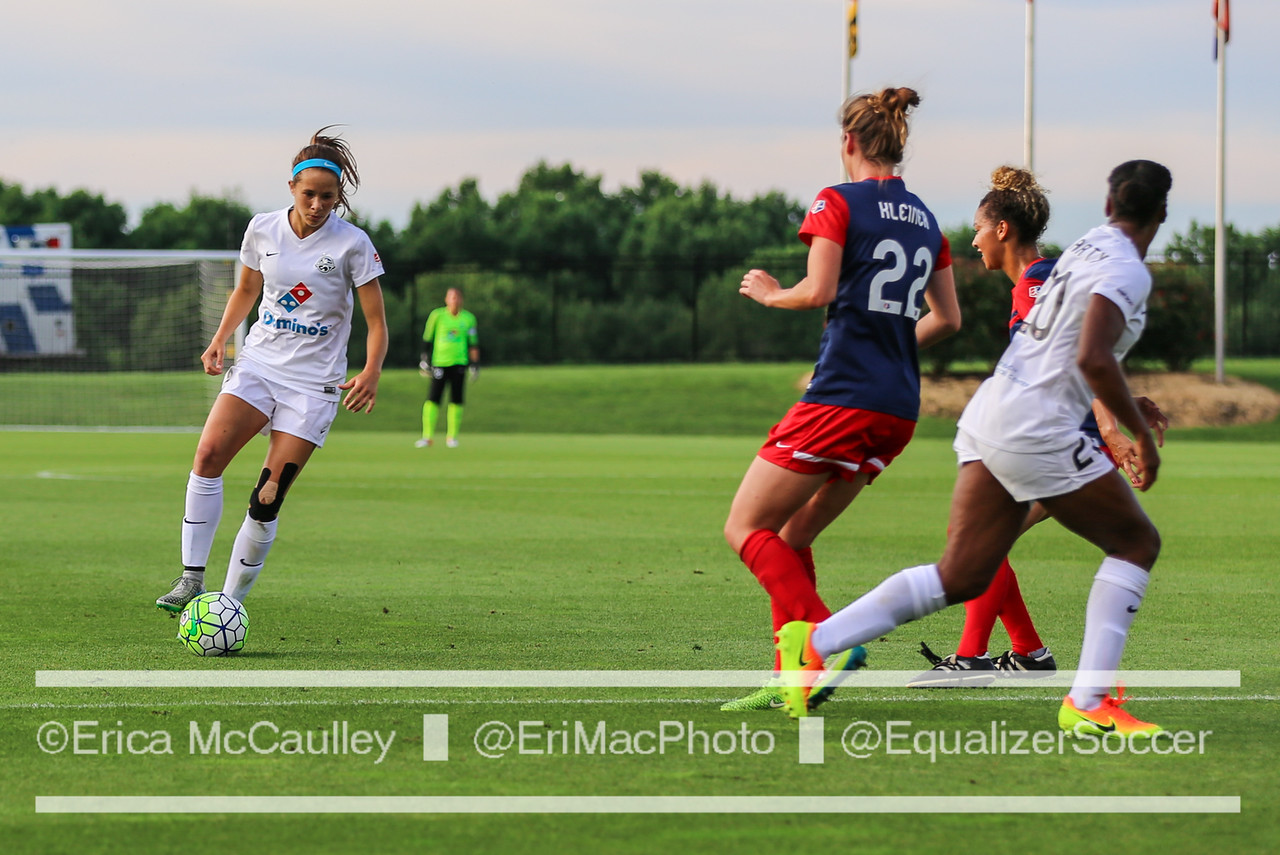 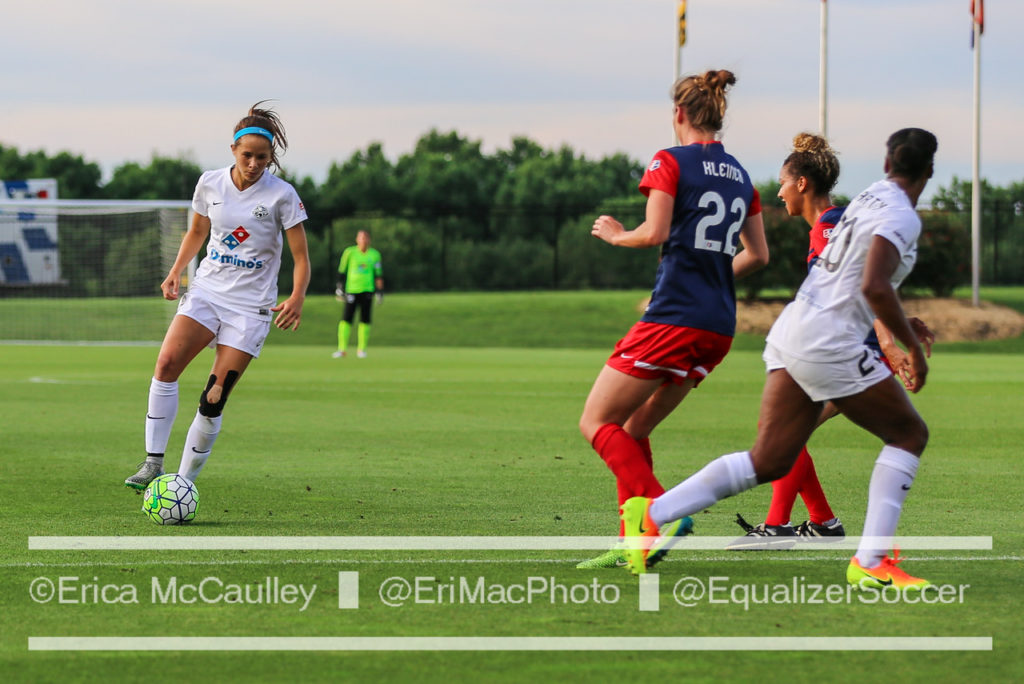 Shea Groom and FC Kansas City, the two-time defending NWSL champions, are all but out of playoff contention. (Photo Copyright Erica McCaulley for The Equalizer)

With the opportunity for both the playoff race and the NWSL Shield to be locked up, every team heads into their mid-week games with their eyes on the prize. Washington aims for hardware, Houston and Kansas City struggle to hold on, and the league makes its 2016 television debut as the NWSL tackles Week 18. My Betting Bonus has an array of promotions that could be used when betting on the NWSL, but before you make your picks, read our previews below for team news and insights.

The last two years in a row, Seattle dashed Washington’s championship hopes by knocking the Spirit out in the semifinals. This year, the shoe is on the other foot as Seattle has found themselves in a must-win situation, while the Spirit could clinch a home semifinal with a victory, the Shield with a win and Thorns loss.

In their last two games, Seattle has found the offense they’ve been lacking all season. Led by Manon Melis, the Reign have steadily controlled possession, moving the ball quickly and pressuring any defense that stands in their way. They jumped to a commanding two-goal lead within 10 minutes against Chicago on Sunday, and had it not been for the combination of an unreal performance by Alyssa Naeher and a silly penalty given away to the Red Stars, Seattle would have walked away with all three points. Seattle wants to pay particular attention to the midfield and be as disruptive as possible against a Washington team that has some of the sharpest and most fluid passing in the league.

The key for Washington will be to put pressure on early. They tend to be a patient team, building play out of the back, but the Seattle defense has been shaky all year and can be prone to fouls or sloppiness if harried enough. Tori Huster and Christine Nairn need to be on top of their game in order to prevent the potentially deadly Kim Little-Jess Fishlock pairing in midfield from controlling the game. Look for Diana Matheson and Crystal Dunn to provide the Spirit’s creativity, roaming the field at will.

Once so solid, the Washington defense hasn’t had a shutout in seven games. Particularly troublesome has been their recent tendency to give up late game goals, including a late equalizer to Western New York last week. Regardless of the various reasons for the breakdown, it’s clear they need to sharpen up in order to make a championship run. Krieger is the captain, known for being vocal on the pitch, and it’s up to her and Kelsey Wys in goal to straighten out the backline. Krieger will also likely be facing Megan Rapinoe at some point, who has brought a late spark of energy in both her Reign appearances this season.

Melis initially made a quiet return from injury, but she made a lot of noise when Seattle hosted rival Portland last week, contributing a brace, before following that up with a goal in the fifth minute against Chicago. With a team-leading six goals in 13 games to her credit, as well as two assists, Melis has found her place in Seattle. The Dutch international is a dangerous striker who will have to be watched, and her mere presence could draw enough attention to open up space for Beverly Yanez or Naho Kawasumi to put one away.

After the goal-fest that was their last meeting, no one would blame Boston for dreading this game. However, the Breakers are a different team now, on home turf, and they’d like nothing more than to play spoiler to the Flash’s playoff hopes. Whether it’s Libby Stout or Jami Kranich in goal, look for Whitney Engen to hold the defense together and keep them from getting stretched out of shape, as the Flash’s speedy wide forwards are so good at doing. Preventing the Flash from getting off the number of shots they are prone to do, such as 25 against Washington on Saturday, is absolutely key for Boston. On the other side of the pitch, they want to get the ball to the feet of Natasha Dowie and Louise Schillgard, as well as the head of Julie King on set pieces.

After making a run in the middle of the season that shocked everyone, the Flash haven’t won since July 9. They’ve proven they can score goals, but in order to secure a playoff run that once looked assured, they need to show they can prevent them as well. Boston may have found their goalscorers too late this season, but they’re here now. The Flash would do well not to underestimate the Breakers at home.

In a bizarre twist of scheduling, these teams have never played each other, but they’ll do so back to back in the last month of regular-season play. Kansas City all but ended Sky Blue’s playoff hopes on Sunday, but taking all six points against Orlando could, with a little help, put them back in the mix. With Kelley O’Hara injured and a quieter than normal Leah Galton, who has taken knocks as well, Sky Blue has lacked a spark on the pitch. Late in games, Christy Holly has even tried pushing Christie Rampone up from her center back position to forward, a spot she hasn’t played since college. Holly has gotten much more out of Sky Blue than anyone expected this year, so look for him to continue searching for a way to generate more offense.

Orlando’s season has had the ups and downs generally associated with expansion teams. Initially starting strong and surpassing expectations, the team took a downward turn when its best players left for Rio and was never able to recover. Although Houston ended their playoff dreams on Saturday, the debut of late signing Lisa De Vanna could lift their spirits and end the season on a high note. It’s no secret the team has struggled to get the ball to Alex Morgan, but if Morgan drops back and plays through to De Vanna, expect the Sky Blue backline to stay busy.

Despite having a rough season, Kansas City has proven themselves capable of playing spoiler and winning unexpected games. They handed Portland their first defeat of the season before also beating Western New York, and last week they put a big dent in Sky Blue’s playoff hopes. Chicago wants to be on their guard not to be the next Kansas City upset. Julie Johnston needs to keep an eye on Shea Groom, who always has her sights on the back of the net no matter the cost, while Casey Short could have her hands full with team workhorse Heather O’Reilly. Look for the always fun USWNT match-up on the other end of the field as Christen Press will try to get one past Becky Sauerbrunn. The Stephanie McCaffrey and Press pairing seems to be paying off for Rory Dames, so if Sauerbrunn manages to shut down Press, the ball should land at the feet of McCaffrey.

[THE LOWDOWN: The latest from a busy week in NWSL]

Kansas City may struggle for possession against Vanessa DiBernardo, although Desiree Scott is one of the best defensive midfielders in the league and will have a few things to say about that. Rookie Katie Bowen will have a big test as she faces the much-lauded Arin Gilliland, whose speed on the flank is among the best. With Erika Tymrak out, Tiffany McCarty should return to the starting lineup and hopes to recreate some of her chemistry with Groom.

It was against Portland that the Dash finally broke their scoreless streak back in July with a solid 3-0 win over the Thorns. Both teams have now returned the majority of their starting lineups from Rio, and while Houston clings to the postseason by a thread, Portland would love three points to inch closer to the opportunity for a semifinal at home. No team has yet managed to shut down Kealia Ohai since she found her form in that July game, and her speed could be more than Meghan Klingenberg can handle. Combine that with a dangerous Rachel Daly, the always energetic Denise O’Sullivan, and Carli Lloyd, who has contributed a goal and two assists in her last two games, and Michelle Betos could be in for a long night.

However, it’s not as if the Thorns don’t have offensive weapons of their own. Every midfielder and forward on the roster is a threat inside the 18, whether it’s Amandine Henry or Tobin Heath setting it up for a teammate, Lindsey Horan coming forward, or Christine Sinclair demonstrating the best finishing in the league. The Dash only have two shutouts this year (one against Portland) and particularly struggle to close out games, a time when the Thorns shine. With the Dash playing on tired legs as it is, defensive sloppiness could be their undoing.

The Lowdown: The latest from Week 17
Spirit play national anthem early to prevent Rapinoe from kneeling