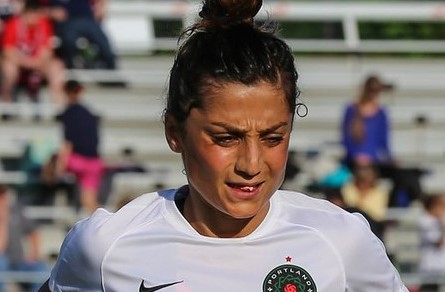 Nadia Nadim became the first player to record multiple hat tricks, lighting up the Breakers on Sunday as part of a 5-1 victory that moved the Thorns within four points of the Spirit in the Shield race with three games to play. Nadim converted from the spot in the 41st minute, got behind the Breakers defense and beat Libby Stout’s attempt at a slide tackle and walked in her second in the 79th, and finished the hat trick in stoppage time when she followed Tobin Heath’s shot off the post with a leaping header. Nadim opened the night with an assist on a Christine Sinclair goal and Allie Long also found the back of the net for the Thorns. Julie King scored for the Breakers to keep Michelle Betos from a clean sheet.

The win was a welcome one for the Thorns who came out of the Olympic break with a 3-1 loss to the Reign. Sinclair returned after sitting that one out to recover from the Olympics and Amandine Henry started and played 64 minutes after being removed early in Seattle. Tobin Heath, who was not listed on the injury report but according to the Thorns broadcast was limited in training all week, came off the bench for the final 27 minutes and played a role in the last two Nadim goals. Besides wrapping a shot off the post she served as a decoy on the previous goal allowing Long extra space to find Nadim behind the Breakers defense.

The loss dropped the Breakers to a dismal 3-13-1 (10 pts) and where they entered the week primed to exit the cellar, now need to win out and get help from the Pride to avoid their second straight bottom-of-the-table finish. In matches at home to the Dash and in Portland this week Matt Beard’s side was outscored 8-2 and never seriously in either match. They face another short turnaround before hosting the Flash on Wednesday. The Flash beat the Breakers twice in Western New York earlier this season by an aggregate.

The Thorns (9-3-5, 32 pts) host the Dash Wednesday knowing a draw will qualify them for the playoffs. They could be in by kickoff though if the Reign lose or draw in Washington earlier in the night.