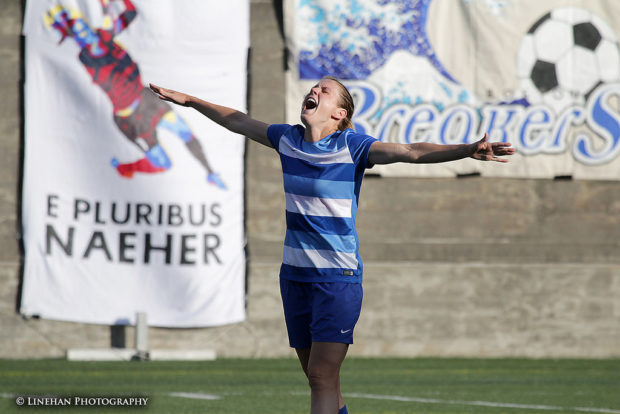 Heather O’Reilly doesn’t always win, but her record in finals is otherworldly. (Photo Copyright Clark Linehan for The Equalizer)

When FC Kansas City won their second straight NWSL Championship last fall, head coach Vlatko Andonovski reflected on his key offseason acquisition, Heather O’Reilly.  One of the things that stood out to Andonovski was her record when her teams get to finals. She had only lost one time he kept saying. Of course you have to get to finals to have success in them, but hat has rarely been a problem for O’Reilly either. She was a state champion in 2001 at East Brunswick High School. But let’s pick up the story in 2003. O’Reilly broke her leg that year—while scoring a goal in her first national team start of course—and could not recover in time to be included on the World Cup roster. Instead she went to play her freshman year at North Carolina which ended in, you guessed it, the national championship.

Here is a closer look at Heather O’Reilly’s career in finals:

O’Reilly went the distance in the final despite taking a late injury. Though she was not directly involved in Lindsay Tarpley’s golden goal, A 17-year old O’Reilly had 4 goals and 6 assists to lift the U.S. in the inaugural version of the event.

There were a few cracks in the armor of unfettered dominance the Tar Heels displayed in the 1980s and 90s as this was the first UNC team ever on which only seniors had previously experienced winning the NCAAs. O’Reilly did her part to make sure that would not happen again for awhile by scoring two goals and adding an assist in a 6-0 thrashing of UCONN in the College Cup Final at what was then known as SAS Stadium (now WakeMed Soccer Park) in Cary, North Carolina. O’Reilly and Tarpley, a sophomore, each had 19 points in the tournament to break Mia Hamm’s school record. As a team it was one of the most dominant tournaments ever as O’Reilly’s squad outscored opponents 32-0 including 9-0 at the College Cup.

In her first major global competition, 19-year old O’Reilly played an integral role. That the United States was playing for gold happened because O’Reilly scored in extra time (after missing an open goal not long before) to beat Germany in the semifinals after Germany leveled it in stoppage time. In the final O’Reilly subbed in after regulation—replacing Tarpley who had scored in regulation—and was on when Abby Wambach finished Kristine Lilly’s corner for the gold medal winner.  Lilly was among a group of veterans that included Mia Hamm who were playing their final major tournament for the U.S.

The Wildcats lost the 2004 final but O’Reilly, who was part of that team, was busy winning a gold medal. She was there for the duration of 2005 and put an exclamation point on the title with a majestic goal near the end of the final to salt it away for the Wildcats.

Three years later, back at SAS, and again the underclassmen were without an NCAA Championship. O’Reilly, already an Olympic gold medalist in her final college game, scored the opening goal in North Carolina’s 2-1 victory over Notre Dame in the NCAA final. Afterwards O’Reilly called it one of the best days of her life.

By now O’Reilly was a regular starter for the national team and she was on for the first 101 minutes of this one including the moment when Carli Lloyd scored the only goal of the night in the 96th minute. The gold medal was O’Reilly’s second in as many visits to the Olympics.

The story of 2009 Sky Blue is something that defies reality even seven years after the fact. Operating under their third coach and paying a visit to the best team in the league for their third match in a week, not many people gave Sky Blue much of a chance. But aided by O’Reilly making the most important play of the day on each end of the field the first-year club downed the Los Angeles Sol, 1-0. O’Reilly scored the only goal on the afternoon and later made the defensive gem of the day with a slide tackle in the box against Aya Miyama.

The only final in which O’Reilly played 120 minutes turned out to be the most painful as the United States fell in penalties after twice leading Japan. O’Reilly sent several dangerous balls into the box that teammates narrowly missed converting but was not directly involved in either U.S. goal. O’Reilly did not take a penalty.

O’Reilly never left the bench for this one but earned her third gold medal in as many Olympic appearances (2016 as an alternate notwithstanding.) She made her mark in the semifinal though. O’Reilly replaced Lauren Cheney (Holiday) in the 101st minute and in the 123rd (yes stoppage time of extra time) delivered a beautiful ball that Alex Morgan finished to give the United States a 4-3 win over Canada and avoid dreaded penalty kicks. That was the first time the U.S. led in the match.

In the rubber match between the U.S. and Japan O’Reilly was again an unused substitute which gave her a prime seat to witness Lloyd’s dramatic hat trick.

Playing as the right-sided midfielder, O’Reilly picked the exact right moment to switch to the left. After Reign right back Kendall Fletcher went off injured in the second half, O’Reilly quickly attacked her replacement Elli Reed and sent a cross to Amy Rodriguez for the only goal of the night.