Mid-Week 17 preview: Breakers look to get out of cellar 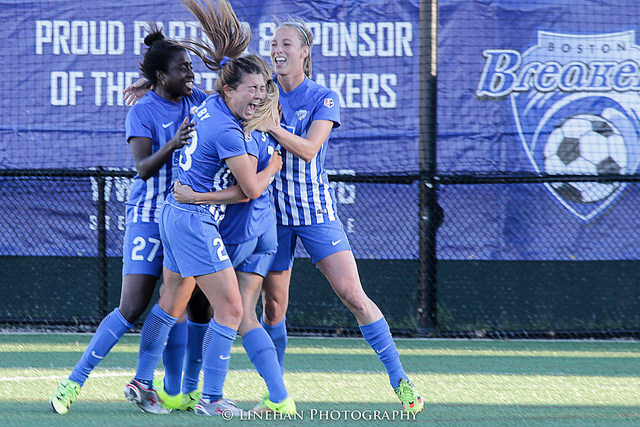 The Breakers have been at the bottom of the table since Week 1. It can end Wednesday with a win over the Dash. (Photo Copyright Clark Linehan for The Equalizer)

With the playoffs officially out of of sight for one and all but unreachable for another, it’s the battle of last place, as Boston and Houston meet for the first time this season.

In a twist of fate few would have predicted even a month ago, this game will determine who sits on the bottom of the table, at least for a few days. A draw or a Houston win, and the Dash will be temporarily safe. A Boston victory, however, will send the Breakers into ninth place by virtue of a head-to-head tiebreaker. Momentum is on Boston’s side; though the first and only team so far to be mathematically eliminated from the playoffs, they’re coming off not only a two-game winning streak, but their first road win since 2014. Houston, meanwhile, hasn’t won a game since a mid-July thrashing of Portland that finally broke their six-game scoreless streak. Although the team has been able to find the back of the net regularly since then, so have their opponents, leading to three draws and a loss. The three points from those draws are the only thing separating the Dash and the Breakers in the standings.

With a number of offensive weapons at their disposal, the Dash should be able to give Jami Kranich’s back line a busy night. The team’s leading scorer, Kealia Ohai, will likely line up against Julie King, who would do well to beware of Ohai’s speed and turns. Rachel Daly is always a threat at center forward, and if Janine Beckie comes close to replicating her Olympic form, Whitney Engen will need to be on top of her game. However, Engen and her partner in central defense, Kassey Kallman, are a pair to be reckoned with and won’t easily be overrun.

On the opposite side of the field, the Breakers look to have finally found their place. Kristie Mewis is back on the pitch, scoring against Kansas City in her return, and Louise Schillgard has settled in nicely, regularly setting up plays for Natasha Dowie, Kyah Simon, and Brittany Ratcliffe. Amber Brooks and Morgan Brian will have to be on their toes to maintain control of the midfield against them. What will possibly set the tone for the game will be the performances of Cari Rocarro and either Cami Privett or Ellie Brush alongside her. Western New York made it look easy to split the centerbacks and find space in front of the goal, forcing Lydia Williams into world class saves that weren’t enough to prevent two come-from-behind goals. If Boston can pull the Dash defense out of shape as other teams have done, they could find that third win in a row.

The English international has been credited with turning things around for Boston, and with good reason. After scoring nine minutes into her NWSL debut, leading Boston to a win over Orlando, she was a consistent threat for Kansas City’s defense. Dowie has quickly proven herself a forward who will not only make runs and get on the end of balls but is willing to drop deeper into the midfield and create chances for other players. Rather like her Dash counterpart, Daly, Dowie is a spark of energy, one who Williams will need to keep one eye on.

Who else? Lloyd will be making her much-discussed return to the NWSL after the Rio Olympics. Some have suggested recent criticism will spark the midfielder to go on the kind of scoring spree she’s known for; others say her presence will disrupt a team that appeared to play better without its stars. When Lloyd is on her game, she’s one of the best in the world, capable of lifting everyone around her, the result of which we saw in the season opener against Chicago (the only full NWSL game she played before her injury). But when Lloyd is off, she can have the opposite effect, and no matter which player appears, one thing is clear: all eyes will be on her.

The Lowdown: another messy re-entry for NWSL
Lloyd, Ohai lift Dash past Breakers, 3-1