Hope Solo will not return to Reign this season 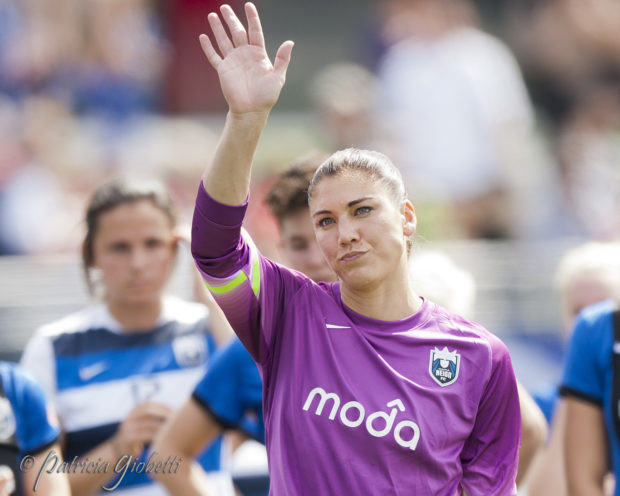 Hope Solo will not return to the Reign in 2016. (Photo Copyright Patricia Giobetti for The Equalizer)

Hope Solo announced on Tuesday that she will not play for Seattle Reign FC again this season. The decision comes on the heels of last week’s decision by U.S. Soccer to suspend Solo for six months and terminate her national team contract. That punishment did not include ending her contract to play for the Reign which is also through U.S. Soccer.  The Reign announced on Saturday, a few hours before their match against Portland Thorns FC, that Solo was granted personal leave from the club.

Coming to terms with the fact that I was fired from the U.S. women’s national team after 17 years of service has been devastating. After careful consideration I have decided to end my season with the Seattle Reign, an organization I love playing for. Mentally, I am not there yet. After watching the team’s win against Portland this weekend and seeing Haley Kopmeyer playing so well in goal, I truly believe this decision is what’s best for me and the Reign organization.

Kopmeyer has long been considered one of the best backup keepers in NWSL and the Reign even protected her in last fall’s expansion draft. The club brought back Andi Tostanoski to serve as second string behind Kopmeyer.

As for Solo, her on-field future now heads into a valley of uncertainty. She will not be eligible to return to the national team until the end of February, if she returns at all. The list of players U.S. Soccer subsidizes is normally announced in January, but how Solo’s suspension from wearing a U.S. shirt will affect the chances she is brought back to the league is unknown. If not she would have to look for a job overseas or return to NWSL for a fraction of her previous salaries.