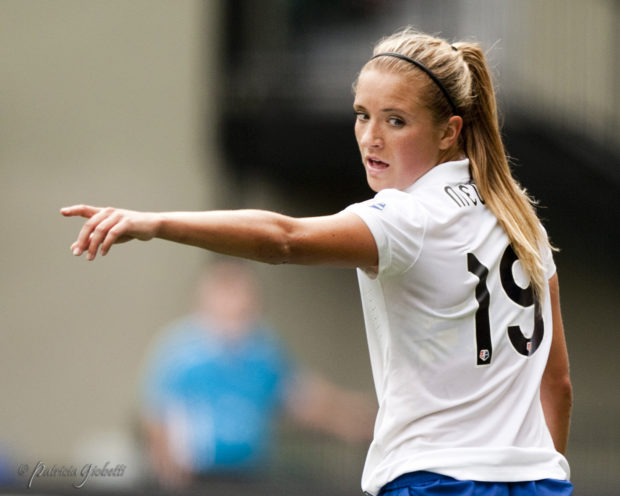 Kristie Mewis scored in her first appearance since June 18. (Photo Copyright Patricia Giobetti for The Equalizer)

Tonight, the Boston Breakers snapped the NWSL’s longest road win drought with a 2-0 victory over the defending champion FC Kansas City. The win was their third overall, but it was the second against the Blues this season, clinching a season sweep for the Breakers. Katie Schoepfer got the Breakers on the board with a screamer from the top of the box in the 38th minute and Kristie Mewis scored the clincher by following her initial shot that bounced off the crossbar and knocking it past a sprawling Nicole Barnhart.

Despite the matchup of teams from the bottom of the table, the game was at times very exciting to watch. After the month-long Olympic break, it was good to see game-action from both sides. Here are some of my other thoughts on the match:

Both sides made mention of the break by comparing the opening minutes of tonight’s game to a preseason match. After the month-long break from game-action it took each team a while to get into a rhythm that would be expected from a midseason game.

BOSTON IS ON A ROLL

Maybe not a championship-caliber roll, but they are starting to gain confidence in themselves and in Matt Beard’s system. Boston still showed some hesitancy early in the game, allowing some near misses from FCKC, but as the game progressed and they kept the Blues off the scoreboard each player began to look more comfortable in their roles, whereas earlier in the season they would be afraid to make costly mistakes.

Mewis, in particular, looked to be gaining confidence with every minute she played. Still trying to make a full recovery from her knee injury, she subbed on in the 53rd minute and got her first shot in the 55th. Her score was pure perseverance, after dinging her initial shot off the crossbar, she was able to follow its path and jump on it before Barnhart could locate the rebound. By the time the Blues keeper knew where the ball was, Mewis had already directed a second shot to the back of the net.

This game wasn’t lost for FC Kansas City because Heather O’Reilly didn’t put in enough effort. Every attack from Kansas City originated from an O’Reilly run, cross or sheer will. She had three beautiful crosses in the first 20 minutes of action, but each time the forward’s shot was wide or missed altogether. Throughout the game HAO was the hardest working player on either side of the ball.

Tonight marked the NWSL Coaching debut for Huw Williams, but it’s one he’d rather not have. FCKC Head Coach Vlatko Andonovski was back in Macedonia after the sudden death of his father last week. Losing a parent is never easy, but being so far from home, I can’t imagine dealing with what he has over the past few days. In true Andonvski style though, he has kept a close watch over his Blues. According to Williams, the two talked on the phone multiple times each day leading up to tonight’s game, and he was not surprised when he found a text waiting for him in the locker room at halftime.