England getting geared up for Euro 2017 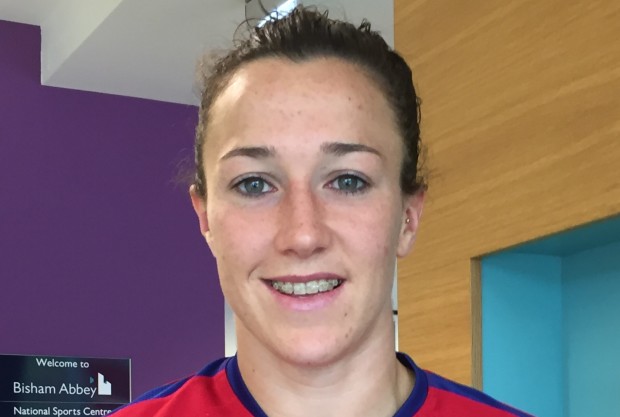 Fullback Lucy Bronze was one of the breakout stars of the 2015 World Cup. (photo credit: Harjeet Johal)

LONDON – The Olympics are over and done with and the next big tournament in women’s football is on the horizon with Euro 2017 kicking off in the Netherlands next July. One particular team is already deep into preparations as England will be looking to build on a successful bronze medal at the 2015 Women’s World Cup. England have already qualified for the Euro’s and Manager Mark Sampson recently assembled a squad of players for a week-long training camp to work towards more continued success for the Lionesses next summer.

How exactly are England’s early Euro 2017 preparations coming along?

“I think we’re in good shape,” said Manager Mark Sampson. “Yeah there’s still a year to go lots of hard work to be done. The objective has been to get a good real assessment of all the individual players, the team and work out where we are, and what’s the gap to where we want to get to. Most importantly we can put all the things in place to give ourselves the best possible chance to close that gap. We’ve got a big twelve months ahead of us, but I think we’re in good shape. We know what we need to do and we’re motivated to do it.”

Manchester City’s Lucy Bronze had a breakout tournament at the World Cup and was arguably one of, if not the best, full-backs to feature in Canada. Bronze and her teammates are looking forward to Euro 2017 and what could be the most prepared England team ahead of a major tournament.

“We’ve had a year to digest the World Cup and get that put to bed and focus on the Euro’s next year,” said Bronze. “We’ve already started putting in a training program to get fit and sharp, putting in a lot of friendlies, and a lot of time spent together next year in preparation for the tournament. I think it’s going to be the best prepared England women’s team has ever been for a tournament.”

The 24 year-old Bronze was an unused substitute during England’s disastrous Euro 2013 campaign in Sweden. A group stage exit ultimately lead to Hope Powell’s departure as manager. Bronze remembers that tournament well as it was one of her first England exposures at a senior national team level. She’s grateful for the experience and is hoping this time around will bring a better result.

“That was my second camp for the seniors,” revealed Bronze. “For me personally as a younger player it was a good experience to be able to see that side of that and then go to the World Cup, where we had a bit more success. I think being so young and having that experience is always good. You never want to have disappointing experiences, but I’d rather have it over and done with and know that I never want to go through it again. It was disappointing, almost embarrassing leaving the tournament in the style that we did.”

England is a different team now with a new and vibrant manager, World Cup success, and a handful of youthful players in the squad. Lionesses veteran Karen Carney is one of a handful of players with well over 100 caps to her name. She has seen her fair share of England squads at major tournaments and believes that England is taking the necessary steps towards more positive results.

“I think sometimes you have to take two steps back to go forward,” said Carney. “I think that’s what we had to do in 2013. In 2005 we finished bottom of the group and in 2009 we finished second, and in 2013 we had a bad tournament as well. Hopefully this one will be good for us. We’ve got a real strong competitive group. We’ve got confidence after our results at the World Cup. I think we’re just a little bit more experienced. Our young players are fresh, willing to listen and learn.”

Depending on which pundits and players you talk to many have varying opinions on which women’s football tournament is the toughest to win. The World Cup features teams from all over the world, with a bigger squad of players. The Olympics is a shorter tournament with less days between matches and a smaller squad. A European Championship features only the top European teams and you only have to win six matches to win a Euro. The style of opponents are a bit similar tactically as well.

“I think the Euro’s are pretty tough because all the nations are quite similar”, admitted Carney. “Where as you play Brazil, they’re quite flamboyant and different. When we played Colombia in the World Cup, they were extremely different, and like Mexico, they all pose different threats for you. I think in Europe they’re all quite similar with methodologies and thought processes. You’re playing more against European players then you would of the World player in terms of Champions League and more regular internationals against European sides, so it’s very tough.”

The current FIFA Women’s rankings have England slotting in at number 5. They are no longer a team that can sneak up and surprise opponents. England have become a team that other teams want to play to measure themselves against.

Are the Lionesses a hunted team that everyone is eager to play and beat?

“I don’t know”, said Sampson. “A lot of people have said that we’ve played teams that have sat back a bit more against us because of our reputation, but that was happening before the World Cup. I think people really didn’t pay attention to those games as they did post World Cup, with all the interest. When you get to a tournament you’re going to play against so many types of different teams. What we’ve got to try and do is have as many weapons as we possibly can so whatever opponent we come up against we can find the answers we need to win the football match. That’s a big challenge because there’s so many good teams in Europe at the moment. I’m sure this team will turn up next year fully equipped to answer any questions an opponent posses.”

England or Team GB rather, should have been at the Rio Olympics competing for a medal. Sweden was able to earn a spot thanks to Team GB not participating. Lucy Bronze doesn’t need any convincing that England is a powerhouse football team.

“You look on paper and you’ve got to say that we are”, said Bronze. “Fourth in the world (England dropped to five in the most recent rankings which came out after this interview was done), still and we finished as the top European team at the World Cup, obviously we aren’t in the Olympics. If you look at the teams in the Olympics, it’s the two European teams in the finals. Those are the type of teams we like to matchup ourselves against. We’ve got to say we’re up there, not yet the best in the world. We’re not arrogant to think that. That is where we want to be and I think we’re closing the gap. That’s what we’re striving towards.”

The best way to become a top standout team in any sport is to win and keep on winning. To be the best, you’ve got to beat the best. England are looking forward to doing just that in the Netherlands next year at Euro 2017 and it all starts with hard work well in advance.

“We want that, yeah”, said Karen Carney, “but the only way to become a powerhouse is to win.”

Notes: The Euro 2017 draw will take place on Tuesday, November 8 in Rotterdam. England will be participating in the 2017 edition of the She Believes Cup in America.