Canada celebrates after scoring the decisive goal against France in the Rio 2016 quarterfinals. (Photo: Canada Soccer)

It’s been almost a week since the Canadian women’s national team secured their second straight Olympic bronze medal and upon reflection, the bronze won last week looks a lot different than the one earned in 2012.

There was much less drama this time around: no border battle with the U.S., no refereeing complaints, no last-minute, against-all-odds Diana Matheson type goal. Instead, what we saw on display out of Canada’s national team was much better soccer. After London 2012, there was a lot of hand wringing and questions about the uncertain future of the program, and whether Canadian sports betting would ever see much interest in CanWNT’s tournament performances. But after Rio 2016, the consensus seems to be that things are moving in the right direction and there is a young core that will carry this team for years to come.

Here are some belated thoughts on Canada’s Rio 2016 and the future:

Much has already been said about the youth in this Canada team and their contributions to this bronze medal. John Herdman not only included nine players 23 years of age or younger in his squad, but he actually gave them significant minutes.

When I think back on Rio 2016, what I’ll remember most is Deanne Rose’s first-ever Olympic goal in that bronze-medal match, Janine Beckie’s combination play with Christine Sinclair, Jessie Fleming’s vision and technical skill in the set-up to Sinclair’s goal against Brazil, Ashley Lawrence’s reliability and versatility, and Shelina Zadorsky and Rebecca Quinn quietly getting things done on the back line. The youth truly ran the show for Canada this tournament and it bodes well for the future.

And while I wouldn’t say that Kadeisha Buchanan had a particularly good tournament, I will say that she bounced back from her mistakes in the semi-final against Germany to play a much better match against Brazil.

[LAULETTA: Five reasons the USWNT was shocked at the Olympics] 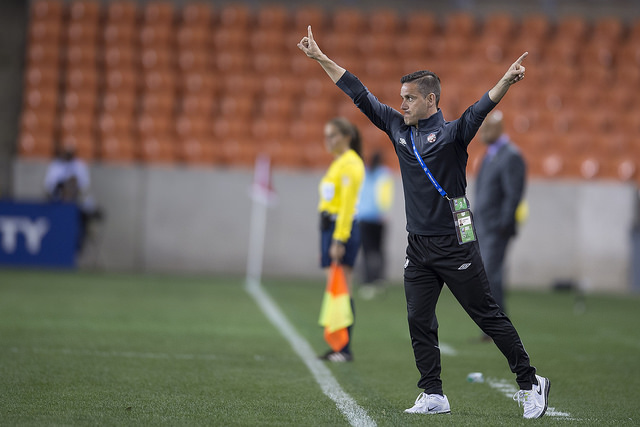 John Herdman did well to manage his roster to another bronze medal. (Photo: Canada Soccer)

After a disappointing exit from Canada 2015 and some, quite frankly, ugly soccer, Herdman deserves praise for the job he did turning the ship around. Mistakes were made in 2015 in team selection, but going young – and actually playing the young players – this year was absolutely the correct call. In Rio, Canada looked like the team that improved the most since the World Cup.

One thing Herdman needs to do in the future is address Buchanan’s aggressiveness and willingness to go to ground when she doesn’t need to. Buchanan does a lot of things right, but this aspect of her game was unfortunately on display this tournament.

Sinclair still deserves to be in the XI

Leading up to Rio 2016 – and heck, even Canada 2015 – I can’t tell you how many times I read that “Christine Sinclair is on the wrong side of 30.” Her role was questioned and there were suggestions from observers that the team might need to begin learning how to play without her.

I think it’s safe to say that Sinclair had an outstanding tournament, and likely silenced these critics. From the opening whistle of the tournament, when she forced the turnover that lead to Beckie’s record setting goal vs. Australia, to her game-winning goal (make that bronze-medal winning goal) against hosts Brazil, Sinclair showed that she still belongs in the starting XI of this team moving forward. Why move away from Sinclair when she’s still scoring goals and setting up her teammates?

By giving Beckie the opportunity to take the penalty kick late in the game against Australia, instead of taking it herself, Sinclair showed once again that she’s not out here to pad her goal scoring stats.

Eventually the team will need to learn how to play without Sinclair. But, health permitting, I don’t think Canada needs to worry about this for another cycle.

NWSL expansion into Canada and (a lack of) semi-pro options

On Monday, women’s soccer twitter freaked out over Meritt Paulson’s latest tweet-and-delete, in which he responded to Charles Boehm saying: “prediction: Van to NWSL in 2018…call it a hunch.”

Of course the “Van” he meant here is Vancouver, and while Paulson made it clear that it was just “a hunch,” the tweets made me all at once excited and skeptical.

The thought of NWSL being stable enough to expand into another country is exciting. Does NWSL need Canadian franchises? No. NWSL could expand into California and New York City or Salt Lake and have the 14 teams by 2020 that commissioner Jeff Plush mentioned. But the league could greatly benefit from having a whole new country introduced to it, with Canadian players and presumably existing infrastructure to rally behind.

Since the inception of the league in 2013, there have been numerous rumors and rejections about Canadian franchises. Duane Rollins has reported many times that NWSL turned down Ottawa’s bid for 2013 because it was too small a market.

In 2013, SI’s Grant Wahl tweeted about rumors of interest in NWSL from Toronto and Vancouver, prompting speculation about potential expansion franchises in Canada being linked to MLS teams.

The Equalizer’s Harjeet Johal has asked Vancouver Whitecaps president Bob Lenarduzzi and other top brass many times about the Whitecaps adding back a top flight women’s team (they got rid of their W-League team in 2012). In 2014, Lenarduzzi said “somewhere down the road we might revisit the professional league,” but in July of 2015, Whitecaps co-owner Jeff Mallett said there was “nothing imminent” on this front.

As for the Montreal Impact, at a recent season ticket holder Q&A event this July, owner Joey Saputo said they turned down the opportunity to have a women’s team.

Out of all three Canadian MLS markets, the one that would be most financially ready to own an NWSL team would be Toronto. Toronto FC is owned by a company called Maple Leaf Sports and Entertainment, which is owned by Rogers and Bell, the two biggest telecommunications companies in Canada worth billions of dollars. MLSE could use the money in the couch cushions of their headquarters to start a women’s team. That being said, Neil Davidson of the Canadian Press reported last year that TFC had not yet considered a women’s team.

All of that is a long way of saying that I am skeptical about Canadian NWSL expansion, but here’s to hoping there is more to Paulson’s tweet about Vancouver than just “a hunch.” A full slate of Cascadia matches in NWSL would be amazing, and Canada needs more playing options for its players than just a few allocation spots.

Canada Soccer owes it to its women’s program to look for solutions. Sure, skilled players will rise to the top and make it in NWSL or other top leagues, but with only so many NWSL allocations, no Canadian NWSL team, the W-League and its Canadian teams folded, and just one Division II women’s team left in Canada (North Shore GSC in the WPSL) and one Division III regional league (League1 Ontario), I can’t help but wonder how many players will fall through the gap.