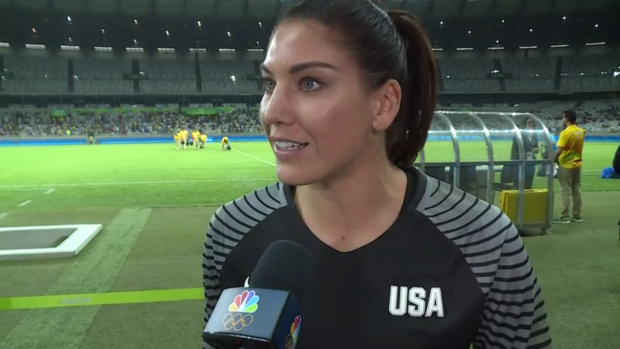 Hope Solo has been suspended six months by U.S. Soccer for her comments after losing to Sweden at the Olympics.

U.S. Soccer on Wednesday suspended Hope Solo from the team for six months, effective immediately, for comments she made to the media following the team’s ouster at the hands of Sweden in the Olympic quarterfinals. The Equalizer has confirmed that Solo’s national team contract has been terminated. She will however, continue to be subsidized by U.S. Soccer to play for Seattle Reign FC in NWSL. That termination of Solo’s contract was first reported by Grant Wahl of Sports Illustrated.

“The comments by Hope Solo after the match against Sweden during the 2016 Olympics were unacceptable and do not meet the standard of conduct we require from our National Team players,” U.S. Soccer President Sunil Gulati said in a release by the organization. “Beyond the athletic arena, and beyond the results, the Olympics celebrate and represent the ideals of fair play and respect. We expect all of our representatives to honor those principles, with no exceptions.

“Taking into consideration the past incidents involving Hope, as well as the private conversations we’ve had requiring her to conduct herself in a manner befitting a U.S. National Team member, U.S. Soccer determined this is the appropriate disciplinary action.”

Solo released a statement through a spokesperson and later via Twitter expressing her disappointment with the decision.

For 17 years, I dedicated my life to the U.S. Women’s National Team and did the job of a pro athlete the only way I knew how – with passion, tenacity, an unrelenting commitment to be the best goalkeeper in the world, not just for my country, but to elevate the sport for the next generation of female athletes. In those commitments, I have never wavered. And with so much more to give, I am saddened by the Federation’s decision to terminate my contract.”

“I could not be the player I am without being the person I am, even when I haven’t made the best choices or said the right things. My entire career, I have only wanted the best for this team, for the players and the women’s game and I will continue to pursue these causes with the same unrelenting passion with which I play the game.”

Rich Nichols, the executive director for the USWNT Players Association, said the punishment would be appealed.

We have been notified by the U.S. Soccer Federation of the suspension and termination of Hope Solo’s contract. Given the cited conduct and alleged policy violation, we believe the proposed discipline to be excessive, unprecedented, disproportionate, and a violation of Ms. Solo’s First Amendment Rights.”

“We also question whether this action would ever have been taken against a male player or coach, who, in the heated moments after a frustrating defeat, questioned the tactics of the opposing team. Needless to say, we will file an appeal on Ms. Solo’s behalf.”

The quarterfinal exit marked the earliest loss ever for the U.S. at a major international tournament. Sweden engineered the upset by remaining in a defensive posture for nearly all of the 120 minutes which ended 1-1. Sweden then won on penalties even as Solo changed her glove ahead of Lisa Dahlvist’s deciding spot kick. The bunker tactics did not sit well with Solo who made her feelings known in the postgame mixed zone.

“I thought we played a courageous game. I also think we played a bunch of cowards. The best team did not win today. I strongly and firmly believe that,” Solo said as part of her postmatch comments that afternoon.

[LAULETTA: Five reasons the USWNT was ousted in the Olympic quarterfinals]

Sweden brushed off the comments, but Alex Morgan and Megan Rapinoe have since gone on record saying they did not share the sentiments.

The suspension is the second for Solo in the last year and a half. In 2015 she was banned for 30 days after she was a passenger when her husband was arrested for Driving Under the Influence. It turned out they were in the team van at the time of the incident. U.S. Soccer never specified that Solo was suspended for the van incident, only that she had made a ‘poor decision’ during national team camp.

In 2007, Solo spoke out following the U.S. loss to Brazil in the World Cup semifinal. Then coach Greg Ryan made the odd decision to bench Solo for the match in favor of Briana Scurry who had a difficult evening. Solo took it upon herself to step in front of a camera postgame and took Ryan to task.

“There’s no doubt in my mind I would have made those saves,” Solo said at the time. “And the fact of the matter is, it’s not 2004 anymore. It’s 2007, and I think you have to live in the present. And you can’t live by big names. You can’t live in the past. It doesn’t matter what somebody did in an Olympic gold-medal game in the Olympics three years ago.”

The team exiled Solo and she was not on the bench for the third place match. Ryan was fired soon after and replaced by Pia Sundhage. Under Sundhage’s firm but gentle guidance Solo was welcomed back into the team and played one of the best games of her life to beat Brazil in the 2008 gold medal match.

Solo has also run into trouble away from the pitch. In 2014 she was arrested on domestic violence charges. Neither U.S. Soccer nor Seattle Reign ever officially acknowledged the charges though Solo missed one match for the Reign. Charges against Solo were dropped in early 2015 but was reinstated later in the year via appeal. The case has not been resolved.

Earlier this year Solo passed 100 career shutouts, a milestone widely lauded and promoted by U.S. Soccer. She has been awarded the Golden Glove as the best goalkeeper at the last two World Cups.

[GORDON: What now for the USWNT? A long three years await]